Wintergreen Resort golf community on the market -– sort of

Residents of the Wintergreen Resort in western Virginia can hardly be blamed for being confused about the motives of the ownership of their combination skiing and golf community. Jim Justice, the fabulously wealthy West Virginian who arguably saved the famed Greenbrier Resort and, in 2012, exerted similar magic by buying Wintergreen out of near bankruptcy, has announced that he will accept viable offers for Wintergreen.

"We would listen if somebody had a great plan for the resort,” Justice told the Associated Press, “if somebody came in from Vale and they had a great plan to really improve something. But we don't really do anything with partners."  According to our sources in the community, the announcement came out of blue, especially after Justice invested $12 million in snowmaking equipment and the resort’s restaurants and transitioned to private membership Wintergreen’s Devil’s Knob Golf Club, which sits at the very top of the community’s mountain, steps from where skiers start their runs in winter. Wintergreen features another 27 holes by Rees Jones at the bottom of the mountain. 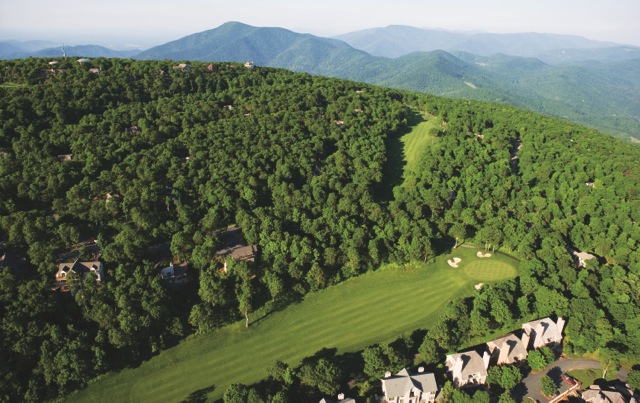 Up There: Devil's Knob golf club at Wintergreen Resort has gone private beginning this season.

"It's a heck of a property," Justice told the AP. "But in my world, if it's just being something that's making great money, that's not good enough for me. It needs to mean more to me."

One wonders what it meant to him when he plunked down $16.5 million for the property just two years ago and then the additional $12 million. Of course, if some development company comes by soon and makes Justice a tidy profit, we may rethink how odd his reasons appear to be. He does not appear to be in any specific hurry to sell at any price.

"If the right person fits, sure we'll sell it," he indicated to the AP. "If that doesn't happen, we'll still own it."

In the meantime, the residents of Wintergreen may seem as if they have stepped back in time a couple of years.

Condos, as well as single-family homes at Wintergreen are sharply priced, including a 3 BR, 3 BA unit listed currently for $128,000 that sits by the 18th tee of the Devil's Knob course.  Go to GolfHomesListed to review a selection of properties for sale at Wintergreen.

More in this category: « The hidden charms and bargain real estate of mid-sized southern cities Initiation Rites: Trial membership lets you kick tires before you join »
back to top
Back to Top