Many golf rounds end in a beer. As you putt out on the 18th hole, how often do your golfing pals ask, “Hey, want to stop for a cold Chardonnay?” And yet, the connection between golf and wine seems to be growing constantly. Consider the ranks of professional golfers who have lent their names and, in some cases (no pun intended), their guidance to the production of world-class wines. Greg Norman. Frank Nobilo. Ernie Els. David Frost. One day, we might be talking about a Tiger Woods line of Sunday Reds (that pun is intended).

For now, those of us who like golf and wine in nearly equal measure can take comfort that a golf community named Viniterra has been able to survive the blight of awful timing, having opened its sales office to customers within days of the collapse of Lehman Brothers in 2008. That little bit of financial history wrecked havoc in terms of new residential developments. Yet Viniterra, thanks to the deep pockets resources of Boddie-Noell Enterprises, its owner and the operator of hundreds of stable fast food outlets in the south, has been climbing out of the hole that credit default swaps and easy money dug for all of us, but especially for new residential communities, and double so for golf communities. Boddie-Noell is also the force behind The Currituck Club, a successful beach and golf resort community at the north end of the Outer Banks. 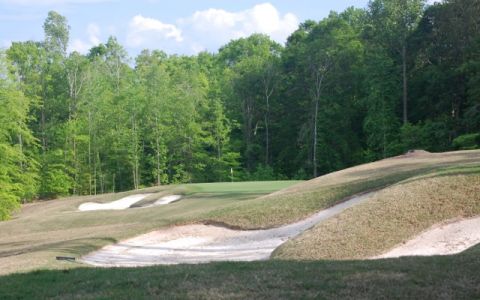 Bunkering on Rees Jones' Viniterra layout skew toward one side of some of the holes.  You do not want to be on the left side, for example, on the par 4 16th.

On the strength of its New Kent Winery and sleek Rees Jones designed golf course, as well as sharply priced home sites along its rolling terrain, Viniterra is doing quite nicely. For golf connoisseurs, the Jones

Want to learn more about current properties for sale at Viniterra?  Click here.
layout presents a significant challenge from whatever tee you choose; I chose the whites at just 6,124 yards (rating 70.2, slope 130) and found the routing a pleasure, if a couple of hundred yards shorter than I would have liked. The next longer tees, the Blues, play to 6,820 yards, with a rating of 73.1 and slope of 137. For the day that Viniterra attracts a state or even national pro tournament, tees at 7,725 yards with a rating of (gulp!) 77.2 and slope of 147 await. That’s getting up in Pine Valley territory.

Approaches to the large and swirling Jones green complexes are the key to scoring success at Viniterra; Jones layers a few bunkers on one side of most greens and protects the other sides with a bit of elevation or undulation. I am glad I did not play the longer routing; it would have been difficult to avoid trouble with my customary off-target long-iron approaches. Fairway turf still had some growing to do in late April, but the greens were mere weeks from peak, and they showed every sign of having the seeds of perfection. I look forward to a replay in the fall when cooler nights should compel the superintendent to cut the greens down, although they certainly were not slow on the day I played. 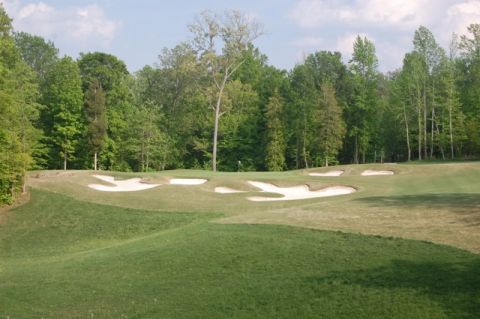 The short holes at Viniterra, such as the par 3 15th, have an extra dose of protection.

The golf course is semi-private for now; after the clubhouse is built –- they plan to start construction within the year –- and the membership roll increases, it could go private, although Viniterra officials will not commit one way or the other. On the beautiful day I played, I saw just a handful of other golfers.

From different vantage points on the golf course, you see some of the winery’s fields of vines, but the real visual treats are the occasional glimpses of the rustic winery that welcomes visitors and residents at Viniterra’s front entrance. Open for business since 2009 and already regaled as producing some of the best white wines in Virginia, the 12,000-square-foot New Kent Winery is abuzz with activity from serious wine connoisseurs and casual sippers alike. Environmentally sensitive visitors will be impressed to learn that almost the entire winery was built of reclaimed materials from historical buildings, including heart-of-pine trusses from a railroad depot (circa 1901), timbers for the floors and ceilings from a Connecticut warehouse (circa mid 19th Century), and bricks that date to well before the Civil War. The winery’s location, a short golf cart ride from the 18th green, could help lead a change in post-round drinking habits, at least in this part of the Commonwealth. I can’t wait to see what vintages the cart girls may be serving on my next visit. 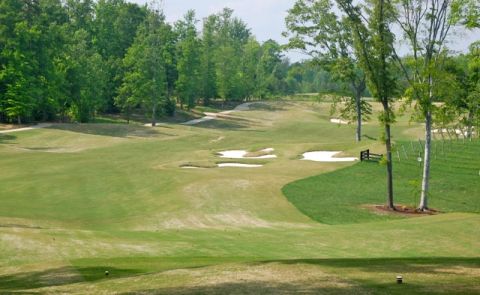 Jones' par 5s at Viniterra may not be long -- at least not from the white tees -- but one errant shot of three can lead to an easy bogey.

Located just off Interstate 64 and midway between Richmond and Williamsburg, Viniterra is positioned geographically between two interesting towns, both of great historical interest as well as modern flourishes. The community also seems positioned well in the market for golf course homes. Prices for one-acre and larger lots begin at $149,000 for wooded sites and reach their peak around $265,000 for panoramic views of the golf course. It seemed to me that as many homes were under construction during my visit as were already built, a proportion that is a better-than-good sign. One home that is nearing completion is called the Kensington Creek model, a 5-bedroom, 3-bath, 3,000+ square foot home on a wooded acre and is available at $599,500. A price of $200 per square foot –- land included –- is certainly worth raising a glass to.

I recently referred one of my customers to tour Viniterra with its sales director, Jimmy Forrest. My young customer, who will soon serve out his tour of duty as a U.S. Marine officer, is looking for a place for his family of four. After his visit, he wrote me, “I wanted to let you know how impressed I was with Viniterra. Beautiful facility with plenty of construction going.” He intends a revisit with his wife. Viniterra has signed on to list golf homes for sale at our companion web site, GolfHomesListed.com. Check them out, click through for more details, and plan a visit. If you go, the first one’s on me. 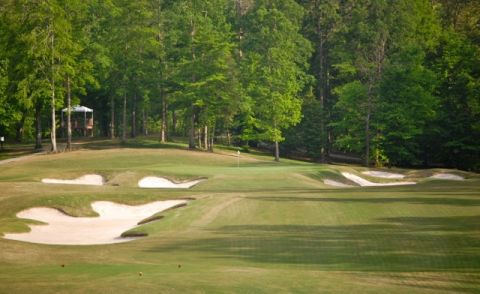 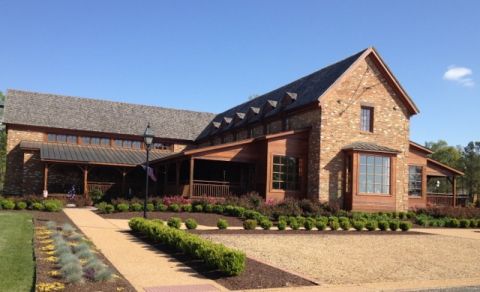 Anything but a well-placed approach shot at the trick 18th at Viniterra (top) could result in a terrible end to the round, but a finish at the rustic and comfortable New Kent Winery will take the edge off.

More in this category: « Rare new golf community opening in VA Justice for all at Wintergreen Resort »
back to top
Back to Top