Written by  Larry Gavrich
Rate this article
(0 votes)
Facing an obligation of $1.7 million to repay 100 members their deposits by the end of 2010, Dominion Club owners HHHunt decided to do the expedient thing -– they filed for Chapter 11 bankruptcy, which is designed to give an organization time to reorganize its operations.  Of course, the law can also provide an otherwise solvent larger organization a way to protect its broader assets.  Dominion’s members know this, and they have now brought a lawsuit against the Virginia developer for $11.6 million, according to an article in Richmond BizSense.  The amount of the lawsuit accommodates another $10 million in deposits that members say will come due in the next few years.  Individual deposits owed run to as much as $22,000.

From all appearances, Dominion’s owner should have a steady stream of cash flow from its ownership of the club.  Few 18-hole clubs can boast 800 dues-paying members, as can Dominion.  That should be enough of a base to provide a steady stream of income from the golf course (cart fees, lessons, pro shop merchandise) and the clubhouse’s dining rooms (not to mention dues 800 members).  Bankruptcy laws, which were designed to protect the assets of truly troubled operations while they reorganized themselves back to health, are often used by large, multi-division organizations to skirt their obligations.  This is what Dominion's members are claiming.  But in at least one other case we know, members themselves actually used the bankruptcy court to engineer the sale of their club. 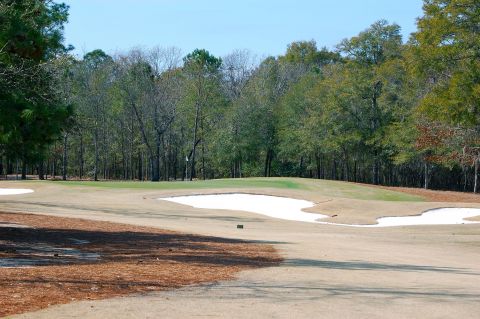 Former members at The Reserve at Litchfield Beach, SC, tried to hold up a sale of the club in an attempt to recoup their original membership deposits.  A bankruptcy court judge put the sale and survival of the club ahead of the former members' claims.

It happened at The Reserve Club of Litchfield Beach, SC, where a membership concerned about the financial viability of their private club agreed to sell it to multi-course operator McConnell Group for just $1 (and the promise of improvements to the golf course and clubhouse).  But when former members who were owed a return of their equity deposits balked and brought a class-action lawsuit to block the sale, The Reserve Club stopped paying its taxes and went into receivership.  A bankruptcy judge in Charleston decided that the survival of the golf club was the top priority, and he permitted the sale to McConnell to go through in exchange for the new owner’s payment of the back taxes, about $400,000.  Shortly thereafter, McConnell closed the course temporarily and replanted the greens and reshaped the bunkers, and everyone -– except the former members who are out as much as $33,000 each -– seems content.  I played the course recently and it was in splendid shape.

The Dominion case is different, although the overriding tactic may appear to be the same.  Besides the club’s apparent financial health, those owed the deposits are current members, not former ones.  And the Hunt group wants to retain ownership of the club once the court waives the owners' obligations to the members.  That seems a classic cake-and-eat-it-too scenario; in effect, the members would be funding Hunt's ongoing operation of the club by forfeiting their deposits.

Whereas survival of a golf club was at stake at The Reserve, in Richmond the claimants are charging that the club’s owner organization is simply trying to avoid its obligations, even though it can afford to pay.  On the face of it, it seems the members have a compelling case.  We will stay tuned to see if the local courts agree.

Footnote:  Many thanks to my three dedicated readers who all sent me the news article on Dominion Golf Club within an hour of each other.  I appreciate your thoughtfulness.

More in this category: « One reader sees malice aforethought in golf club intentions on membership deposits Dominion Club members raise their voices »
back to top
Back to Top