Pick and Choose: An á la carte approach to buying a golf home can save you money
Tuesday, August 10, 2010

Pick and Choose: An á la carte approach to buying a golf home can save you money

Written by  Larry Gavrich
Rate this article
(0 votes)
Shopping for a home to suit your golfing lifestyle is a little like eating in a fine Parisian restaurant.  You can choose the prix fixe meal, where the courses are served for a set (fixed) price, or you can order the more expensive á la carte meal.

In shopping for a golf community home, prix fixe is generally more expensive than á la carte, and it limits your choices.  Many developers sell you a patch of dirt and make you select one of their preferred builders for your house.   Club membership and a roster of other amenities are mandatory in some golf communities.  You pay for the amenities up front and through your club dues forever, whether you use anything more than

Some golf communities require mandatory club membership and the payment of dues, even before you build your home.
the golf course or not.  (I have yet to meet the dedicated golfer who also works out in the fitness center and swims regularly in the pool and plays tennis and…well, you get the picture.)  In those golf communities in which developers require golf membership with the purchase of a lot, a buyer who may not build a home on the property for, say, six years, must pay club dues for 72 months before actually using the golf course and other club facilities.  Although the new economic realities of golf community development have forced some developers to toss in the cost of the initiation fee with the sale of the property, the dues payments can still loom large. 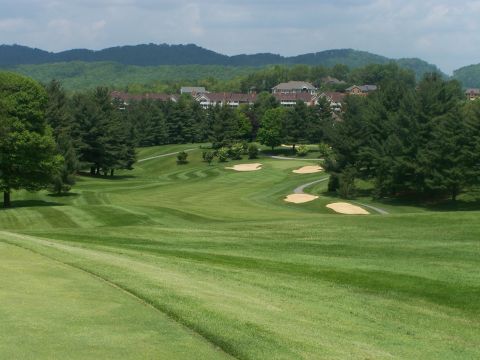 Mountains surround the gently rolling Fincastle Country Club golf course near Bluefield, WV.  Other photos of the course at bottom.

All photos courtesy of Fincastle CC.

Some adventurous couples seeking to stretch their dollars farther are opting for a more “hybrid” golfing lifestyle in which they buy “naked” property unadorned with fitness centers, clubhouses, or even a golf course.  They wait a few years to build their house and then join a private or semi-private golf club off property but nearby.  They wind up with a lifestyle not unlike the one they would have inside a planned golf community development, except without the upfront costs and the payment for amenities they might never use.

One western Virginia development could serve as an example of how this can work.  I am on the mailing list for Diamondback Development, a family-owned company that is selling large tracts of land on the far western edge of Virginia, but just 10 minutes from Interstate 77 and less than 15 minutes from the “cool” town of Bluefield, WV, whose motto is -– listen up, Florida residents -- "Nature's air conditioned city, where the summer spends the winter.”

Diamondback first developed Cove Creek, about 15 minutes from Bluefield, where they have sold well over half the 99 multi-acre mountain lots, one of them ranging up to 47 acres for $169,900.  Now Diamondback

With no amenities or brokers' fees, some properties are as low as $40K for a five-acre tract...with mountain views.
is introducing for sale beginning next week 13 properties at The Overlook, adjacent to Cove Creek, where a five-acre tract is currently listed for just $39,900 and larger properties for marginally more. (Some actual views from the properties are posted at The Overlook web site.)  Prices in Cove Creek and The Overlook are considerably lower than at most of the golf communities we describe here because Diamondback does not build any brokers’ fees into their prices and because they are not investing in any amenities beyond the standard infrastructure necessary for a residential community (roads, streetlights, drainage, etc.)

Diamondback’s VP of Development Jay Shott, who was raised in the Bluefield area, tells me that the company owes no money to any bank and that it is dissuading any speculators from purchasing lots.

“Everyone we have sold to intends to build and live here,” says Shott.

Sited at up to 3,700 feet of altitude, the lots in The Overlook feature 360-degree long-range views of the mountain and the town of Bluefield to the west.  Bluefield has about 30,000 residents, but the area surrounding it is home to more than 100,000, enough to attract quality medical and adequate retail services (a WalMart is six miles away).  But Bluefield’s key attraction is its mountain scenery and its climate, especially in the summer, when August high temperatures average 76 and the chamber of commerce gives away free lemonade on any days the thermometer passes 90 degrees.

Those looking for high-tech fitness centers and an on-site clubhouse oriented social life will not be looking in these parts for a home.  But golfers could find a home just 10 miles away at the private Fincastle Country Club, which opened in 1963 and offers some of the perks of a golf community club membership, including Olympic size pool and Har-tru tennis courts, two of them lighted for

The Fincastle course was designed by Dick Wilson whose name is on Doral's Blue Monster course.
nighttime play.  Fincastle’s golf course was designed by the underappreciated Dick Wilson, whose many credits include the Blue Monster at Doral Country Club and a couple of the Cog Hill courses near Chicago.  Initiation fees at Fincastle for couples and families who reside in the area are $1,250 with monthly dues of $375.  Non-resident memberships are substantially lower, and the club’s nominal-cost “social” memberships permit some pay-as-you-play golf.  The golf course plays to 6,600 yards from the tips with a rating of 72.7 and a slope of 134, certainly no pushover.  One online reviewer said of Fincastle’s course:  “Great and fun course to play.  Greens play fast and the course is usually in great condition. Beautiful mountain scenery.”  A few other 18- and 9-hole public courses are within a short drive as well.

Most of the properties at Cove Creek include streams that flow year round, and all have access to the trout streams that flow through the community.  The individual properties are studded with dogwood, holly, rhododendron and mountain laurel.  Jay Shott says most of the lots at Cove Creek and The Overlook are flat, even though they are on the mountain, making it easier (and cheaper) to build than in many other mountain communities.  A few homes are already up and occupied at Cove Creek; an executive from the Discovery Channel, a couple of NASA employees and the owner of the local Harley Davidson dealership have bought properties in Cove Creek.  A college professor who purchased a large tract on the top of the mountain plans to build a small observatory to extend his own view by a few light years.

Make no mistake, this area of western Virginia provides “four season” living, which is a gentle way of saying the golf season runs roughly from April to November and you can expect some snow in winter at these elevations.  But for two-sport couples, a ski area is just 35 minutes from Cove Creek and The Overlook.  For the rest, beautiful winter views from their homes on the mountain will be on their menus.

If you would like more information about Cove Creek and The Overlook or would like an introduction to Jay Shott at Diamondback Development, please contact me and I will be happy to make arrangements.

More in this category: « Richmond’s Federal Club sold on the cheap Fit for a King: Arnie’s stamp is firmly affixed to Fawn Lake golf community course »
back to top
Back to Top