A golf course slope rating measures the difficulty of a layout for the typical bogey golfer, one who shoots around 90 over 18 holes.  A course of average difficulty has a slope rating of 113; the highest possible slope rating is 155, at the famed Pine Valley in New Jersey.  Although not always the case, the longer a golf course, the more difficult for a bogey golfer who, almost by definition, either doesn’t hit the ball very far off the tee or does not hit it straight, thereby bringing lots of trouble into play.

Golf courses of less than 6,500 yards and slope ratings in the mid-130s are rare, and those brutes that seem fair and fun to play for the bogey golfer are rarer still.  I played one of those earlier this week at Bay Creek Resort and Club in Cape Charles, Virginia.

The slope rating from the white tees at the Nicklaus course at Bay Creek -- total length 6,456 yards -- is a whopping 138.  The raters took note, I am sure, of the winds coming in off the Chesapeake Bay combined with the smallish but undulating greens, the many in-play fairway bunkers and the possibility for nasty pin positions just over steep faced bunkers that guard the mostly elevated greens. 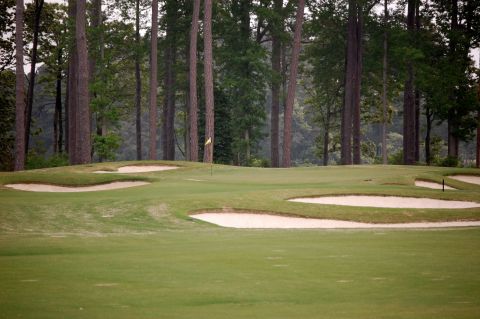 The approach to the 16th at Bay Creek Nicklaus.  While the front nine plays near and along the Chesapeake Bay, much of the back nine takes advantage of pine forests and adds a little touch of white here and there.

I played bogey golf, barely breaking 90, but at no time did I scratch my head because the course seemed unfair or unnecessarily difficult.  I scratched my head a lot, but it was always over decision-making.  This is a thinking man’s course that can best be summed up by consideration of one of its many interesting holes, the very short par 4 8th where, on the tee box, your hand is likely to bounce between driver and long iron before you finally make a selection.  I was playing by myself so, for kicks, I played two balls off the tee of the intriguing hole, just 291 yards into the wind from the white tees (6,456 yards total).  A lake protects the right side of the fairway almost to the green, and bunkers lay horizontally in the fairway about 225 yards from the tee.  The positioning of the water and bunkers gives the hole a left to right dogleg orientation.

I hit a good drive out along the water’s edge, mindful the wind was blowing pretty hard back toward the fairway.  The ball wound up on the far right side of the fairway, a mere 90 yards from the center of the green, the pin just beyond a greenside bunker.  I hit a three-iron from the tee to just inside the 150-yard pole but, from there, I had more or less a direct line at the pin.  Any designer who makes you think about the tradeoffs on the tee box –- risky driver to leave a short approach over a bunker or safe iron to leave a longer but more direct shot -– has accomplished one trademark of excellent golf course design -- appeal to the mental more than the physical aspects of the game.

Pick your poison:  At the short par 4 #8, your choice of shots from the tee will leave you with a short but tricky approach or a longer but more direct shot.

For the average bogey golfer, the most daunting feature of the Nicklaus course will be the wind coming off the bay.  On the front nine, the four holes along the bay play in four different directions providing three different experiences with the breezes –- into the teeth of it on the very short par 4th, hard right to left on the par 4 5th and back into it again on the par 4 6th.  As you move back inland, your drive on the long par 5 7th is straight downwind; I found the bunker on the far side of the fairway after hitting my best drive of the day.  On the back nine, it seemed the

For New Englanders and New Yorkers, Bay Creek is less than halfway to Myrtle Beach and worth a stop.
prevailing winds were sweeping across most of the fairways, rather than from behind or in front.  Whereas on most of the front nine hole, club selection was paramount, on the back nine picking your correct aiming line was more a factor.

I was not striking the ball very well and found six fairway bunkers, as well as four greenside bunkers.  Many of the greens at Bay Creek are elevated, and if you don’t carry above the false-front edge, you bounce right or left.  On most other 6,400-yard courses, my poor approach shots would have resulted in routine greenside chips, but at Bay Creek Nicklaus, they were bunker shots.

Oddly for a course with such windy conditions, I found the par 5s the easiest of the groupings.  The fairways were at their most generous on the three-shotters.  The par 3s showed great variety, from the 12th (185 yards into the wind and 238 from the tips) to the 131 yard 4th that plays toward the bay and directly into the wind.

Greens on the Nicklaus course had recovered nicely from aeration two weeks earlier and putted true if not fast.  In two weeks they should be outstanding.  I did not have a bad lie in the fairways or rough, although as the temperatures go up at night the balls that find the rough will begin to sit down.

Golf carts with GPS are on order at Bay Creek.   That will be a big plus as first-time players on both the Palmer and Nicklaus courses need all the guidance they can get (yardage books are not available because of

Carts with GPS are on the way at Bay Creek which will help the player with decision making.
the impending GPS).  Another slight nit:  Slightly raised stone curbs line most of the cart paths, and although they are beautiful to look at, they can give your back a jolt as you exit and enter the fairways at certain points.  Also, Bay Creek should be commended for not polluting the area 40 yards in front of the greens with “Carts This Way” signs; instead they use small dark green poles on each side of the fairway to show the exit area.  But the large barber-pole striped 150-yard stakes at dead center in the fairways pollute the beautiful, sweeping vistas.  Once the new GPS carts arrive, Bay Creek would do well to send the poles to the scrap heap.

The Arnold Palmer and Jack Nicklaus courses at Bay Creek are among the best on the east coast and worthy of being played at least twice each during a long golfing weekend or week.  The real estate is reasonably priced, the nearby town of Cape Charles is charming, and those with a yen for some extra action will find Norfolk just 30 minutes away.  Footnote for New Yorkers and New Englanders:  Bay Creek is about halfway to Myrtle Beach.  You could leave home early in the morning, take the ferry from Cape May, NJ, and get in a quick nine before the sun goes down on the western shore of the Chesapeake Bay.

If Bay Creek sounds like a place you might want to investigate, contact me and I will provide more information and help arrange a visit for you.

The 15th is just one of the interesting par 3s on the Nicklaus course.

More in this category: « Fragile golf economy claims another victim Virginia’s Bay Creek a Myrtle Beach alternative for northeasterners »
back to top
Back to Top