Weird and wonderful: Austin wrap up 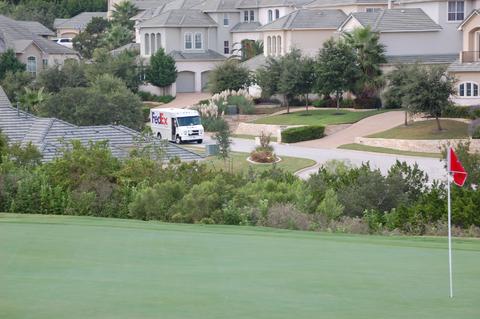 At River Place, fairways look either up at or down to the surrounding houses.


Here are some observations about Austin, Texas and its golf communities after my weeklong visit:
Topographically, the Texas Hill Country is reminiscent of San Francisco, with some of the hills looking more like small mountains.  Every golf course I played was surrounded by the hills, most with homes perched along the ridgelines.  House styles are mostly a meld of Southwestern and Mediterranean, but Tuscan is coming on strong in many of the communities.  Stucco appears to be the dominant housing material  Home prices, even for those with the nice views, tend to be 10% to 20% less than similarly situated homes in places like Asheville, NC (and Austin's summers tend to be 20 degrees hotter on average).  Fair warning:  Texas has no income tax and generates much of its revenue from property taxes, which are considerably higher than many other areas (count on an average of $15,000 in taxes for property valued at $500,000).  Yet Austin is still enough of a bargain in terms of real estate that retired Californians and Floridians are moving there in significant numbers.  I saw houses going up in every community I visited.
Like most university towns, this one home to the huge University of Texas, there is plenty to do in Austin; as I was leaving town, the annual music festival, Austin City Limits, was starting, with Bob Dylan and other more modern acts featured on numerous stages around town for 12 hours a day the entire weekend.  The comparison to San Francisco goes beyond similarities in topography; the rallying cry in town is "Keep Austin Weird," a slap at the pretensions of the newly wealthy citizens in the high tech industry.  Dell Computer, for example, is headquartered in Round Rock, just north of town; there is concern that some of the city's notorious funkiness may be at risk.  In recent years, two new magazines devoted to the cocktail party and black tie set have been introduced.  They won't be wearing black tie at the area's many barbecue joints where the smoked brisket reigns supreme.
The five courses I played were good to outstanding.  Falconhead is one of only three "signature" courses in the nation designed by PGA Tour hired architects, something that probably seemed like a good idea at the time.  Falconhead was for the most part a pleasant routing well out in the country; a family of deer watched me play one hole.  The course layout had some flourishes I found excess baggage, such as rectangular sand 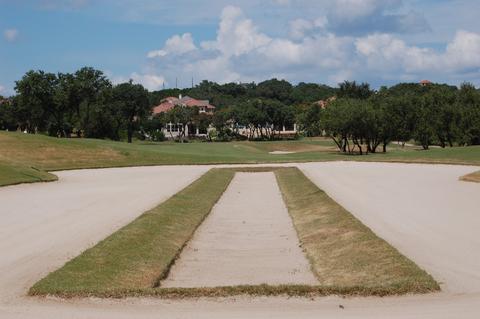 bunkers plopped down in the middle of other bunkers, but I generally liked the way the fairways bent around mesquite trees.  Falconhead, which is negotiating with the PGA Tour to sever connections so it can control its own destiny, is going to have to find a way to invest more money in their facilities.  For a daily fee course, lockers are not a necessity, but clean bathrooms are.  That said, the folks in the pro shop and snack bar were among the friendliest I have ever met in a clubhouse.
Avery Ranch, another daily fee course, was a beehive of activity, with numerous homes under construction around the course.  After awhile, the sound of hammering was as natural as bird chirping.  Although the heavy rains of the night before had left casual water in the bunkers, the fairways and greens had drained well.  Tee placement was especially important on the front nine, with mesquite trees at the edges of fairways to block approach shots to the well-protected greens.  Avery is a course where length is not as important as accuracy. I found the heavy iron fences behind virtually all the houses on the course unnecessary; the homes weren't close to the field of play.
The University of Texas Golf Club in the huge (6,500-acre) Steiner Ranch community was a terrific surprise for me, the first Bechtol Russell designed course I've played.  The elevation changes seemed entirely natural and forced a few changes of clubs in the fairway to ensure appraoch shots did not roll back down hills in front of the green.  Virtually all the par 4s and 5s are doglegs of some stripe or the other, making it important to

"shape" your shots if you want to shorten the approaches to the greens.  Conditions were superb, as was the professionalism of all staff I met.  The club's Golf Academy has all the latest high-tech software, including two cameras that check your putting stroke. I was impressed by the three "indoor" hitting bays with large doors that opened out onto the driving range. Members and the UT golf teams are pampered at the UT Golf Club.
River Place was odyssey golf, which is to say occasionally weird and occasionally wonderful.  For a first timer, the course was quite difficult, posing too many blind tee shots and blind approaches.  One par 5 was horribly designed, with a big hill running down from lay-up range to a pond in front of the green.  People I met in the days before sniffed about the River Place layout, but despite the par 5 and a few balls I lost "in plain sight," I would like to give River Place another shot someday.  It was in superb condition, the hills around the course were the most dramatic of the week and, unlike at the other communities, the vistas were not burdened by high-tension wires.  The surrounding community, with most houses perched on ridgelines, was also the most attractive of the week.
At The Hills Country Club at Lakeway, about 35 minutes from Austin, you can belong to two private courses, two daily fee courses or to all four of them.  I played the private Hills course, an early Jack Nicklaus design (1981) that shows the Bear's raw talents.  The trees in the fairway and his bias toward high left to right shots is in evidence at the Hills, but Nicklaus showed considerable overall restraint in embedding the course in the gently rolling hills near Lake Travis.  The routing was easier on the eyes than it was on my golf clubs, but it was not as relentlessly tough on mid handicappers as some Nicklaus courses of the ‘80s tend to be.  The Hills hosts the annual FedEx/Kinko's event on the Champions Tour, and it was almost in tournament shape in September, beautifully landscaped with greens that, although top-dressed with sand and aerated a week earlier, were near flawless.
None of the golf carts I used during the week had protective covers for your golf clubs, even those at the private, higher end country clubs.  I know it rains in Austin but maybe never on a golf course.  And for a large state that is known to do everything big, I will never get used to the size of the housing lots in Texas cities.  Even 3,000+ square foot houses are within just 20 feet of their neighbors' houses.  One acre lots and higher are few and far between.  Those used to lots of space might feel claustrophic in an Austin golf community.          One last note:  In six days, I saw two cowboy hats, one in a coffee shop and one at the airport as I was leaving town.  How weird is that?
I'll report at greater length on the golf and the real estate in the Austin area in an upcoming issue of HomeOnTheCourse. 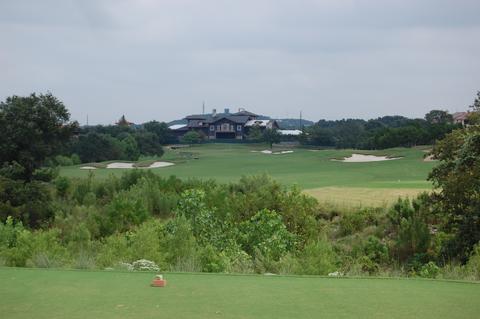 The 18th at University of Texas Golf Club is backed by the soon to open $16 million clubhouse.

More in this category: « Austin defies gravity of housing trends Through the green -– and blood red -– golfer plays on »
back to top
Back to Top