The Hills Are Alive...With Floridians

I finally made a long anticipated stop at Fairfield Glade, the sprawling multi-course golf community on the Cumberland Plateau, midway between Nashville and Knoxville, TN. I'll have more to say about the community in the coming days. During our round at The Glade's Stonehenge golf course, my wife and I were matched up with another couple. Dave and Judy live in Clearwater, FL, but now spend their summers at Fairfield Glade, as of about two weeks ago. Their newly purchased home faces the Stonehenge golf course, but the round they played with me was their first on the Stonehenge layout (they have played the four other other courses).
Of course, I asked why they had chosen this particular community in which to spend a quarter of their year.
"The temperatures and the home prices," Dave replied without hesitation, as if he had explained this to friends and family a hundred times before. He and Judy elaborated that they had had it with the heat in Florida from June through the end of the summer and were looking for a reasonable place to enjoy their retirement summers. Although they had checked out a number of mountain communities in the southeast, there was always something just a little off with the others. For example, one nice northern Georgia community high in the mountains had roads that twisted so much that even the simplest grocery run, they said, would have been a long and arduous journey. Then they found Fairfield Glade, located on the Cumberland Plateau, a flattish region in Tennessee between Nashville and Knoxville that reaches 2,000 feet in elevation and averages 10 degrees cooler than either of the two aforementioned cities (and up to 20 degrees cooler than the hottest days in Clearwater).
Home prices in Fairfield Glade begin in the $100s for condos, and many single-family residences price out at less than $100 per square foot. (More on this in the coming days.) I asked the couple why they hadn't chosen Asheville as a potential area for their home.
"Too expensive," they said almost in unison. 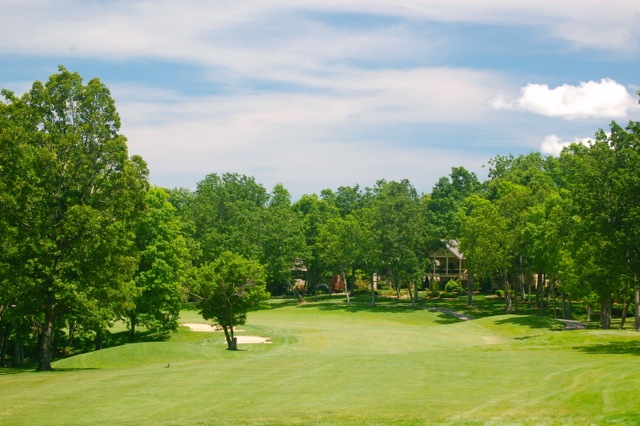 The Stonehenge course is one of five inside the sprawling community of Fairfield Glade, near Crossville, TN.

On our two-hour drive from Fairfield Glade to Asheville, we encountered a surprisingly large number of cars with Florida license plates. Dave and Judy aren't the only residents of the Sunshine State looking for a little summer respite at higher elevations. North Carolina and the upstate regions of South Carolina are attractive lures for those seeking cooler summers. And should a couple from Florida feel the need for a beach in summer, both Carolinas have those in spades, just a few hours from the mountains in both states.  On the other hand, Tennessee has no state income tax and treats military and other pensions as well as most states do.  There are some cool reasons to consider all three states as retirement venues.

More in this category: « River Islands Golf Club, Kodak, TN: The French Broad runs through it Fairfield Glade: Cool Living on the Cumberland Plateau »
back to top
Back to Top