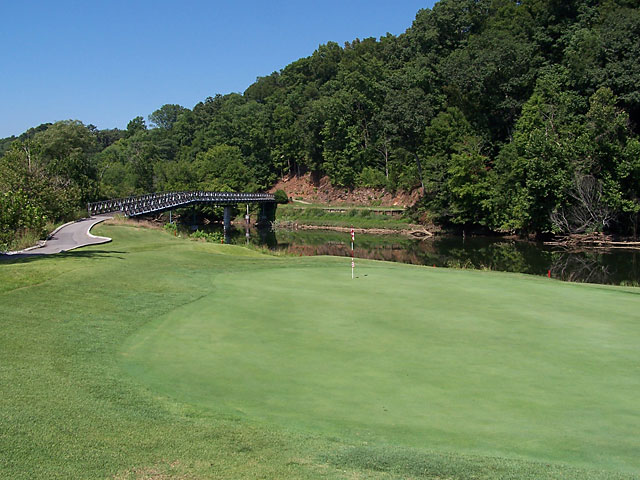 Some holes at River Islands play to an island in the French Broad River.

[Note to readers;  If this review seems familiar, we first posted it at OffTheBeatenCartPath.com some time ago.  We wanted to make sure you saw it.]
A golf course in a town named Kodak should be picturesque, and River Islands Golf Club doesn’t disappoint.  The “River” is the French Broad, and aside from providing some excellent shot making opportunities and dramatic water views, it must be the source of some pretty bad puns.  No, the river isn’t named for Marie Antoinette or Brigitte Bardot (see, I warned you); actually, the term “Broad” in Colonial times was synonymous with “River,” and a French settlement sat astride the river upstream in North Carolina.
Thanks to the river, the River Islands course forces a few long carries and enough shaped shots to justify its rating of 72 and slope of 129 from the regular tees (6,300 yards), which I played.  At its lengthiest, the course plays 7,000 yards with a robust rating of 75.4 and slope of 133.  Designed by the underrated Arthur Hills, the course opened in 1991 and was acquired by LinksCorp in 1998 (LinksCorp owns a few dozen public courses in the southeast).
River Islands is just four miles off Interstate 75 and less than a half hour from Knoxville to the southwest and the resort area of Gatlinburg/Pigeon Forge to the northeast, home to Dollywood, scores of outlet stores and mind-numbing traffic during the summer high season.  River Islands doesn’t quite qualify as remote, but the roads from the interstate make it feel that way as they wind through largely undeveloped countryside.  And despite its status as one of the best public courses in the state, “The Islands,” as locals refer to the course, was lightly trafficked on the Monday in mid-July that I played it; the first tee was wide open at 9 a.m., and I saw only a few other golfers during my round.  Greens fees, cart included, were a bargain at $56 (they are $60 on the weekend).
Just a few houses abut the perimeter of the layout, unusual for a course of fairly recent vintage.  However, a community of 200 houses is planned for just beyond the course’s entrance and along the river; River Islands’ owners, who are not affiliated with the developers of the community, are hoping more neighbors will pump up membership numbers for the course (although there are no plans to go private).  Currently, River Islands charges no membership initiation fee, and dues are just $1,300 annually.  If you can figure out a way to play just three rounds a month, you’ll more than make up for the dues. 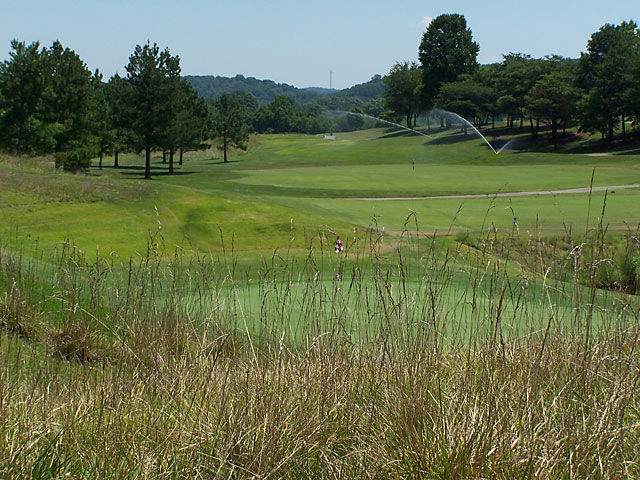 Arthur Hills has a large portfolio of excellent designs, and in this correspondent’s opinion he should be mentioned in the same breath as the most celebrated architects of the last three decades.  He treats the land with more respect than do Dye, Nicklaus and Palmer, designers who can’t resist stamping their own insignias on the terrain (think Dye’s railroad ties, Nicklaus’ trees in fairways and Palmer’s obscenely large traps).  Hills’ designs are more classic and links style, echoing the great designers of the early half of the 20th Century.  Like Donald Ross, Hills won’t ruin your day if you are a little awry off the tee box, but if your short game is absent, you will be muttering for days.
The starting hole at River Islands is a great example of the Hills (and Ross) style of design.  At 356 yards (386 from the tips), it is a pleasant starter.  From the tee box, the routing is evident even without the excellent yardage card River Islands provides.  With fairway traps on the left and a greenside trap at front right, the strategy is clear, especially with a front-left pin position:  Aim for the right center of the fairway on the drive, and hit to mid-green on the second, providing a reasonable birdie opportunity no matter where the pin is positioned.  Of course, I short-sided it on the left and had an impossible chip to a pin that was at the bottom of a slope, turning an easy par opportunity into a bogey.
The French Broad comes into play in dramatic fashion on #3, a 175 yard par 3 that is all carry over the water to a green on one of the two islands in the river (in all, five of the holes play to, from or on these islands).  The green is about 100 feet deep, but if the pin is near the front and you hit to the rear, you will have a queasy feeling putting straight downhill toward the river.  We noted that a putt parallel with the river did not break a bit.  On #4, a slight dogleg right par 5, the river comes into play along the entire left side, making it a tough drive for a right to left hitter, especially with trees guarding the entire right side (Note to those who draw the ball:  The river is always on the left when it is in play).  Traps and swales guard the left and right of the green, and the river looms left and back of the green.  Next, you hop from one island to the next on #5, another par three that, because of the carry over the river, looks a lot like #3, although it is a few yards shorter.  If you got dunked on #3, this gives you another chance to quickly get back on the horse.  A left pin position on the par 5 6th, which is reminiscent of # 4, brings the river back in play on the approach.  The rest of the front nine avoids the river and features well-trapped greens, another excellent par 3 (the all-carry 8th at 190 yards), and a blind tee shot on the par 5 #9, which does not return to the clubhouse (snack shack provided).
The back nine was as much fun as the front, with #s 15 and 16 played on the islands in the river.  The highlight was the short par 4 11th, just 342 yards and a modest dogleg right.  Its green sat below fairway level, entirely fronted by mounding which gave a view only of the very top of the flagstick.  A small lake lapping up against the green on the left was in view.  With a front pin position, this provides a short but scary approach with a mere gap wedge or less.  The hole reminded me of short par 4s on two great golf courses I’ve been fortunate to play –- Fisher’s Island and Kapalua Plantation – where you fly entirely blind from fairway to green and have little clue as to how far you are from the pin until you get to the green.  Thankfully, after punching out from the trees to the base of the mound in front of the green, my slightly pulled lob wedge stopped just short of the water, a mere 10 feet from the front pin position (I missed the putt).
Other notes I made about the back nine at River Islands that shows the diversity of the Hills design:  The greens were tough to read, and I saw a break a few times where there was none; a well-placed drive gets an extra 40 yards of roll on the par # 13th; on the par 5 14th, your second shot is more than likely going to come off a downhill lie; #15 is another great par 3 on one of the islands, its long, deep green actually a peninsula in the river; the par 5 16th is reachable, but you’ll make bogey at least if you hook your second (that pesky French Broad again, always lurking stage left); the 17th, the final par 3, is short (142 yards) and waterless, but the big bunker in front and series of three bunkers in rear mean hit the green or else; the finisher (400 yards) is a tight driving hole with fairway bunkers on the right from 160 to 230 yards and a modest approach shot to a narrow but deep green with the river very much in play on the left, and only one little trap to save you from the French Broad.
The staff at River Islands was friendly and helpful, but the clubhouse is nothing to write home about (or to stop for a drink in).  It is small, basically all pro shop with an adjoining snack area.  No matter; a few hours later when I had my post-round quaff, vivid memories remained of a wonderful Arthur Hills layout, challenging but not exhausting, and a round played along a river that demands good shots and generates bad puns.
For more information, including on-line tee time reservations and a representative group of photos (somewhat underexposed), go to www.riverislandsgolf.com.

More in this category: « Golf Course Review: Fox Den Country Club, Farragut, Tennessee The Hills Are Alive...With Floridians »
back to top
Back to Top