Fazio vs. Fazio: And the winner is... 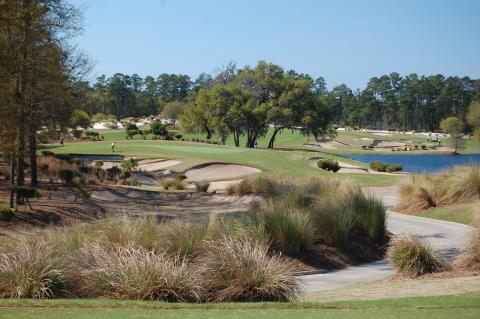 Fazio's design for the par 3 4th at Belfair (above) is a delight for the eyes and the tough-minded ball striker.  The designer's best par 3 at the Berkeley Hall South course (below), #16, is more inspired than most of the rest of the layout. 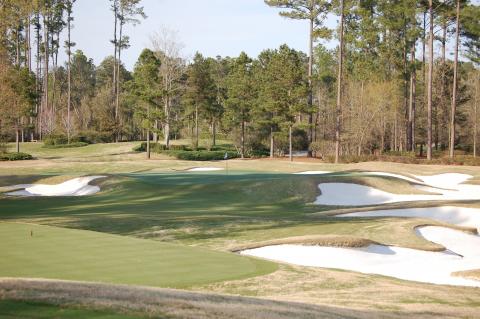 Golf architects are a bit like many great artists of the past; they depend on commissions from developers for their livelihoods.  But with design fees come compromises because, after all, the point of the golf course is not simply to provide residents with an amenity; it is to help the developer sell dirt.  Sometimes you can play a planned community golf course and just feel the stifling influence of the developer -- lots of out of bounds stakes between backyards and the course, condos or villas lining the fairways, a few decent views but none of the nearby ocean, marsh or mountains (the home sites get those).  But during some rounds, you know the architect was given wide berth because the course makes few, if any, compromises.
This all came to mind last week when I played two Tom Fazio courses in

upscale Bluffton, SC, communities -- one in Berkeley Hall and one in Belfair (each community features two 18-hole Fazio courses).  The East course at Belfair was challenging, appealing to the eye and straight out of the best of the Fazio oeuvre; comparatively speaking, the Berkeley Hall South course I played the previous day was a rather tame affair with some excellent holes and some utterly undistinguished ones, as if Fazio and his design team were tuckered out from the effort of it all.  The Berkeley Hall South course was especially disappointing in view of the marketing of its "core golf" layouts, meaning houses are kept at a distance.  Generally speaking that was true, but if the designer was indeed given an unusual amount of freedom, he doesn't always use it to advantage on the South course.
I didn't know this before I played at Berkeley and Belfair, but the South Carolina Golf Ratings panel listed both Colleton River and both Belfair courses in its top 50.  A Pete Dye course nearby, at Hampton Hall, also made the list. I have played Hampton Hall and found it unremarkable; that neither of Berkeley Hall's two courses are on the list validated my own impressions.  The sad fact of its courses' mediocrity leaves the upscale Berkeley Hall to brag on its web site about its men's locker rooms being named one of the top 50 in golf.
The par 3s on the Berkeley Hall and Belfair layouts are a window into their overall differences.  The first one-shotter at Berkeley plays 183 from the next to

the back tees.  The long, meandering bunker that runs the entire length of the hole down the left only comes into play at greenside, and then only for those who overcook their long irons.  At 180 yards, the first par 3 at Belfair, #2, is all carry, first over water and then over a high-lipped bunker snuggled up against the entire front right side of the green.  Whereas at Berkeley it is easy and tempting to bail out to the right, at Belfair the bailout takes almost as much skill as landing on the green.
The fifth at Berkeley is a modest 151 yards with water tee to green and guarding the left side...sort of.  It cuts in 25 yards short of the green and then moves away to the left, leaving a small (for Fazio) bunker at left the only real protection for the green.  Again, there is plenty of easy bailout on the right, leaving a routine chip to the pin.  At Belfair, #4 is both a work of art and a major challenge at 201 yards over sawgrass and sand to an elevated green whose right side is protected by a lake.  You would have to push your ball a bit to reach the water, but seeing it from the tee combined with the bunker that almost surrounds the green on the right makes you think twice about club selection.
The 11th at Berkeley has a little length to it, at 209 yards, but that is about all to recommend it, a straight-on affair to a redan (angled) green protected only by a small bunker at the right.  Contrast that with Belfair's #9 at just 170 yards, but with an all carry shot to any pin placed right of center over yawning bunkers.  Hit just short of the green and your ball will bound down to the left, leaving a tricky pitch shot across an undulating green.
Berkeley Hall's final par 3, #16, does add some visual and shot making

complexity to the round with a wave of bunkers from tee to green down the right side and one good-sized, strategically placed bunker in the notch at the left side of the green.  This is the Fazio I love, and I wonder where he was hiding on the earlier par 3s.  His two final par 3s at Belfair, however -- the course is a par 71 -- are just as good as Berkeley's 16th, the 14th at 154 yards to a severely sloping surface framed by the marsh, and the 17th coming directly back from the marsh, with sand from tee to the left side of the green and a nasty pot bunker directly in front.  At just 137 yards, it's short but tricky, especially when the wind kicks up off the marsh.
The par 4s and 5s at both courses follow essentially the same comparisons, the Berkeley holes showing a little spunk here and there but, for the most part, nothing memorable.  Once you play Belfair, its imaginative and visually pleasing routing will make you forget the holes at Berkeley Hall.
I should note that, at Berkeley Hall, I was compelled to bring along a forecaddie since I was an unaccompanied guest.  Trey Long provided good company (he laughed indulgently at my jokes) and guidance on reading a few tricky putts.  He and I had a good chuckle when one of the Berkeley Hall members picked up my ball and pocketed it after I pulled one into the brush.  If you can afford the real estate prices at Berkeley Hall, you should leave the golf balls where they are.

At Belfair, a forecaddie was not required, but about halfway through the round, I met up with members Jim, his wife Connie and their friend.  In the spirit of full disclosure, I should say that Jim is not a fan of Belfair's East course.  "Fazio never gives you an even lie in the fairways," he told me, "and I hate that."
Horses for courses; he might just like the South course at Berkeley Hall better than I did. 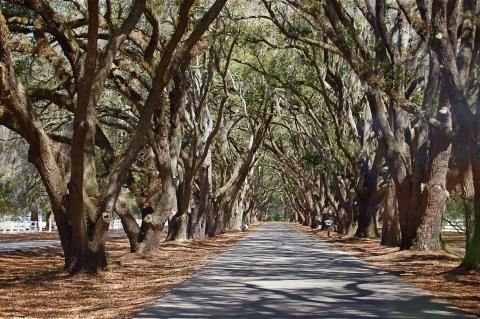 Stately matter:  Like soldiers at a military wedding crossing their swords above the lucky couple, the live oaks along the entrance to Belfair make for a grand welcome to all.

Although Berkeley Hall and Belfair are considered high-end golf communities in the area, prices are at their lowest in the last half dozen years or more and the inventory of homes on the market is substantial.  Once the market hits bottom -- some predict six months, some a year -- prices in these prime areas will rise faster than in other parts of the country, based on simple demographics (i.e. all those baby boomers beginning again the migration south).  If you would like more information, or would like to arrange a visit to any communities in the southern U.S., click here or on the Contact Us tab at the top of the page, and I will get back to you swiftly. There is never an obligation or fee for my services.
Read 6807 times Last modified on Friday, 27 September 2013 11:29

More in this category: « Economy, lack of marketing hangs albatross around Daufuskie Island Resort Colleton River and Moss Creek anchor top and middle tiers of Bluffton, SC, golf communities »
back to top
Back to Top