The Terror of Tiny Greens

Many of us will look on with awe tomorrow (Sunday) during the final round of The Players Championship at TPC Sawgrass when players in competition for victory face the daunting 17th hole with its tiny island green. That green is on my bucket play list, but I have played a par 3 surrounded by marshland maybe 100 times that is every bit as intimidating.
Although from all appearances, the 13th green at Pawleys Plantation Country Club is smaller than the 17th green at Sawgrass, published measurements indicate it is a couple hundred square feet larger.  But I can't imagine the Sawgrass hole is any more intimidating than Pawleys short par 3.  Jack Nicklaus took care of that in 1988 when he used the old rice plantation dike as the site of the four tee boxes on the hole. (The dike also serves as the tee locations for the longer and hardly less intimidating tee shot to the par 3 17th hole.)  At only ½ mile to Pawleys Island Beach and the Atlantic Ocean, the tee-to-green shot over an expanse of marshland is fully exposed to the elements. Rare is the day when the wind is not blowing one way or the other and, oddly enough, the only “good” wind on the hole is straight in your face because the extra lift of a decent shot will pretty much ensure your ball does not bounce over the typically firm green.  The toughest wind is the one that blows out across the marsh to the island and ocean beyond. 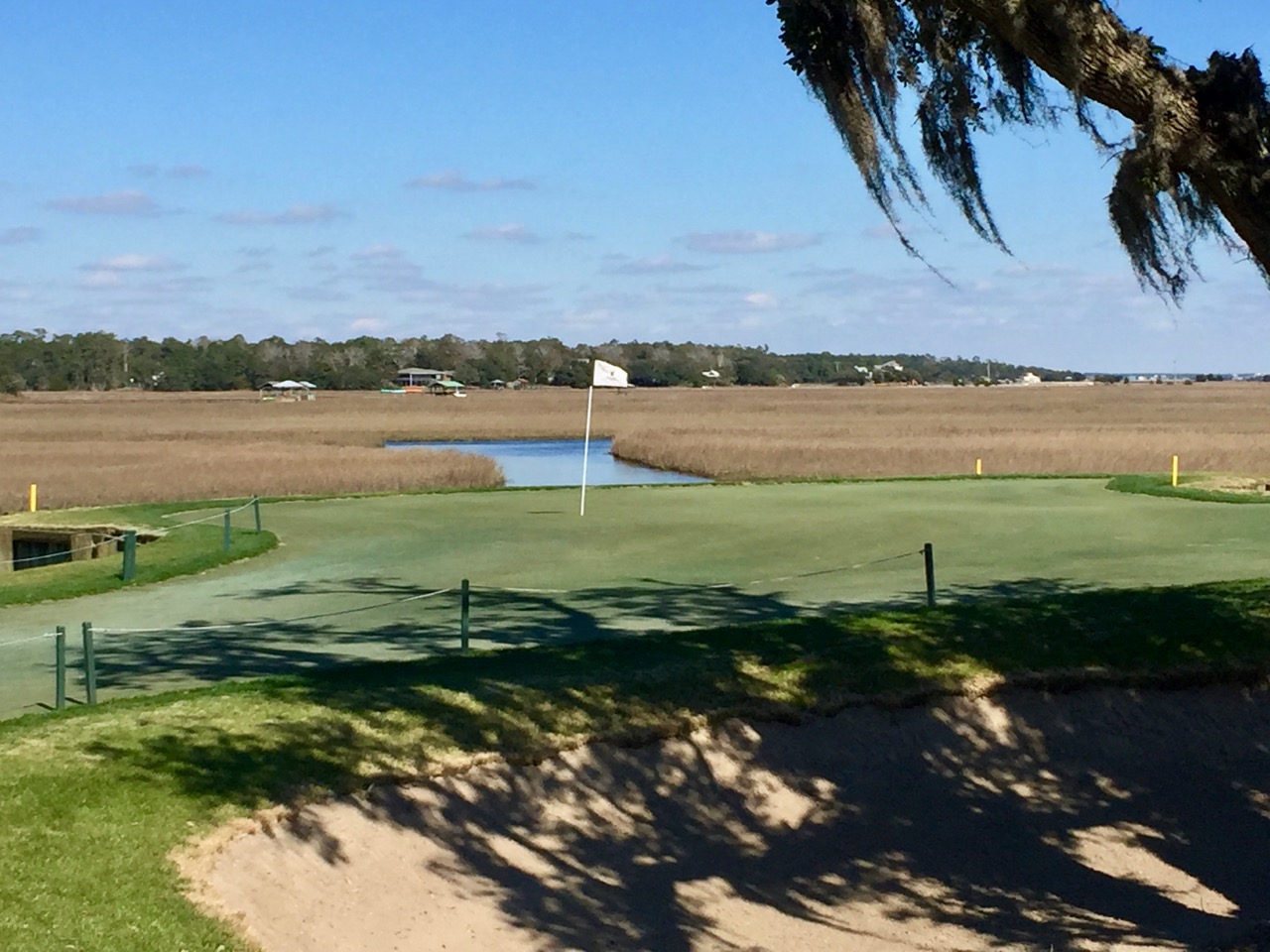 The 13th green at Pawleys Plantation. Tee boxes are off to the left and, on the day of this photo, the wind was blowing from tee to green, making a difficult shot almost impossible to hold on the tiny green.
That said, a shot to the back of the green under such conditions leaves a strongly downhill putt with the wind blowing back toward a middle or front hole location, running the risk of putting the ball through a thin strip of collar and into the marsh short of the green. Whereas the entrance and exit to the 17th green at Sawgrass is from the back left, at Pawleys the route is from the right, providing a dubious bailout that is no more accessible than the thin runway at Sawgrass.
I am sure those who have played #17 at Sawgrass have their pet names for the hole, some not so genteel. At Pawleys Plantation, members like myself have a stock response for first-time visitors who stand on the 13th tee box, mouth agape at the shot before them.
“Yup,” we say, “the shortest par 5 you will ever play.”

More in this category: « Middle Earth a Bad Place on Nicklaus Course Extra Extra Free: Discovery Package Adds Day of Lodging, Golf »
back to top
Back to Top