Nicklaus lays it out for Pawleys Plantation members
Thursday, October 25, 2018

Nicklaus lays it out for Pawleys Plantation members

Jack Nicklaus, the Golden Bear, spent the afternoon and early evening this past Monday at Pawleys Plantation Golf Club, one of his signature designs of the late 1980s, about the time his golf architecture business began to take off. He has been one of the world’s most successful course designers since.
Mr. Nicklaus, as most referred to him during the day, had lunch with the golf club’s owners, Founders International Inc, drove the course he hasn’t seen for 30 years and then spent more than an hour with about 40 children enrolled in the Myrtle Beach area’s First Tee program. Their parents made up a sizable and enthusiastic audience. 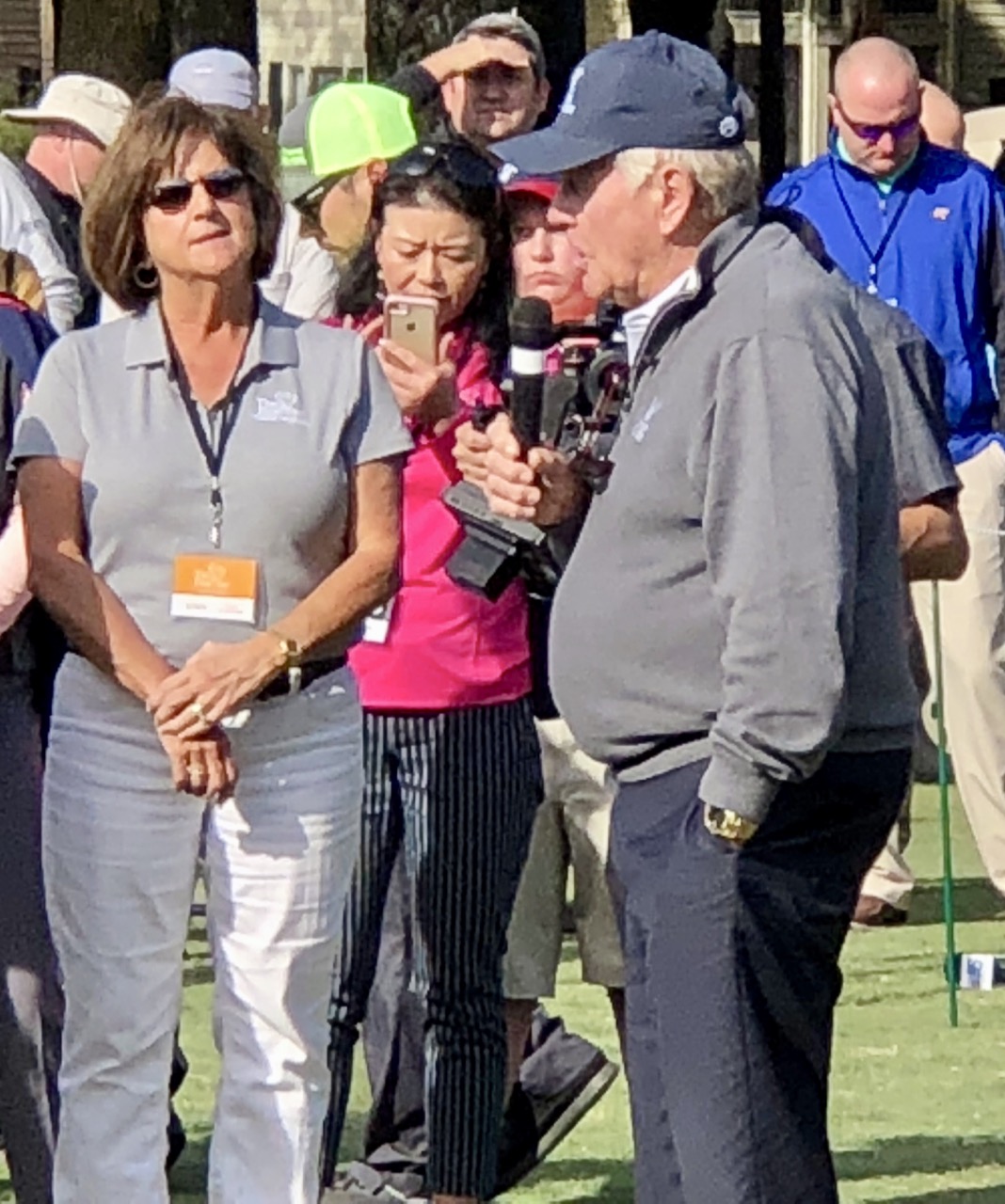 Jack Nicklaus spoke with a crowd of onlookers at Pawleys Plantation before he worked with children from the local chapter of First Tee.
The visit was in celebration of our club’s 30th anniversary. One of the most popular golfing destinations on the Grand Strand of Myrtle Beach since its opening in 1988, Pawleys Plantation’s layout has stood the test of time in terms of entertainment and challenge. Early Nicklaus designs like Pawleys put a premium on forced carries over wide expanses of sand and water or, in our club’s case, marshland. The signature par 3 13th, virtually surrounded by marsh with a green smaller than the famous island green at TPC Sawgrass, is the most iconic of the hundreds of holes in the Myrtle Beach area. My fellow members like to refer to it as “the shortest par 5 in Myrtle Beach.” From the regular tees, it plays about 120 yards.
As good and challenging as Pawleys Plantation is, Father Time and Mother Nature have had their way with the course. Greens, which were designed medium small originally by Nicklaus, are now officially “small” after years of aggressive mowing. This is not unusual for golf courses of a certain age. The effect is to pull the greenside bunkers away from the edges of the greens, sometimes by a couple of yards or more. From the fairway, it can appear to a first-time visitor that the Bermuda fringe and rough is actually the green. The illusion forces improperly under-clubbed shots from the fairway. When the course was first opened and in succeeding years, a shot over the bunker would have led to a putt, not a chip.
At a fund-raising dinner at Pawleys Plantation the night of Nicklaus’ visit, he was asked his reaction to his layout 30 years after completion. He validated criticism of the reduced size of the greens, encouraging that the bunkers be pulled closer to the putting surfaces. He also said, rather emphatically, “Get rid of a lot of the sand out there.” Some holes he designed include waste bunkers that are almost 200 yards long and, unlike the greens, they certainly haven’t gotten any smaller. Back in the day, they served as framing for some of the longer holes, but they have always been especially penal for higher handicap players. Pawleys Plantation attracts many buddy golf trips, and it is often painful – and slow -- to play behind such high handicappers, especially after they ignore warnings posted at the 1st and 10th tee boxes about which tees are appropriate for which handicaps.
Nicklaus’ most amusing critique of the course he built was also the most surprising. If he had a specific signature when he first started laying out golf courses, it was to leave small trees in the middle of fairways as directional markers, more than obstructions. At Pawleys Plantation, such trees are in play at the par 4 5th hole, the par 4 9th fairway and the par 5 14th – and they certainly have become larger. Of the tree on #14, Nicklaus said, “Take it down. It shouldn’t be there.”
At age 78, the man who always obsessed about his golf swing has the same mania to improve his course designs. Here’s hoping my golf club’s owners take him up on his offer to bring a very good golf course back to its original outstanding status. 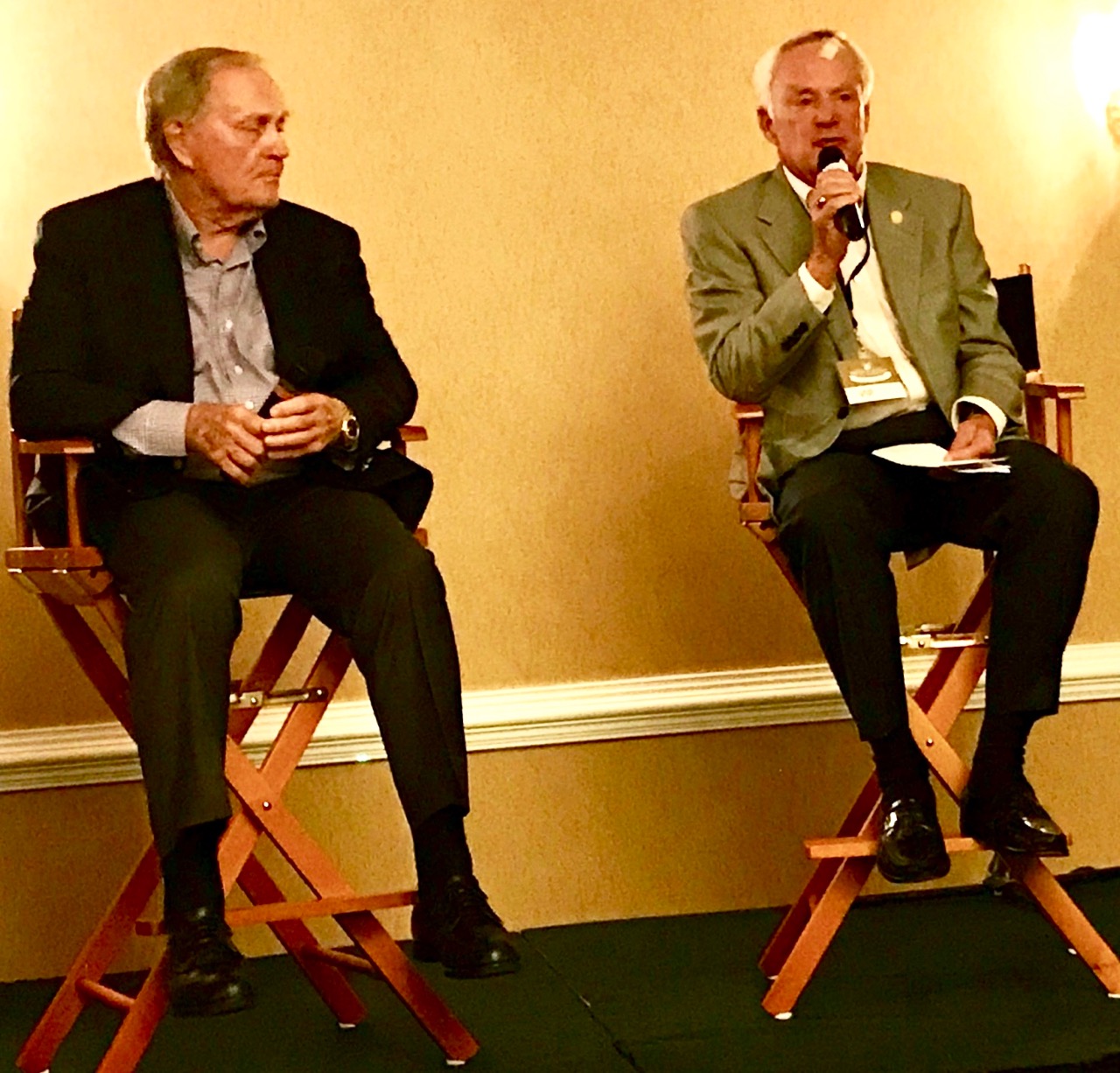 Jack Nicklaus (left) and Gary Schaal, former PGA Presidenbt and tour player, took questions from an enthusiastic audience at Pawleys Plantation. Nicklaus recommended the club's owners consider eliminating much of the sand in the course's huge waste bunkers, pulling green side bunkers closer to the putting surfaces, and taking down a tree in the middle of one fairway, a signature feature of the Golden Bear's early designs.

More in this category: « Caledonia Beats Mother Nature...and Me Less Is More at Pawleys Plantation »
back to top
Back to Top