The turf on Pawleys Island, SC, golf courses took a beating this winter. Bermuda grass and its variants do not like to sit for more than a few hours under a sheet of ice, but that is precisely what happened during one of the harshest winter seasons in memory. As of the beginning of July, most of the area’s courses were not yet back to normal and, indeed, a few greens looked more suitable for a lunar landing than for putting, with patches of new sod that, unfortunately, had not survived a recent drought. Although the grass on the greens at my own course, Pawleys Plantation, had grown back in, the course superintendent was clearly nervous about the dry days and hot nights. They were as slow in July as at any time in the last 10 years.
As usual, the management at the Mike Strantz-designed Caledonia Golf & Fish Club and, to a similar degree its companion course across the road, True Blue, recovered more quickly thanks to the loving care of its turf managers and a general management willing to spend what it has to in order to justify its green fees which skew toward the higher end of the nearly 100 courses on the Grand Strand of Myrtle Beach.  (You get what you pay for...) 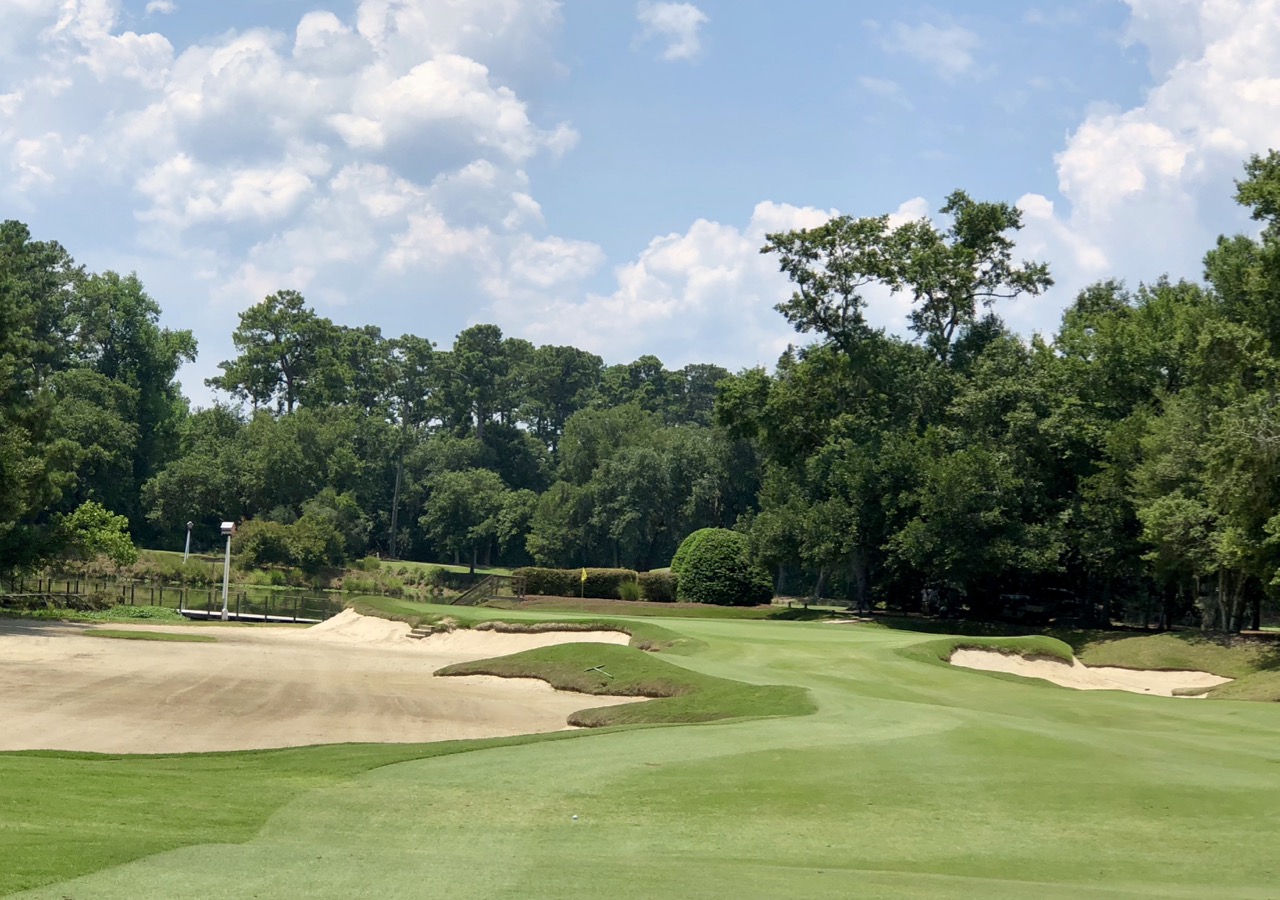 Caledonia Golf & Fish Club justifies its green fees with great attention to condition, no matter how rough the weather.
I played Caledonia twice on my July visit, 10 days apart, and was impressed as always at the things that should matter most to golfers –- the ability to stroke a putt that holds its line without bumps and wiggles; and the pleasure of not having to roll your ball over on the course’s well mown fairways. It took some getting used to the greens on my first round after playing the much slower local courses, but I was prepared for the second round at Caledonia, where I played and scored my best in the last two years. But golf, as we know, can be cruel when you stop thinking it is, and I made a common amateur mistake; I believed I was playing so well that I couldn’t make a bad stroke. Indeed, I stood on the 15th tee –- the 6th hole, a par three since we played the nines in reverse order –- thinking that if I birdied that hole and the rest, I would shoot my age of 70 for the first time. I made a good stroke with a seven-iron and wound up 15 feet above the hole. And then the inevitable: I tried to make the downhill putt, knocked it five feet past, got too aggressive coming back uphill and knocked it three feet past, and then missed the comebacker.
I finished with a 75, my only sub-80 round of the year, along with my only four-putt in the last five years. Golf giveth, and golf taketh away, even –- or more accurately, especially -– on the best courses.

More in this category: « The Granddaddy Shows Its Charm, Age and Blemishes Nicklaus lays it out for Pawleys Plantation members »
back to top
Back to Top