The Granddaddy Shows Its Charm, Age and Blemishes
Saturday, May 12, 2018

The Granddaddy Shows Its Charm, Age and Blemishes

In an area loaded with golf courses, only one can be the oldest…and the most historic. On the Grand Strand of Myrtle Beach, Pine Lakes International, otherwise known as “The Granddaddy,” holds both distinctions. Opened in 1927 as the Ocean Forest Club, the course was designed by a Scotsman, Robert White, who was the first president of the PGA and co-founder of the top professional golf architects association. The club’s debut presaged the eventual rise of the most concentrated golf market on the east coast, with more than 100 courses today within a 60-mile radius even after 25 went out of business before and during the recession. 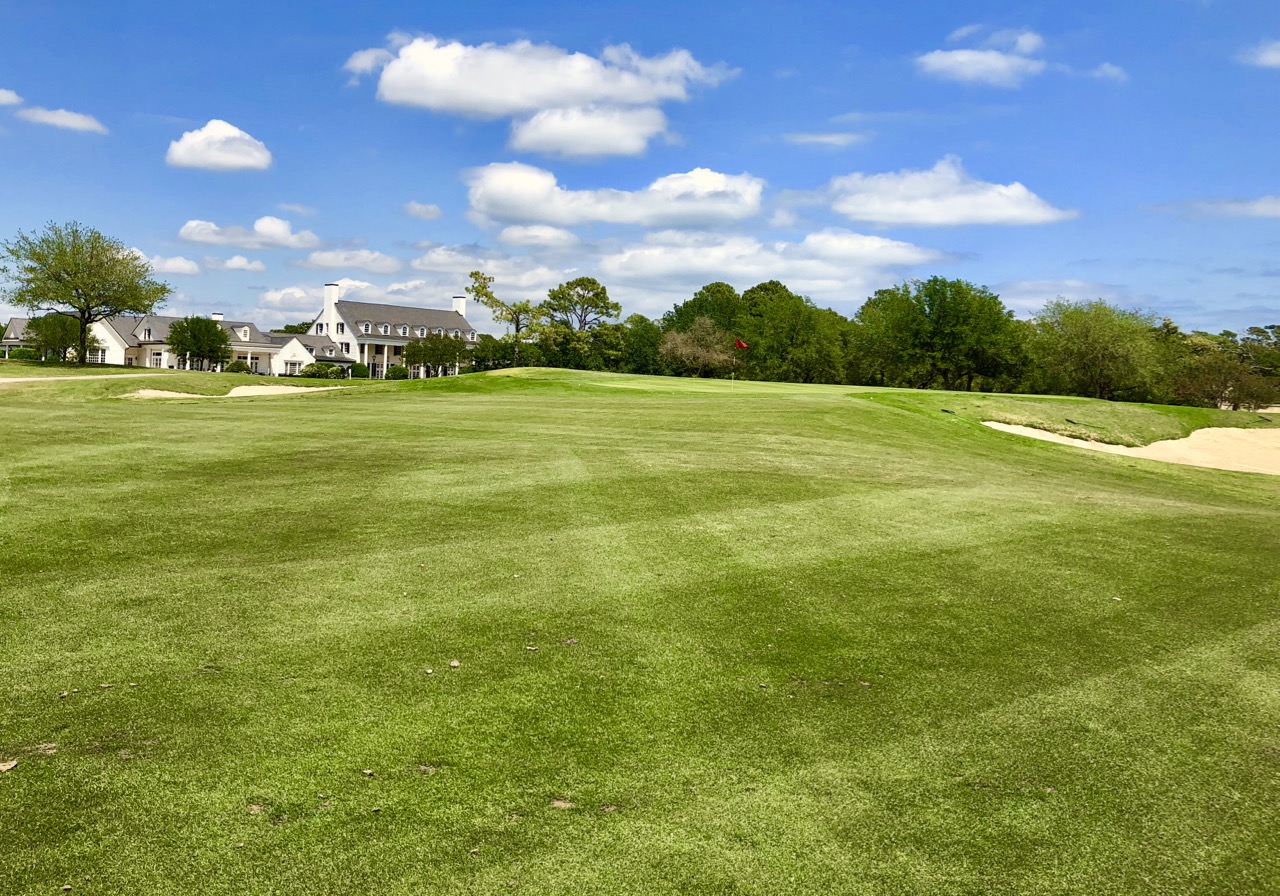 The clubhouse behind the 18th green at Pine Lakes was the site of the creation of Sports Illustrated magazine, 65 years ago.
Pine Lakes holds one other historic distinction among golf courses; it is the birthplace of Sports Illustrated magazine, which will celebrate its 65th birthday this August. Henry Luce, the publishing visionary who founded Time Inc., was not a sports fan but he understood America’s growing obsession with sporting events. He ordered more than 60 of his writers and editors to Pine Lakes in 1954 to hash out the details for what would become the most important U.S. sports magazine in history. A plaque outside the clubhouse commemorates the occasion.
The history of the Pine Lakes golf course is not quite as dramatic, but as the first course in the Myrtle Beach area, it set a certain tone for its immediate followers. The next golf course, the George Cobb-designed Surf Club, would not open until 1960. The layout at Pine Lakes was pretty much restored to its original contours and design beginning in 2006, a project that was interrupted briefly by the recession in 2008 but completed in 2009. (It is somewhat ironic that the course opened shortly before the Great Depression of 1929 and the renovation was started just a couple of years before the Great Recession of 2008.)
The year 1927 was smack in the heart of the Scottish influence on American course design and a time when Donald Ross did much of his U.S. work. In Robert White’s design, assuming the redo of the course was faithful, you see some of the classic Ross-type touches that put more emphasis on accuracy than on length. Although a course whose name contains “Lakes” must have a good number of water hazards, these are rarely an issue off the tee box but rather on approach shots to par 3s and par 4s where they guard the sides of greens, but not too close to be overly intimidating. Many more modern designs make sure that if water encroaches on fairways, strategically placed bunkers will keep errant drives from finding watery graves. Not at Pine Lakes, where if you flaunt the generously wide fairways, prepare to suffer the consequences. 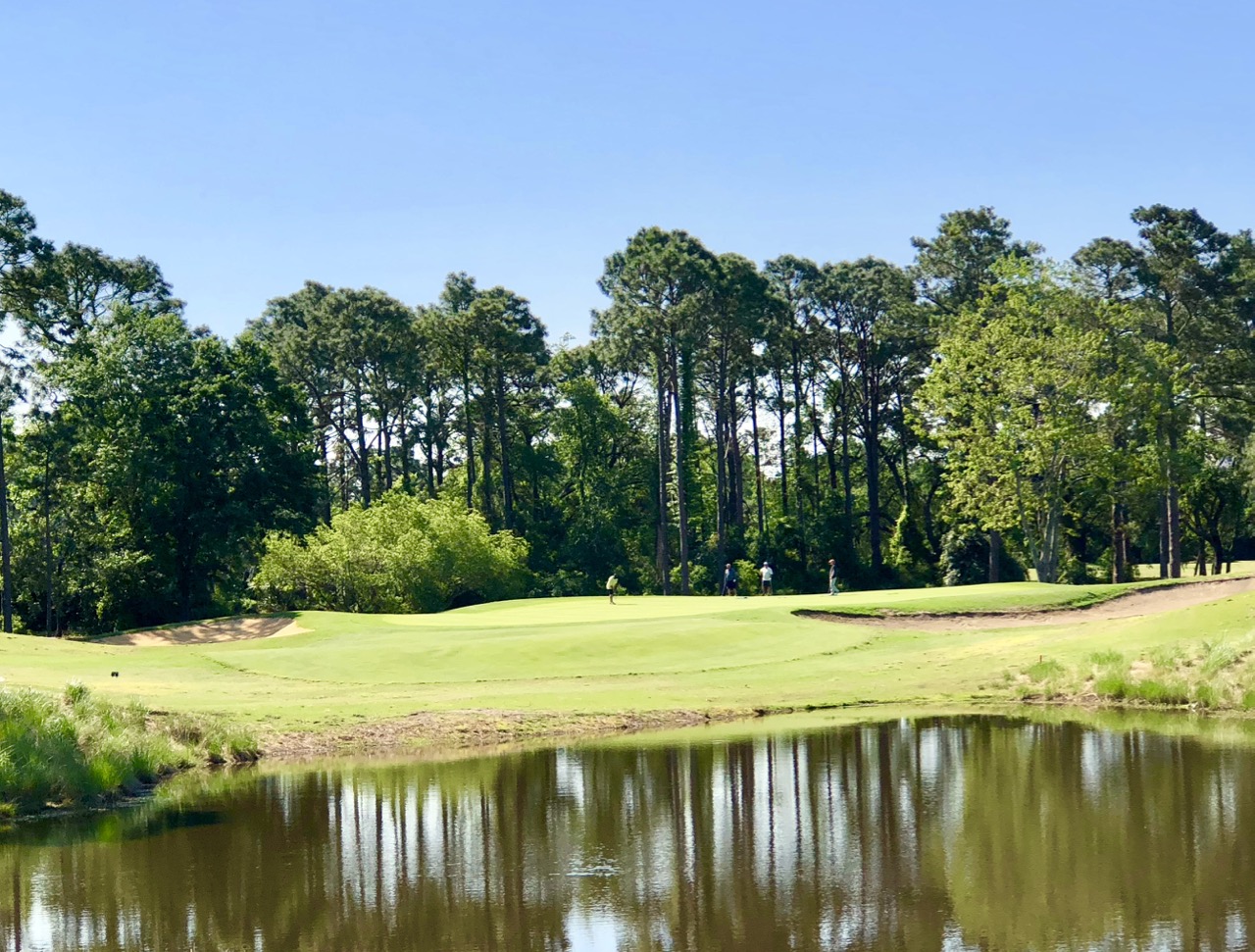 All the par 3s at Pine Lake feature water, although on #8 (not shown) it is hidden beyond the green.
I played Pine Lakes for the first time in 1969 as a 20 year old, and one year shy of 50 years later, I returned for another go at The Granddaddy last week. All I recall of that late 1960s round was that the holes were more tree-lined and seemed tighter than the other 18 golf courses in the Myrtle Beach area at the time. On my recent revisit, things had opened up somewhat after the renovation and implied that many dozens of trees had been removed for better air circulation to help, especially, promote the quality of the greens. The turf on the greens seemed fine, although in mid spring, with warm nights promoting grass growth, there is little excuse not to cut the greens a little lower than they were. Sadly, that was not the biggest issue as Pine Lakes’ receptive greens were pockmarked with divots, dozens of them per putting surface. I fixed an average of two or three directly in my line on each hole and a couple of extras along the way. As I remarked to my playing partners, a course with players who don’t fix their ball marks might consider hiring a few local high school golfers to fix ball marks in exchange for free rounds. The ball mark issue was pretty much the only flaw in an otherwise fun round on The Granddaddy. 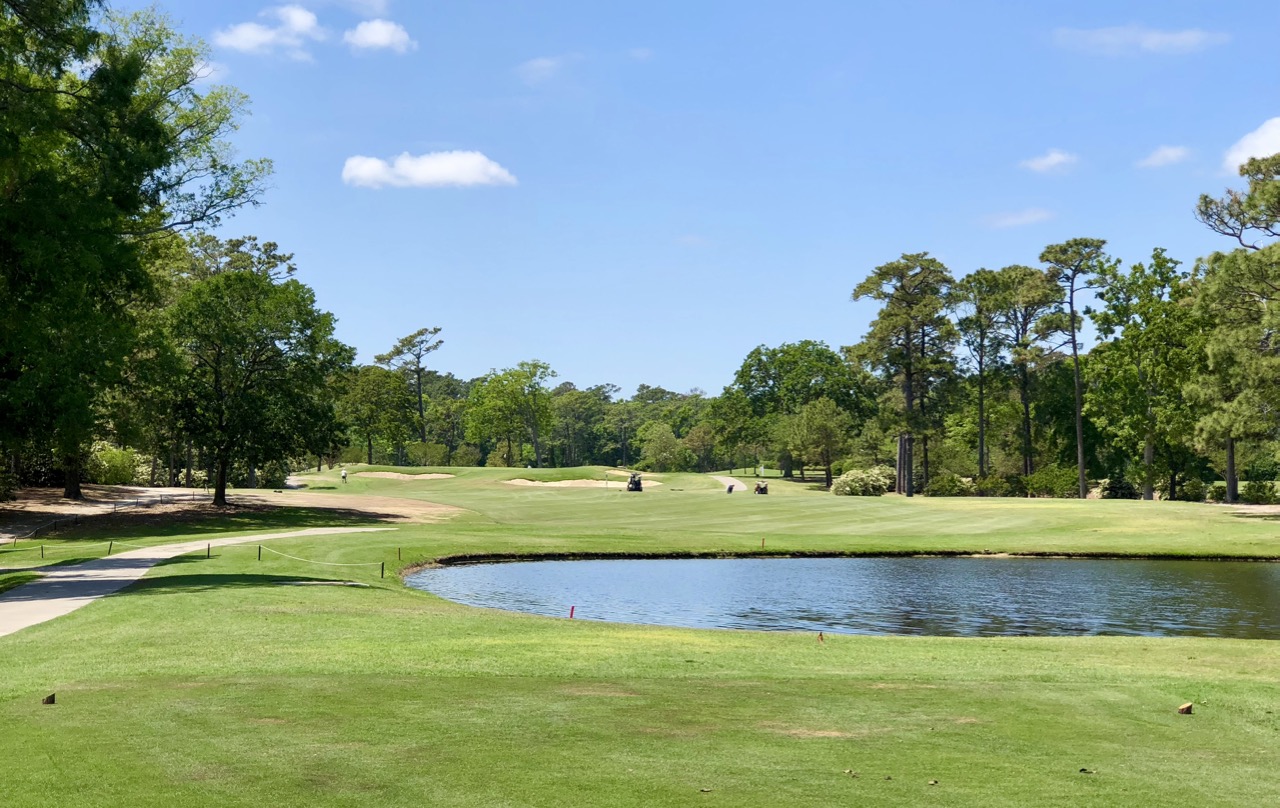 Though in evidence, as it befits the "Lakes" of the golf course's name, most water is easily circumvented at Pine Lakes.

More in this category: « Myrtle Beach Golf: Back in Business Caledonia Beats Mother Nature...and Me »
back to top
Back to Top