In the last week, I have played two golf courses in the Low Country between Myrtle Beach and Charleston that will appeal to those spry retirees and younger golfers looking for a club that encourages walking.
"Most of our members walk the course," said Director of Golf Pete Dunham about Snee Farm Country Club's golf course. That was my impression on a wet day at Snee where golf carts were confined to cart paths only; if I hadn't been toting a camera bag, I would have been tempted to walk myself, like most of the other players I saw.
Snee Farm was designed by George Cobb, and because the club has not engaged anyone to update it in 40 years, you see it pretty much the way the well-respected Mr. Cobb intended it, but with one caveat: Over time, the greens have shrunk, as happens at many courses that don't pay close attention to mowing practices, and the greenside bunkers have pulled away, making them less a hazard but also making the now smaller greens more difficult to hit in regulation. I liked the Snee Farm layout but it is likely a much more leisurely challenge than it was intended to be by Cobb. (Snee Farm has hosted the Rice Planters amateur tournament for four decades, and the winning score over four days is typically 18 under par, according to Pete Dunham.)
The other golf course, The Reserve at Litchfield Beach, is a more modern layout by Greg Norman that was recently refreshed by Richard Mandell, a Pinehurst-based architect who specializes in making good golf courses significantly better.  At The Reserve, he certainly accomplished that -– I have played both the before and after versions –- especially by reshaping fairway and greenside bunkers.  One interesting aspect of the refurbishment is the contrast in sands Mandell used -– brown, almost beach sand for the fairway bunkers and white for the greenside bunkers. It provides an interesting visual effect.  I was impressed that The Reserve doesn't hide its pull carts; they are front and center at the bag drop, a welcome sign for golfers who would rather pull than carry.  Perhaps the most impressive aspect about The Reserve is that it is part of the McConnell Golf Group; Reserve members have access to McConnell's other nine private golf courses in the Carolinas, and they are among the best (including three by Donald Ross).  I'll be featuring McConnell Golf in an upcoming blog posting.
The greens on both these courses were excellent, but The Reserve's had been cut prior to my round and Snee's, because of rain for two days before, were a little fluffy.  But the turf was clearly in good shape and will only get better as the growing season kicks into high gear.
Below is a visual taste of each course.  Look for more extended comments in the coming weeks. 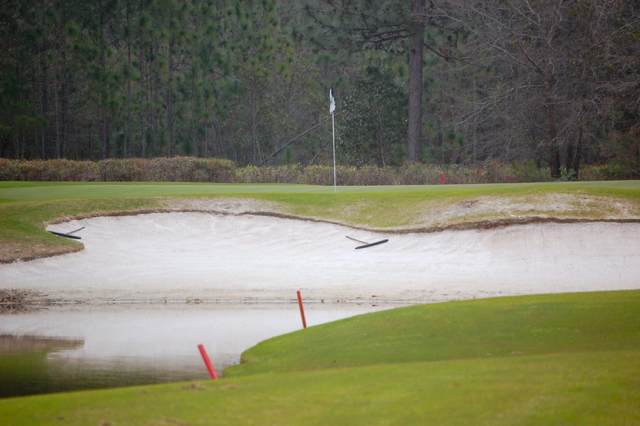 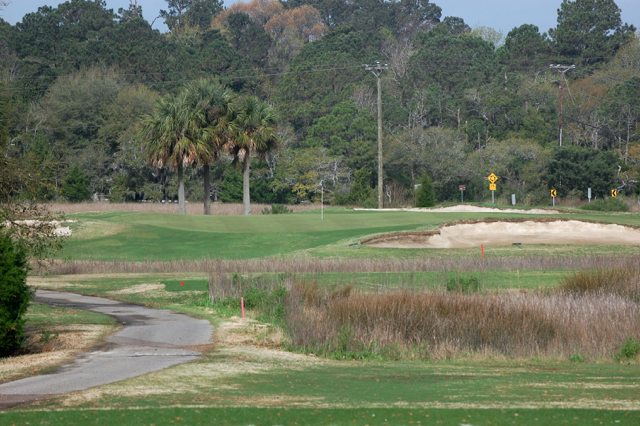 Sand and water meet at greenside on The Reserve's par 4 10th hole (top). At Snee Farm's par 3 11th hole, all manner of hazards, including a stiff wind on the day we played, can put a damper on the scorecard.

More in this category: « Family Style: Chinese investing heavily in Myrtle Beach golf Pawleys Island Food Fight »
back to top
Back to Top