I've been in the Myrtle Beach area for the last week, and everywhere I go, both on the Strand's golf courses and off, I hear essentially the same thing: "What do the Chinese plan to do with the golf courses they've bought?" And "How many more will they buy?"
In just the last two years, according to a recent article in the Myrtle Beach Sun News, China-based companies have purchased 13 of the area's golf courses as well as the sprawling former site of Waccamaw Pottery and an undeveloped section of the Grande Dunes Resort area. In addition, they have bought 100 single-family homes, signaling what very well could be the key to their interest in Grand Strand commercial and golf properties (more on that below).

$11 million for 3 golf courses
The spate of sales started with one Chinese family purchasing Black Bear Golf Club in Longs, SC, a year ago for $1.5 million, certainly not an outrageous outlay for more than 150 acres of property but probably an above market price for one of the Myrtle Beach area's lesser tracks. Shortly after, a local Realtor originally from China contacted The Classic Group, owners of Founders Club in Pawleys Island, Indian Wells Golf Club in Garden City, SC, and Burning Ridge Golf Club in Conway. In September, a sale for the three was consummated for $11 million, what local observers considered much higher than market price for the golf course package. 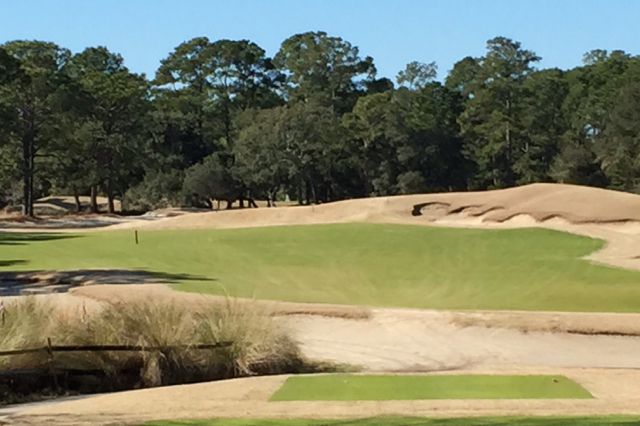 The Founders Club in Pawleys Island, originally named Sea Gull Golf Club, was purchased recently by a Chinese company, one of 13 courses in the Myrtle Beach area sold to Chinese in the last year.
Chinese interests followed with purchases of nine additional courses for $35 million over succeeding months, including a whopping $10 million for International World Tour Links in Myrtle Beach, the three courses at Sea Trail Plantation for $8.5 million and TPC Myrtle Beach in Murrells Inlet for $7.3 million. At those prices, we can't imagine there was too much negotiation.

Golf, cart, breakfast, lunch, two beers...$40
Myrtle Beach tourism suffered greatly during the recession, and no sector more so than the local golf industry. With nearly 120 golf courses operating in the mid 2000s, the 90-mile stretch of coastline from Georgetown in the south to mid Brunswick County, NC, in the north had more than a sustainable number of layouts. When the recession drove away most tourist play, some local operators panicked and dropped prices and added freebies to their offerings in an effort to keep names on their tee sheets; even today, The Legends Resort in Myrtle Beach, home to three good golf courses, offers players breakfast, lunch, two draft beers, green fees and a cart for less than $40. That has driven other local golf courses to compete on price (and throw-ins) with the inevitable loss of operating revenue, which almost always results in fewer services and poorer maintenance.

The motives for the aggressive buying by the Chinese -– local golf industry officials believe more golf course purchases are imminent -– are unclear. One could argue that the recession and consequent cash flow issues for local golf course operators depressed the value of their holdings, making sale prices attractive. But prices like $4.75 million for Indian Wells Golf Club and $3.3 million for Aberdeen Golf Club, located in one of the more remote areas from the beaches, knock down that argument. More logical is that Chinese companies have so much money and that the prospect of returns from "safe" investments are so slim that assets like the Myrtle Beach golf courses, even at inflated prices, will eventually provide better returns than investments in China or Asia in general. 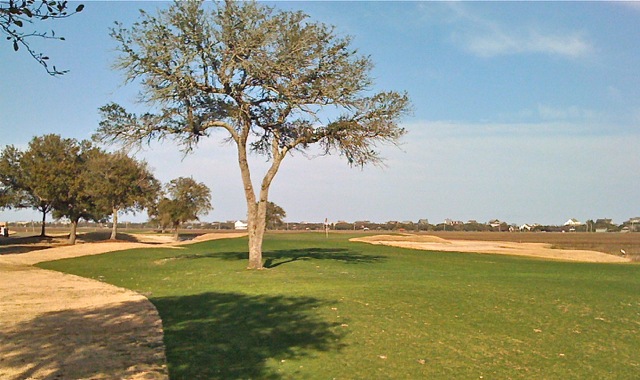 A senior official at National Golf Management, which owns or manages 18 golf clubs in the Myrtle Beach area, including Pawleys Plantation (approach to 16th green in photo), indicated recently that the company's area courses are not for sale.
But there is also a strong emotional argument for the investments in Myrtle Beach and elsewhere. The key to the Chinese motivation could be in those 100 single-family homes. A decades-old U.S. immigration program called EB-5 awards visas to foreign nationals who invest $500,000 to $1 million in a U.S. business; if a buyer can show that his investment creates or saves 10 jobs or more, then he receives visas and green cards for his children under the age of 21, as well as his spouse.
"[The investors] want their children to study in the United States," an immigration attorney told the Sun News.
Those 100 houses the Chinese investors purchased could very well eventually be home to 100 families, or around 400 people. This may be why rumors are rife in the Myrtle Beach area that the Chinese are eyeing 40 additional golf courses or more in their buying spree.

Oh boy, Congress gets involved
Despite the obvious benefits of job saving and creation, the EB-5 visa program is a victim of its own success –- and squabbling in the halls of Congress. The cap on the number of annual visas has been reached in the last few years, and the waiting lists are growing longer. Countries like Australia are now aggressively courting Chinese investment, promising a quick issue of visas, which has made some pols in Washington nervous enough to introduce legislation to streamline and expand the program. But this is an issue under the umbrella of immigration and, in Congress, it almost doesn't matter that expansion of EB-5 appears to have bi-partisan support (a Republican from Virginia, Bob Goodlatte, is pushing it).
Nevertheless, many observers believe, one way or the other, the Chinese will continue to make their investments in the U.S., and troubled golf courses will continue to be a focus. In February, at the annual meeting of members of Pawleys Plantation Country Club, just south of Myrtle Beach and one mile from the now Chinese-owned Founders Club, a member asked the CEO of National Golf Management, which owns Pawleys Plantation and owns or manages another 17 in the area, if their courses were for sale. The response was an emphatic no. But, of course, when the Classic Golf Group's three courses were sold late last year, they weren't for sale either. As ever, money – or should we say yuan –- talks.

Author's Note: For me, personally, the incursion of Chinese families into the Myrtle Beach area, where I own a vacation home, offers the promise, finally, of decent Chinese food. Myrtle Beach is an absolute wasteland when it comes to a cuisine I love and have eaten all over the world, including in Beijing. I look forward to the day when an ad for one of the area's golf courses touts "Best Golf and Dumplings on the Beach."

More in this category: « Low Country's Dataw Island Only Feels Secluded Flat courses make walking a good option »
back to top
Back to Top