You can never communicate too much with your key constituents, especially when you are trying to engage them as adjunct salespeople. The current owners of The Cliffs Communities, Arendale Holdings Corp, are sharing a refreshing amount of data with their property owners and club members. 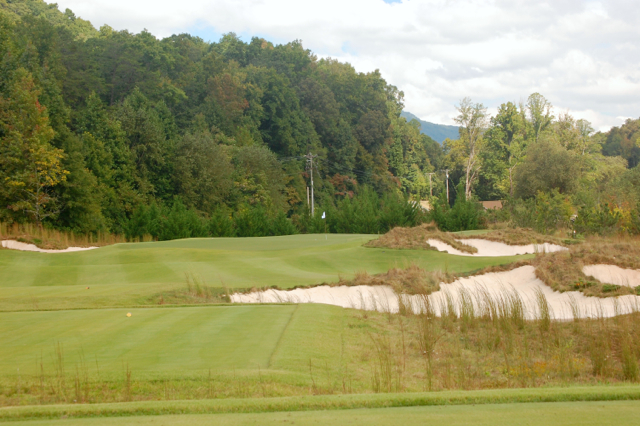 The first hole at Gary Player's Mountain Park golf course signals an abundance of sand and whispy grasses throughout the round
A recent community-wide letter from managing partners Robert Wright and David Sawyer represents positive news for Cliffs property owners and club members who have been waiting for visible signs of stability at the formerly troubled luxury development. Potential buyers waiting for signs of progress since ownership issues at The Cliffs were settled a couple of years ago should also take note. Here are just a few of the highlights of the letter:

• 62 transactions through August at an average $572,000 each, compared with 75 transactions in the same time period in 2013, at an average of $373,000 per sale. (Note that although the numbers of transactions are off slightly, the significant jump in average price may imply the time is right to consider property at The Cliffs.) Cliffs Communities officials expect the fall season sales figures to be solid as well.
• The total of initiation fees collected by The Cliffs golf clubs doubled compared with the same period last year, from $1.4 million to $2.8 million. The Cliffs is now charging a $50,000 fee for full golf membership, down from charges as high as $125,000 previously. Club owners expect to generate nearly $18 million in dues revenue in fiscal 2014.
• Arendale has spent more than $4.5 million on a number of projects, including the clubhouse known as "The Cabin" at the new Mountain Park golf course in Travelers Rest, outside Greenville; nearly $500,000 to renovate the golf course and practice greens in the Keowee Falls community; and $870,000 in building repairs and maintenance across the multiple golf communities.

The positive sales numbers and uptick in club memberships may signal that The Cliffs real estate prices are be poised for modest to strong improvement. For those who follow the "smart" money and invest accordingly, the financial backing behind Arendale has luxury and success written all over it. Reinet Investments, whose former parent maintains a portfolio of luxury brands that include Cartier, Montblanc, Val Cleef & Arpels, Baume & Mercier, Peter Millar and Alfred Dunhill, has added high-end American golf communities to their holdings, including north Georgia's Currahee Club.
This may be the appropriate time for those who have been waiting for signs of progress at The Cliffs to take a closer look. I recently played the new Gary Player Mountain Park golf course near Greenville and was impressed with the layout and the services, even though the attractive "cabin" clubhouse is more rustic than the typical lavishness of a Cliffs facility. (Look for photos and a few words in this space in coming days regarding my Mountain Park round of golf.) Contact me for a personal introduction to our Greenville, SC area real estate agent, a former sales executive at The Cliffs, who will be pleased to share her observations on the progress being made at The Cliffs. 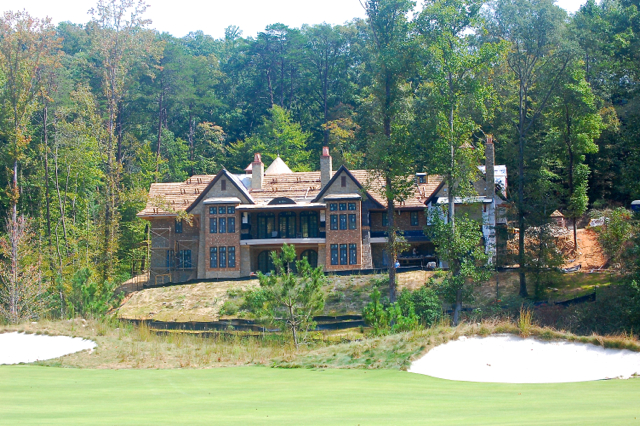 There are signs of construction after a few years lull at The Cliffs Communities.  This one caused a few recent golfers to stop and stare from the adjoining fairway at the Mountain Park golf course.

More in this category: « Two top Greenville, SC, golf courses on tap next week DeBordieu Colony: A Beach of One's Own, and Dye Golf too »
back to top
Back to Top