If you want to be happy for the rest of your life...buy a golf home in Columbia, SC

Some years ago, I was touring the excellent links course on Bald Head Island, SC, with a local real estate agent. As we passed a row of nice beach style homes along one of the fairways, the agent pointed to two houses side by side and told me that the husband in one had run off with the wife in the other. He said it wasn't the only time divorce had occurred in that little bit of paradise.
I've heard similar stories repeated elsewhere. At one upscale Bluffton, SC, golf community, a man from upstate NY visited his under-construction golf home. The next-door neighbors were away during his visit, and when they returned and heard he had been there, they asked the golf community office for his home phone number in order to welcome him to the community. His wife answered the phone and confessed no knowledge of the new golf home. They were divorced shortly thereafter and, presumably, the man moved into the house with the mistress for whom he had built it.
Relocation is filled with enough angst that no couple should worry about whether there is much chance of marital disharmony in the new home. Men's Health magazine recently published an article that, for better or worse, for the rich and the poor, purports to identify marital safe havens across the country. The top 3 are not exactly retirement destinations – Madison, WI, (maybe it's the cheese), Pittsburgh, and Philadelphia (must be those glorious cheesesteaks). But firmly in place at #4 is the only city in the Southeast that made Men's Health's Top 20 for low divorce rates, Columbia, SC. 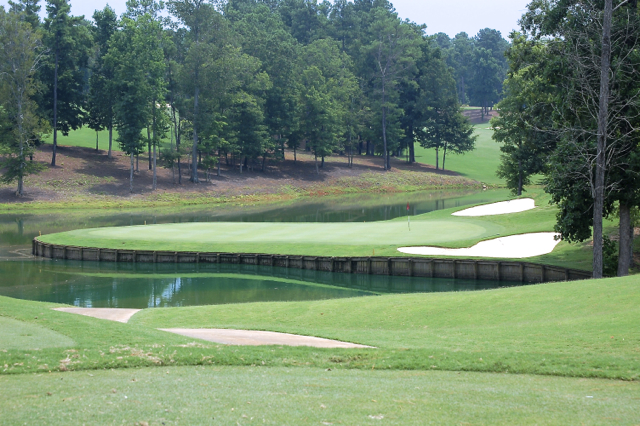 The 27 holes by P.B. Dye for Cobblestone Park show many of the distinctions of a
modern golf course.  D.R. Horton is now in charge of most of the community.

We think we know why. First of all, it is the state capital and home to the large University of South Carolina, which offers top flight sporting events, academic courses for baby boomers, and instills in the surrounding area a diversity of thought and debate in short supply in the rests of the state (yup, blame it on those liberal professors). But Columbia also boasts a variety of golf communities to suit every taste and playing ability. Among the best is Woodcreek Farms, which hosts an annual professional golf tournament on the NGA Tour (some may remember it as the Hooters Tour) on its highly rated Tom Fazio golf course. Initiation fees and dues are reasonable for this quality of golf and its other country club amenities, the more so because membership buys you privileges at the nearby WildeWood Country Club, set in another nice golf community with equally stately and reasonably priced homes. Both Woodcreek and WildeWood homes currently for sale start in the $300s.

A bit outside town but in the growing burgh of Blythewood, Cobblestone Park has had a wild ride, financially speaking, since being purchased by the bad boy of golf developments, Bobby Ginn, in the mid 2000s. The Ginn group left a lot of buyers feeling as if they had been had with overzealous sales techniques and overpriced lots, and today some folks are still holding pieces of land they bought for $200,000 that are worth no more than $15,000 today. National builder D.R. Horton has stabilized things by buying up most of the remaining properties, and during a recent visit, the community was humming with construction activity. The problem for the original property owners is a boon for new buyers –- prices for new home packages that begin in the $200s. The 27-hole semi-private golf course, one of the most popular in the area, sweeps through the community, but if you really want a private club, the nearby Columbia Country Club is reasonably priced and classic.
Marital bliss and a good golf game are an ideal combination. If you'd like some help finding it, contact me for additional insights on Columbia's golf communities. 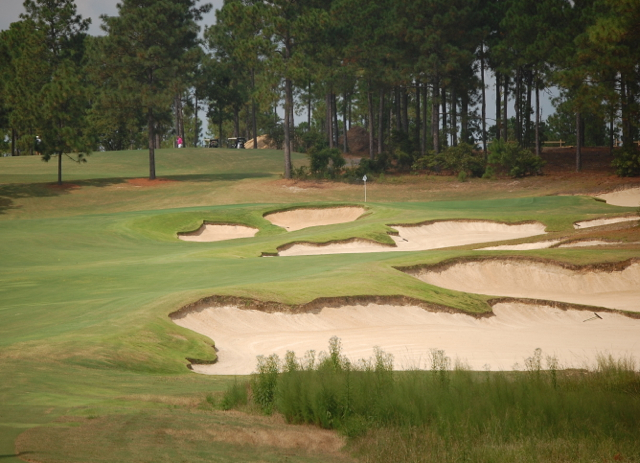 WoodCreek Farms bears the marks of its designer, Tom Fazio.

More in this category: « Heritage: Sleeper golf community in Pawleys Island Golf Community Discovery Weekend/Greenville, SC »
back to top
Back to Top