Myrtle Beach is a grand buffet of golf. But as it is with most buffets, there are options that taste good and are good for you, and then there are the other kinds. And so it is with Myrtle Beach golf, despite the "equality" of choice the golf vacation marketeers tend to ascribe to all the local courses. If Caledonia Golf & FIsh Club is not the best of all 100 layouts between Georgetown, SC, and Southport, NC, I have not played the better one yet (and I estimate I've played 60% or more since 1970). 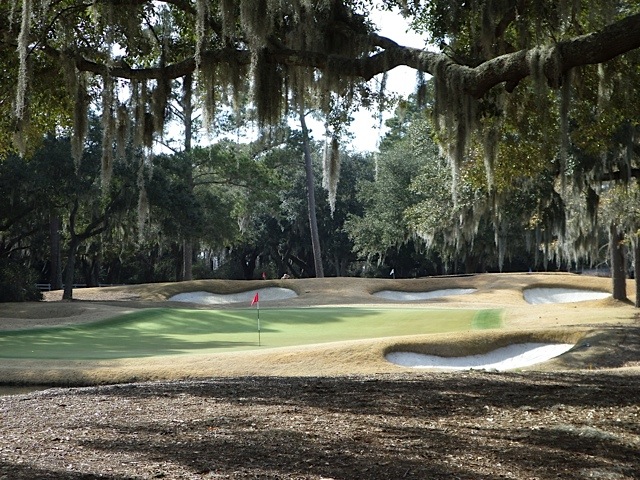 The green on the par 5 8th at Caledonia is two-tiered; don't be on the back when the pin is up front.

Caledonia is an old hunting and fishing preserve, and the fish club still persists at the end of the long, live-oak-draped drive into the property. Caledonia is not a golf community, as the only two or three homes that abut the course -- and they are mostly hidden behind trees -- are in the adjacent Ricefields neighborhood. But the club can boast an intimately sized clubhouse that serves outstanding lunches.  Best of all, you can live within five minutes of Caledonia and join the club on an annual basis for $1,900 and play as much as you'd like there and at its almost-as-good companion across the road, True Blue Golf Club. For those who can arrange to play two or three times a week throughout the year, there are few better bargains in golf. (Note: During peak seasons, you'll have to plan your rounds in advance so as not to be shut out by the package players who flock to Caledonia and pay upwards of $200 for the privilege.) 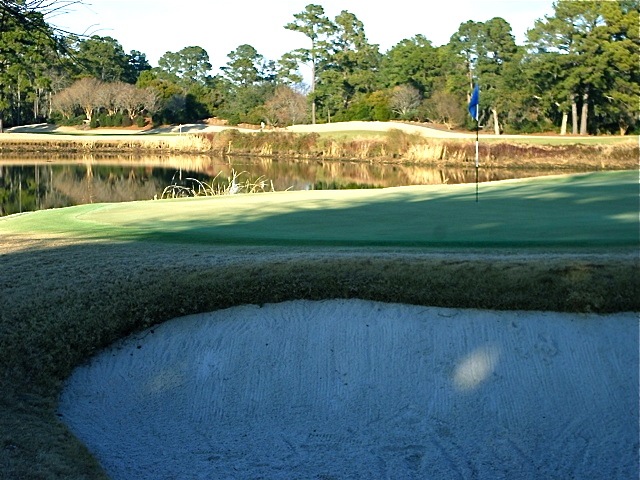 The approach over the water at #18 can make or break a round...and cause a bit of embarrassment if the porch behind the green is crowded with spectators.

Caledonia's designer, the late Mike Strantz, showed more respect for the natural landscape at Caledonia than at any of the other courses in his small, but distinctive oeuvre. If you have played Tobacco Road in the sandhills of North Carolina, or Tot Hill Farm not far from there and even True Blue, where sand is more dominant than fairway, you know what I mean. But although Caledonia has its unique holes -- some would say quite a few -- there is nothing on the order of Tobacco Road. In fact, the introduction to the course is as ordinary as a par 4 gets, straight away, a few houses through the trees lining the right side of the hole, the green slightly raised and just one fairway bunker to catch an offline tee shot. It turns out that for reasons that remain a bit clouded, Strantz and his helpers laid out only 17 holes. Once the miscount was caught, the only place to squeeze in another hole -- the out of character #1, it turns out -- was on a strip of land purchased in emergency mode from the developer of the neighborhood next door.        The rest of the layout, though, matches the course's lofty reputation, challenging most of the clubs in your bag, especially those you might use around the greens you are bound to just miss. You can put up a good score at Caledonia, but don't get cocky on #18, where a drive down the right size is tempting, given the shorter approach to the 120 foot long green, set almost directly under the deck outside the clubhouse dining room. If your golfing buddies finish before you, count on them to be sitting in the rocking chairs on the deck, drinks in hand, ready to hoot or holler depending on your approach shot and, potentially, your 100 foot putt.

More in this category: « A tree falls at Pawleys Plantation Golf Club; not the unkindest cut Excellent Value Keowee Key Golf Community Hidden in Plain Sight »
back to top
Back to Top