Plenty in Reserve at Lake Keowee at the end of two couples’ searches for golf homes
Tuesday, May 21, 2013

Like life itself, the search for the perfect golf home often takes some unexpected turns. You should always have a plan and follow it when you are looking to invest hundreds of thousands of dollars but, as Yogi Berra once said, “If you come to a fork in the road, take it.”

Barry and Carol Hudson, most recently of Fayetteville, NC, learned the lessons of flexibility when they went searching for their perfect golf home. They knew they wanted to live in a golf community in the Carolinas, but they thought it would be on the coast. They went so far as to put in a bid on a home in the sprawling Dataw Island golf community after visiting 10 other golf communities in the Carolina Lowcountry. If their bid had been accepted, they might be living happily ever after in a marshland community that features two excellent golf courses by Tom Fazio and Arthur Hills. Instead, they find themselves a full five hours from the coast, on a beautiful lake in a community, The Reserve at Lake Keowee, with one fine Jack Nicklaus golf course. 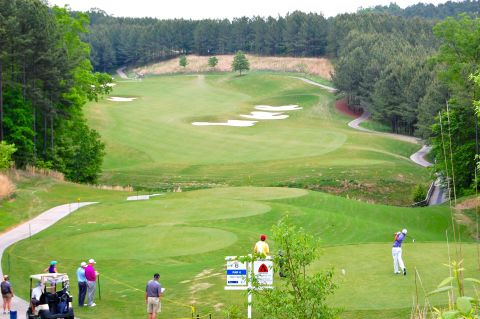 Competitors in the BMW Charity Pro-Am tee off on the 6th hole at The Reserve at Lake Keowee, one of three venues used on the first three days of the tournament.  (The others are Greenville Country Club's Chanticleer course and Thornblade Club.)

Dick and Chris Bishop of Vienna, VA, just outside of Washington, D.C., had water on their minds, as well as mountains and good golf, when they began their search for a golf home, even though they were not boaters. “We just like to look at it [the water],” said Dick. There are dozens of golf communities that would have fit their ideal location, but as so often happens, friends who had purchased a property in The Reserve at Lake Keowee urged Dick and Chris to take a look there.

“We thought a golf course was the number one amenity we were after,” says Dick, “but when we found the perfect lot, that turned out to be our top amenity.” That lot, which has some of the best lake views in the community, has had a big beautiful house on it since 2008.

“We built it with our family in mind,” says Chris, referencing the three daughters, their husbands and nine grandchildren who visit at least once a year. 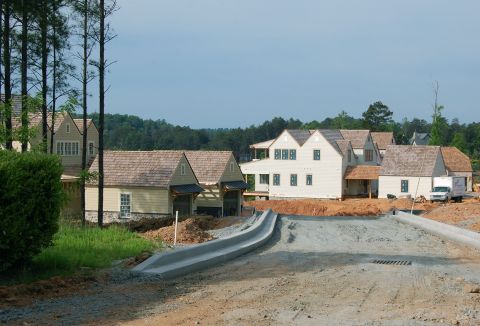 High-quality golf communities like The Reserve at Lake Keowee are seeing a resurgence of interest now that the economy is on more solid footing.  Homes being built in the Village Point section, adjacent to the lake and Village center, start in the $600s.

When you talk with experienced golf home prospectors like these two couples, you understand that flexibility may be the most important characteristic in a golf home search. Both couples had lived suburban lives for decades, with plenty of services and conveniences nearby; and yet, they wound up in what, by most definitions, is a remote part of the South, Sunset, SC, a half hour from the town of Clemson and a full hour from Greenville. Such distances don’t lend themselves, say, to dinners out that include a couple of glasses of wine and then a drive along dark country roads. But you learn to make accommodations.

“If we know we are going out to dinner in Greenville,” said Dick Bishop, “we usually bring a designated driver along with us.” Grocery shopping also tends to be a communal exercise in a community like The Reserve; if the Bishops are heading to the supermarket in Easley, 20 minutes away, they’ll ask their neighbors if they need anything. The neighbors return the favor.

Carol Hudson confided that she would have been content to live in or near the city of Greenville itself; the Hudson’s son and wife and their young children live there.

“But it is so beautiful out here by the lake,” said Carol, “that I was convinced.” Both the Hudsons’ son and a daughter who lives in Oklahoma and visits once or twice a year have become “Legacy” golf club members who have all the club privileges of their parents without any additional dues payments.

“The Legacy membership is a nice benefit for our family,” says Barry.

Golf overall at The Reserve is a big deal, so much so that, despite what may seem a hassle at some other clubs was welcomed by most club members at The Reserve –- a professional golf tournament. Preparations by the PGA Tour closed the course for a week prior to the Web.com tour’s BMW Charity Pro-Am event last weekend, and then for the three days of the

tournament itself, but few residents complained, according to the two couples.

“It’s a minor inconvenience,” said Barry Hudson, “but we are happy to have the tournament on our course.” (At 7,112 yards, The Reserve was the longest of the three in the tournament rotation. The course, which I’ve played, is no pushover, but suffice to say that the tournament winner finished 27 under par, most of those on the Thornblade Club course but 9 of them at The Reserve. Indeed, these guys are good.)

Dick and Chris Bishop not only welcomed the tour event, they also jumped right in to help run things at The Reserve. (The BMW Charity Pro-Am field plays the first three rounds on three different Greenville area golf courses, then at the Fazio-designed Thornblade Club for the fourth and final round.) Dick Bishop was named co-chairman of The Reserve’s part of the event and was glued to his golf cart for the three days, making sure things went smoothly. (They did.) More than 120 residents of The Reserve volunteered to be walking scorers, hole marshals, drive shuttle vans, serve food and drink and provide hospitality services for players and guests during the tournament.

“I loved to see the pros play the course I play every week,” said Dick.

Both couples supervised the building of their homes at The Reserve and tout the benefits of having things laid out just the way they wanted them.

“We were always going to build,” said Dick Bishop, who conceded that their project went smoothly in 2006, “and we enjoyed the process with the architect and builders.”

For the Hudsons, the process was not quite as smooth, with a number of “redos” necessary along the way, an issue that didn’t seem in retrospect to bother Barry too much.

“Carol wound up being the ‘foreman’ on the project,” he admitted.

More in this category: « Market Confidence: Reserve at Lake Keowee adds new neighborhoods Catching up after a few glorious days of Lowcountry golf near Beaufort, SC »
back to top
Back to Top