The former Daufuskie Island Resort, and one of its two well-regarded golf courses, The Melrose Golf Club, has been sold to a Utah-based investment group and will operate as the Melrose at the Beach resort.  The Bloody Point Golf Club, a pool and the Breathe Spa were split off from the former resort and are now family-owned and operated.

The report that Pelorus Group of Salt Lake City had purchased the resort and its Melrose Golf Club comes as good news to homeowners on the former resort's grounds, as well as to those residents of Haig Point, the private golf community on the other side of the island that features 29 holes of Rees Jones golf. (No typo; Jones designed two extra holes.)  For much of three years, the Daufuskie resort’s only sign of life was the fine Jack Nicklaus designed Melrose course, which had remained open through the persistence and passion of its golf pro and superintendent. Sadly, erosion of the seawall has collapsed the dramatically sited 18th green; we will keep an eye on how the new owners handle renovations.

The nearby Tom Weiskopf Bloody Point layout had become overgrown, but a new owner, Brian McCarthy, stepped in last year, hired Davis Love's design firm to renovate the golf course, and is expected to re-open Bloody Point before the end of the year.  A restaurant in Bloody Point's clubhouse has been open for the last year, and the McCarthy family is converting the former Breathe Spa into a seven bedroom cottage. 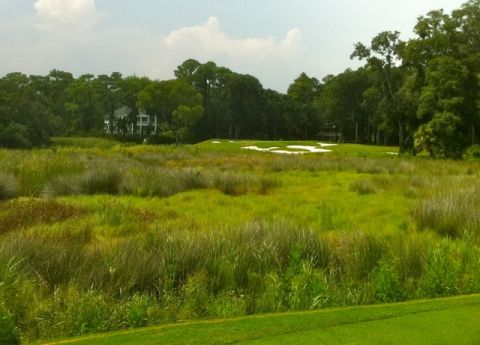 Plenty of marshland and live oak trees encroach on the Rees Jones layout at Haig Point, but the impressive homes are well back from the field of play.

The resort’s tentative status over the last few years had depressed real estate prices across the island. Prices at Haig Point are considerably lower than comparable real estate on the mainland, and golf membership in the private club typically transfers with sale of property in the community (a $65,000 value, according to club officials). Total carrying costs for club dues and homeowner fees, which includes the cost of the private ferry service, are slightly higher than at comparably upscale golf communities on the mainland.  Yet Daufuskie -- Haig Point, Melrose at the Beach, and Bloody Point -- is an undeniably beautiful place, and you cannot put too high a price tag on an island with no cars, no noise (other than that of Mother Nature), no pollution and a walk-up-and-play aspect to its three excellent nine hole layouts (plus those two extra holes out on the marsh).

For a sample of current golf homes for sale at Haig Point, please click here.

This article has been revised with additional and clarifying information.  We thank Julianna McCarthy, Vice President of Sales and Marketing at Bloody Point Golf Club and Resort, for her assistance.