A Place For The Ages: Reserve at Lake Keowee appeals across generations
Tuesday, October 25, 2011

A Place For The Ages: Reserve at Lake Keowee appeals across generations

Written by  Larry Gavrich
Rate this article
(1 Vote)
When I first visited and reviewed The Reserve at Lake Keowee in 2006, the fledgling development was operating in the shadow of The Cliffs Communities, whose $14 million annual marketing budget at the time was both a blessing and a curse for the more financially conservative Reserve.  The mighty Cliffs used some of its marketing power to purchase billboards near the Reserve’s own front gate, a clear invitation to prospective buyers to drive past and head for one of The Cliffs own Lake Keowee communities.  In the realm of unintended consequences, though, many of the people The Cliffs drew to the area heard about The Reserve and thought, “What the heck, we’re here anyway, let’s check it out.”  The Reserve was happy to play Remora fish to The Cliffs sharklike marketing strategies.

Of course, The Cliffs all-in approach to the luxury lifestyle worked well in attracting wealthy second-home owners and retirees until the economy went poof and property sales dried up and, along with it, cash to pay for The Cliffs’ unfinished amenities, including the first American golf design by Tiger Woods.  As any reader of these pages knows, Cliffs developer Jim Anthony was forced to borrow $64 million from his club members, with a reported $8 million payment on that note due this coming January.

The Reserve chose a different, more measured approach, its founders opting to retain a majority interest in the community but bringing in an experienced developer, Greenwood Communities and Resorts, as a strong minority partner, whereas Cliffs founder Anthony chose to build his own development team.  (Some Cliffs owners grouse today that the spiritual, plain-speaking and, perhaps too-trusting Anthony was victimized by bad advice from some of his hand-picked executives.)  Greenwood had originally developed the successful Palmetto Dunes Resort on Hilton Head and, 30 years later, is still managing that golf community plus a few choice others. 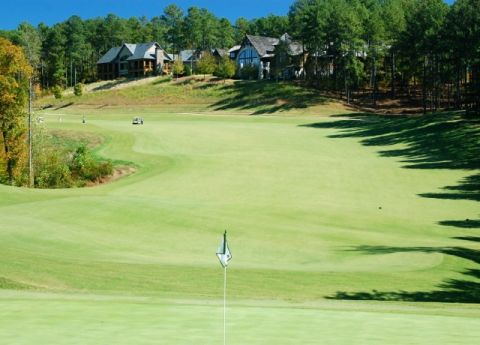 Along most of the Jack Nicklaus layout at The Reserve, you will need to look up to see any homes as they are perched on hills and rarely encroach on sightlines.  The view here is from behind the 11th green.

Since it opened in 2002 with an exquisitely conditioned and enjoyable Jack Nicklaus Signature golf course, The Reserve’s founding members, a group of 55 local and Atlanta-based investors that included 19 physicians and two dentists, as well as Greenwood, have taken a steady approach to its evolution.  Whereas, for example, The Cliffs’ lush fitness centers could satisfy the needs of a professional football team, The Reserve’s own dreams of a world-class fitness facility are on hold pending a bit more cash flow; anyone who wants to work out today can, but the temporary center operates out of a modestly sized building near the clubhouse.  Reserve officials say building the new facility is their “top priority” as soon as the economy improves and, along with it, property sales.  The biggest difference between the two communities is that where The Cliffs offers its members six golf courses, with a seventh Gary Player track on the way next year, The Reserve presents just one, with another by Arnold Palmer’s design shop sitting in an architect’s drawer waiting for the right time to execute it, financially speaking.

To ensure bank funding through at least 2015, The Reserve recently promoted a “capital raise” campaign that attracted 67 new members to purchase shares in the community; some of the original 21 investors and Greenwood itself added to their existing financial stakes in the community, demonstrating both commitment and confidence in their vision and fiscal discipline.  This year, the Reserve expects to balance its first budget in its 10-year history, and without having increased dues or initiated a food and beverage minimum.  Any potential golf community buyers worried about the financial stability question in a high-end development should find their questions answered and their anxieties assuaged at The Reserve, at minimum for the next three-plus years.

I toured The Reserve recently with A.J. “Buddy” Thompson, one of the two original founders of the community.  After purchasing five lots on nearby Lake Jocassee in 1990, Thompson, an ophthalmologist from Easley, SC, fell in love with the unusually lofty views around Lake Keowee, which like Jocassee was formed after Duke Power flooded the area in 1971 for hydroelectric power purposes.  Lake Keowee is somewhat unusual in that it features both a lake and mountains, a topographical idiosyncrasy more prevalent in the western U.S. than in the east.  Thompson assembled the group of 54 other investors who bought 3,200 acres in June 1999 that comprise most of today's Reserve  –- “just before the dot-com bust,” he says.  They each contributed $300,000 plus a capital investment of $100,000; one neighborhood in The Reserve, called Founders Cove, celebrates that initial investment.  At a time when banks were freely lending money, that initial total pool of $8 million from individuals and Greenwood attracted bank funding to buy the rest of the land and kick start the development. 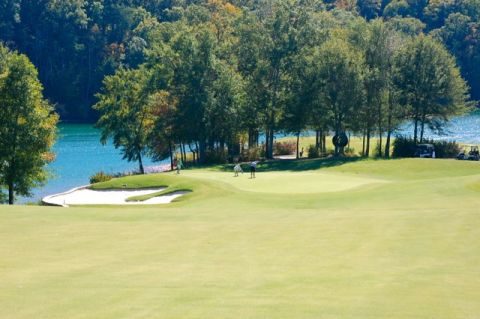 Lake Keowee comes into view but not really into play on a few of the finishing holes at The Reserve.

The Reserve’s founders were measured in their approach right from the earliest days.  In December 1999, the 55 original investors and 25 others met at the Hyatt Hotel in Greenville.  They split into eight teams, each challenged to envision their dream communities and then present to the other groups.

“The best bits were pulled from all the presentations,” Thompson told me.  “We agreed from the start that we did not want to be a resort community, and that this was a ‘one and done’ community that we all wanted to live in.  We would not be building a second Reserve later.”

Aside from a decision to get the golf course built early, the only pre-requisite for the community was that it be built as a place where families and friends would be encouraged to congregate, says Thompson, a grandfather.

“The inspiration for the idea was my fond memories of my family reunions around our lake home on Jocassee,” he says of Keowee’s sister lake, reputed to be the cleanest in the eastern half of the country.  “That’s the kind of atmosphere we saw for The Reserve.”

Building a Legacy one large family at a time

The family thing is not mere brochure copy.  Earlier this year, The Reserve announced a new, innovative “Legacy” membership that provides full privileges to everyone in the direct family line of a Reserve member –- parents, grandparents, children and grandchildren.  Part branding, part reaction to the economy and the need to generate additional club revenues in the face of modest property sales, the

Legacy membership is consistent with The Reserve’s family-centric ethos.  It also has proved wildly popular with owners:  The club has added more than 650 new legacy members from 163 families since the program was announced in January, building more traffic to the pool, marina, market and golf club, and adding a healthy dose of incremental revenues.  What may have struck some competitors as an ill-conceived and sappy giveaway to members appears to be a brilliant business decision that has stoked both member retention and growth -– a prime example of benefitting financially by walking the talk.

The Reserve is somewhat iconoclastic in other ways.  Its 4,000 acres were scoped out initially for just 1,630 home lots, but the guiding forces in the community are discussing dropping that to 1,400 (as other developments increase density to appeal to a broader base of buyers).  As an aside, Buddy Thompson says he’d like to see that number at 1,100 home sites.

“Our lots must have intrinsic value,” he emphasizes, explaining that The Reserve does not want to offer what other golf communities sometimes define as “interior” lots but are nothing more than leftover home sites with the cheapest price tags.  “We prefer to glorify and preserve the natural beauty and surroundings with a significantly lower-density approach.”

At first view, some prospective buyers will consider The Reserve real estate on the expensive side.  Although some of the rustic guest cottages begin in the $400s and would be perfectly suitable as a second home or rental income unit, the sweet spot for single-family homes in the community is right around the $1 million mark (single-family homes currently

Club and homeowner dues at The Reserve are indicative of golf communities with lower priced real estate.
listed at The Reserve web site range  from $635,000 to nearly $5 million).  But in keeping with a style of unpretentiousness that Buddy Thompson noted for me a few times, fees and dues at The Reserve are modest.  Even with the push for budget neutrality this year, the club has not seen fit to raise its $425 monthly dues.  Homeowner association dues run to just $1,452 annually, lower than many communities whose real estate prices are half those at The Reserve.  And for fully occupied homes, property taxes are as low as you would expect in the South.

For a family or retired couple more worried about ongoing charges than the one-time outlay for a home and club membership, The Reserve offers about the lowest ratio of club and homeowner dues to real estate prices that we’ve encountered.  And they seem serious about keeping it that way.

More in this category: « Reserved at Lake Keowee: Upstate SC community celebrates lack of pretension Thornblade Club, Greer, SC: Where golf champions live, work and play »
back to top
Back to Top