Tim Gavrich is a senior at Washington & Lee University and a four-year starter on the school’s golf team.  He has written frequently on golf architecture and other golf issues at this site and at Examiner.com, where he is editor of the magazine’s Hartford (CT) golf edition.

A Mike Strantz masterpiece and legacy

The term “great” gets thrown around often and loosely.  Great movie, great meal, great football game -– everyone has their own subjective definition of what constitutes greatness.  With some trepidation, therefore, I define the characteristics of a great golf club as having a course, practice facility and cozy, inviting clubhouse (with tasty food) that makes members want to spend all day on-site.  A well-appointed locker room certainly can’t hurt either, and neither can a friendly group of members and attentive, helpful staff.

On a miserably cold, rainy January day, my father and I found all these qualities at the private Bulls Bay Golf Club in Awendaw, SC.  Bulls Bay is located about half an hour north and east of Charleston, just off Highway 17, the main coastal road that starts in Winchester, VA, and heads east before moving down the Carolinas coast, bisecting Florida and ending near Fort Myers.  Although many cars pass by the Bulls Bay entrance every day, few probably notice what is behind the modest sign depicting a bull’s skull, the club’s main logo.  The entrance road unwinds through trees beyond a keypad-activated gate, and as you turn out of the woods, you are greeted with a view of a man-made hill more than 60 feet high, with a clubhouse at the top and golf holes surrounding it, reminiscent of the iconic top-of-the-hill clubhouse at Shinnecock Hills Golf Club on Long Island. 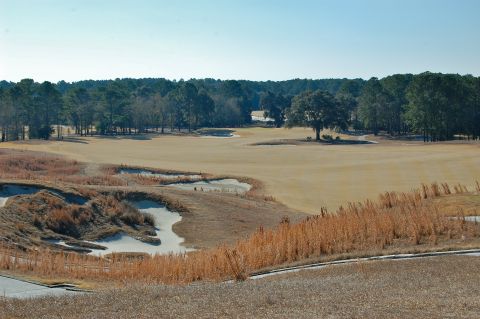 The first hole gives a strong hint of designer Mike Strantz' overall theme at Bulls Bay -- generous landing areas that must be negotiated carefully to have reasonable approach shots to the imaginative green complexes.  From the 1st tee, the a drive down the right center provides the short way home.  Too far right, and you might be playing for a "barkie" par.

-- All photos by Larry Gavrich

The Bulls Bay bag drop and cart barn (the course would not be an impossible walk, but most players choose to ride) are located

down the hill from the clubhouse, beside the sprawling practice facility.  The range is wide enough to accommodate dozens of players, and the putting green is expansive as well.  Short game areas lie at the other end of the range near “The Ranch,” a high-tech golf instruction pavilion available for use by the membership.  Flyers posted in the clubhouse commend The Ranch’s “Most Improved Players,” a nice touch I have not seen at any other club.  The clubhouse bulletin board also touts the comparatively low handicaps of its membership. The clubhouse itself is cozy and well appointed, and the locker room is highly functional without being ostentatious.  The dining area, the staff, the food and drink they served us was wonderful; the Italian chicken sandwich might have been the best thing I’ve ever eaten at a golf course.

The members are easygoing too, if those who greeted us at the back of the 9th green are indicative.  My father had just sunk a putt for birdie after skimming his approach over the back of the putting surface, up the hill beneath the clubhouse and then down to just 2 ½ feet from the cup.  “Why didn’t you give him the putt?” one of them ribbed me.  (It was cold, rainy, and we were playing our typical match, and I was down a few holes.)  Then they offered us their heated golf carts for the remainder of the round as they had decided it was just too cold and wet to play.  Although by that time we were used to the conditions and declined, we were more than impressed with the kindness of strangers.

Obviously, all the peripheral amenities at Bulls Bay are well in place, but the star of the show is the golf course, which opened in 2002 and was the last original design of architect Mike Strantz before he passed away in 2005 at the age of 50.  In keeping with the Strantz signature, Bulls Bay has a radically different look from most other golf courses, featuring 18 holes that are as imaginative and artistic as any I’ve encountered in my dozen years of golf.  Yet whereas other Strantz courses present severe and, some would say, “wild” routings -- Tobacco Road near Pinehurst and Tot Hill Farm in the Asheboro, NC, area come to mind -- Bulls Bay is more restrained though no less spectacular.  And hole-to-hole, it may be the most harmonious layout in the architect’s small, but distinctive, portfolio of designs. 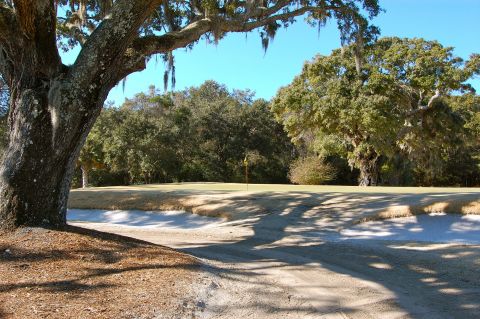 The green at the par 3 3rd hole at Bulls Bay.

The first hole is a perfect introduction to the style of the golf course.  A 465-yard par 4 from the back “Maverick” tees (rating 75.2, slope 135), the fairway is nearly 100 yards wide but plays smaller due to a lone tree that looms about 100 yards short of the green on the right.  The best line off the tee is to the right half of the fairway, but venturing too far right could cause the sprawling live oak to affect the approach shot.  Conversely, hitting a tee shot well out to the left lengthens the hole considerably and yields a more awkward angle of approach to the green.  Such conundrums abound at Bulls Bay and make for a round that can be at times exhilarating and at others maddening.

Strantz will never be confused with Donald Ross, but at Bulls Bay at least, his wide fairways are virtues -– easily reached yet demanding appropriate positioning to set up fair approaches to the challenging green complexes.  From the diminutive first green to the enormous, heaving 11th, the greens and green complexes at Bulls Bay present an enormous variety of slopes and options.  The first green is the smallest and the flattest, but that makes sense as it eases the player into the round.  The 11th green, by contrast, is more than 60 yards deep with an enormous ridge running through it.  Many other putting surfaces contain contours that can be used to maneuver the ball around from on and off the green.  I found myself thinking repeatedly, “I could spend an hour hitting putts and chip and pitch shots on and around this green.”  I don’t think that at many golf courses, but at Bulls Bay, it was nearly an every-hole occurrence.

All in all, I would consider Bulls Bay to be in the very top tier of golf courses I have played, along with the Old Course at St. Andrews, Sunningdale, Pinehurst No. 2, Palmetto Golf Club (Aiken, SC), Yale, Shelter Harbor Golf Club (Charlestown, RI) and Newport Country Club.  Bulls Bay deserves to be in such company.

[Editor’s note:  As a member of the South Carolina Golf Rating Panel, I was invited to play the otherwise private Bulls Bay and brought along my son Tim, an unabashed fan of architect Mike Strantz.  I echo Tim’s comments in his review, and would add that Bulls Bay is a great course to grow old on, by which I mean the fairways are so wide that a position player, as opposed to a long hitter, can have a most enjoyable round time and again.  Even from the penultimate blue (“Skull”) tees at nearly 6,700 yards, the rating is a fair 71.6 and the slope a mere 125.  And even a 70-something golfer in reasonably good shape should have no problem negotiating the white, or “Bull,” tees at 6,100 yards, a 69.1 rating and 120 slope.  Membership initiation fee at Bulls Bay for Charleston area locals is $75,000; national membership is $50,000.  Both “deposits” are refundable under certain conditions; see the Bulls Bay web site for details. http://www.bullsbaygolf.com.  Home sites adjacent to the course are priced from the high $200s. --  Larry Gavrich] 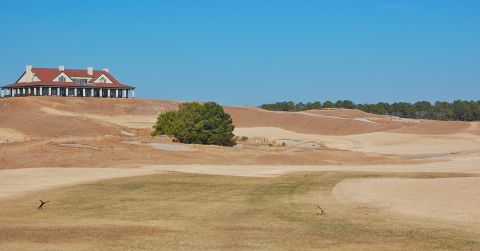 The home hole on the front nine, a par four dogleg left, sweeps up toward the clubhouse.  The high bank behind the green encourages a strong approach shot, literally.

More in this category: « Clarifying building costs on Daufuskie Extreme bargain-priced golf properties may signal market bottom south of Myrtle Beach »
back to top
Back to Top