Rock solid: Boston course in quarry takes everything for granite
Friday, May 15, 2009

Rock solid: Boston course in quarry takes everything for granite 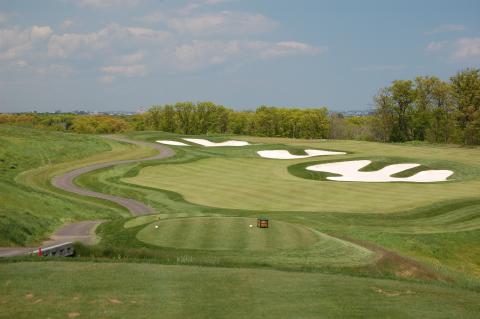 The 5th on the Milton nine at Granite Links is a beautiful short par 4 that dares you to take the short way home between the second and third bunkers.  A well struck shot is rewarded with a wedge to the green.

"They aren't making any more land."  You hear that adage all the time as a justification by real estate people to buy, buy, buy.  But it is not strictly true.  Across the nation, new land is being created all the time atop former garbage dumps filled to capacity and "capped" to seal the bad stuff and smells below the surface.  Because the landfills contain tons of natural composting material, it is almost impossible not to grow great grass on the reclaimed land for such purposes as housing developments, parks, golf courses or a combination of them all.
Although many golf courses are in the dumps figuratively, others appear to be doing well.  For example, New Jersey's Liberty National Golf Club on New York Harbor features knockout views of the Statue of Liberty and New York City's entire West Side.  Its initiation fee of $500,000 and planned

multi-million dollar homes ensure that only a wealthy few will be aiming their shots toward Lady Liberty's torch.  A few miles south of the Jersey City club, in Bayonne, NJ, the Bayonne Golf Club was built for an eye-popping $130 million, also on a landfill.  Bayonne, long the butt of comedians' jokes for its déclassé shabbiness, now can claim a private golf club with member fees of $200,000.  Who's laughing now?
On Wednesday, I played another course built atop a pile of gunk, Granite Links in Quincy, MA, just six miles from the center of Boston and available for play to anyone willing to pony up $125 green fees.  Is it worth it?  The answer is yes, unless you deduct a lot for a few wacky holes on an otherwise interesting and often dramatic layout.


Big Dig to the rescue

The story behind the 27 holes at Granite Links is as quirky as the layout.  The course was built on the site of a former granite quarry whose stone helped build American cities in the 1800s; indeed, the nation's first commercial railroad started in Qunicy to bring granite from the town's quarries to Boston for construction of the Bunker Hill Monument.  Later, the quarry at Granite Links would serve another purpose, as a major landfill for the garbage of Boston and the surrounding areas.  Eventually, though, like all landfills, the Rail Quarry, as it was known, could contain no more garbage.  Tons of soil and other natural material were needed to "cap" (or seal) the landfill.
Fortunately, the largest city construction project in history was just six miles away.  The decades-long and widely criticized $20 billion project, known as the Big Dig, is rerouting city roadways underground to relieve choking congestion and pollution in the city.  Of the project,

Massachusetts Congressman Barney Frank once said it would have been cheaper to raise the entire city than to lower the roads.  One side benefit to the controversial project was that all the Boston blue clay and other deposits gouged from the tunnel needed to be dumped somewhere.  Necessity and creativity merged at the old Rail Quarry in Quincy, just six miles from the city and where developers and town fathers were trying to figure out what to do with the site.  Some 900,000 truckloads of Boston's underground were sent to the quarry.
Garbage and Big Dig detritus were not the only Boston produce dumped in the quarry.  Over decades, the deep granite pools at the base of the sheer cliffs provided a convenient and out-of-the-way dumping ground for people local mobsters wanted to "disappear." During the construction of the course, engineers discovered dozens of old vehicles at the bottoms of the lakes.  After putting on Granite Links' contoured greens, one online wag wrote, "they must have buried the cars under there."  After trying in vain to get the ball close to pins at Granite Links, the word "murder" does come to mind.


A tomb with a view

As cemeteries go, the dearly departed could not ask for better eternal views than from Granite Links.  At just 300 feet, the course is the highest point in Quincy, which doesn't sound like much; but everything else, including Boston Harbor, is at around sea level.  From many holes on the swirling, up and down layout, the city skyline spreads before you, visible in all but the foggiest conditions since Boston is a mere 12-minute drive, assuming no traffic (you can never assume that in Boston).  First timers at Granite Links will have trouble finding an aiming line off the tee boxes on the many blind drives, but others have noted they use Boston's famous John Hancock Building as reference point.
When the course routing turns away from the city, the views are no less impressive. The 7000-acre Blue Hills Reservation runs along more than half the circumference of the course and provides an uninterrupted expanse of green forestland.  The Reservation, which features more than 100 miles of walking trails, will never be developed.
The 27 holes by Jupiter, FL-based architect John Sanford, the only Massachusetts course ranked in the top 100 "courses you can play" by Golf Digest magazine, are configured as three 18-hole

combinations -- the Quincy and Granite, the Milton and Quincy, and the Granite and Milton (although we played the Milton first, and then the Granite).  At its longest, the Milton/Granite course plays to 6,818 yards, a rating of 73.4 and a slope rating of 141.  Slope ratings on the other combinations are slightly lower, although the course rating on Quincy/Milton is the highest at 73.9.  All the nines at Granite Links play shorter than their yardages because most of the tee boxes are elevated -- some quite so.

My friend Pete Blais, editor of BoomerGolfNews.com, and I opted for the penultimate "blue" tees at a distance of 6,300.  The #1 tee on the Milton provides great expectations for the day, with a driving area that looks down to a sweeping fairway that tilts and turns toward the green off the right 454 yards in the distance.  It is a fair, if intimidating starter.  Other highlights on the Milton course included two well-designed par 3s; the 2nd forced a left to right shot to avoid the large bunkers guarding the right rear pin.  Our group hit good tee shots but only one stayed pin high, the rest rolling to the rear of the firm green.  The 6th does not warrant as much finesse with a wide opening to most of the green, bracketed by two good-sized bunkers.  But at 188 yards from our tees - and a robust 219 from the rear, it was not pushover either.  The Milton nine played at a slightly lower elevation than the Granite and, for that reason, was protected from some of the blustery winds coming off the harbor.  For that reason, the Granite played a few strokes tougher.
At just 364 yards, the 5th on Milton reminded me of many short Tom Fazio designed par 4s, with large cloverleaf bunkers screaming, "Go ahead, I dare you to take the short cut."  But with a strong breeze from behind, a few of us took the dare and one lofted one over the farthest left hand bunker to nine-iron range from the fairway.  Behind the green and slightly below a ridge lay our first direct glimpse of the city beyond.  The finishing hole on Milton is the most challenging drive of the nine, with a raised fairway that moves left at the top of a deep grass hill.  The middle of the fairway appears to be reachable from the tee, but in reality, it is foolish on the short par 5 to attempt it.  The proper play is straight out to the right side of the fairway, from where a routine par is quite achievable with a simple third shot into the large green, the entire skyline of Boston covering the vista beyond. 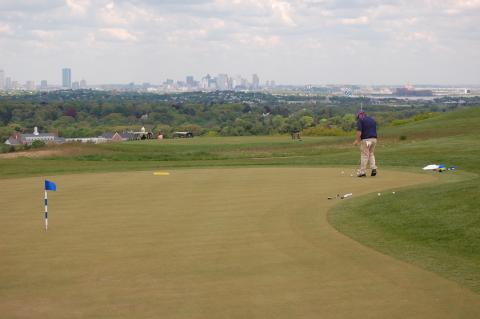 It is tough to keep your head down on the practice green at Granite Links, such are the views of Boston beyond.

More in this category: « Golf on the rocks in Quincy, MA: Review of Granite Links (part two) Golf Review: Piney Branch, Hampstead, MD »
back to top
Back to Top