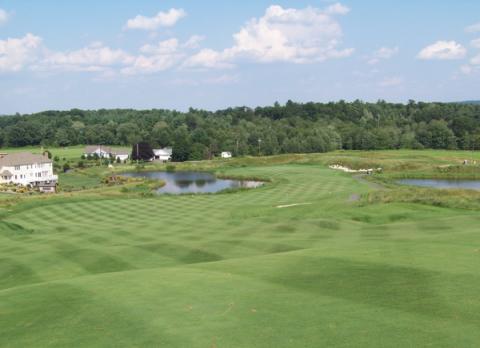 
by Tim Gavrich
Regional golf magazines and online discussion groups have touted The Ranch Golf Club as one of that state's best public courses since its opening in 2001.  The course, which draws players from the Springfield (MA) and Hartford (CT) areas, lives up to the hype with an assortment of holes that focus the player's attention throughout the round, tons of visual drama, and a high level of playability and challenge for golfers of all abilities (as long as they play from the correct set of tees).  The course was designed by Damian Pascuzzo, one of only two of his courses outside of California and Oregon (the other being the private Indian Pond Country Club in Kingston, MA).
The fairways at The Ranch are generally wide, a help for the higher handicap players, but there are distinct advantages and disadvantages to approaching the greens from one side of the fairway or the other.  Often, the

best angle into a green at The Ranch is from the side of a fairway closest to an imposing bunker or hazard -- a thoughtful way to balance reward with risk.  The greens at The Ranch are large and undulating, providing many possible pin positions and a different golf experience day to day.  The contours on many of the greens can be used to bank a shot from one point to another, and the green complexes at The Ranch reward creativity and thoughtful placement of the approach shot.
The bunkering contributes much to the natural look of The Ranch.  Unlike Tom Fazio's clean-cut, many-fingered bunkers, the sandy hazards at The Ranch have ragged edges and are often scooped out of fescue-laden hills.  On the mean, they are not terribly deep (with a few exceptions), but getting out is only part of the battle as many of the greens run away from the bunkers.  Also, by permitting the fescue edges to grow long, The Ranch penalizes stray shots severely; a ball may sometimes stay in the rough and settle into a lie that leaves the player wishing he were in the sand instead.
Fun may be The Ranch's most important element.  It is one of the most pleasurable golf courses I have

I hit the longest drive of my life, 425 yards straight downhill.
played, and one hole, the 16th, is the most thrilling hole of all.  From the black tees, the aptly named "Ski Hill" is 618 yards (579 from the Blue, 532 from the Gray, 500 from the Gold), but to say it plays shorter than the scorecard indicates would be a major understatement.  The 16th tumbles sharply downhill, with the upper tee box at least 150 feet above the green.  It has the potential to yield the longest drive of any player's life, but also one of the worst.  It is critical to position the tee shot just left of the tree line to the right of the fairway.  If you miss too far left off the tee, chances of finding the ball are scarce, as it is likely to bound off into the woods.
When I played the course on August 18, I made a good swing from the 618-yard tee box and sent the ball down the right side of the fairway.  My ball finished 190 yards from the green.  The approximately 425-yard effort is the longest drive I have ever hit, longer by about 70 yards than my best on the dried out links courses of Scotland.  I concede that the drive's final 150 yards were due to the massive elevation drop, but it is still an exhilarating golfing moment to have a mid iron second shot on a 600+ yard hole.
The 16th has a slightly less dramatic sister in the 9th.  It tumbles down a good portion of the same hill, but registers at "only" 540 yards from the Black tees.  It forces the player to make a tough decision after a good drive -- challenge the wetlands short of the green for an eagle chance, lay up short of the wetlands, or hit out over a narrower portion of the wetlands in order to approach the green from the left.
The Ranch is not a perfect golf course by any stretch.  However, its weaknesses are modest.  The biggest noticeable problem is that the fescue is very thick, in some places excessively so, making it difficult to find one's ball, especially after a blind shot.  This will frustrate a player struggling off the tee.  Also, for those who like to carry or drag their bags, The Ranch is a very difficult walk, with some long journeys from green to tee.  (The golf carts have GPS systems, a big help for the first-time player at The Ranch.)  Green fees are somewhat intimidating, with peak rates $100 to $110 from late spring through mid-fall.  However, my friend and I took advantage of the after 2 p.m. rate of $70, worth absolutely every penny.
All in all, The Ranch lives up to its billing as a well-regarded public golf course.  It presents a great variety of holes and shots that will challenge and intrigue golfers of all skill levels.  Although it is expensive, it is a delightful indulgence that makes you look forward to your next day back at The Ranch. 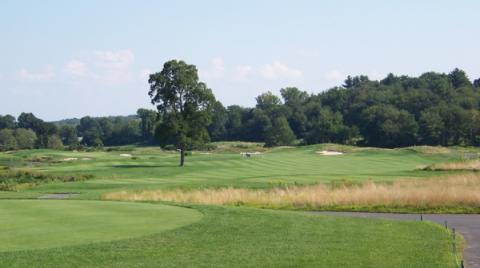 The first hole at The Ranch takes the long way around a lake, but big hitters may be tempted to fly the lake and go for the green in two.

More in this category: « Southernmost Myrtle Beach course on the way back Fangs for the memories: Diamond Back the right antidote for golfing slump »
back to top
Back to Top