Dye for a dollar is big deal 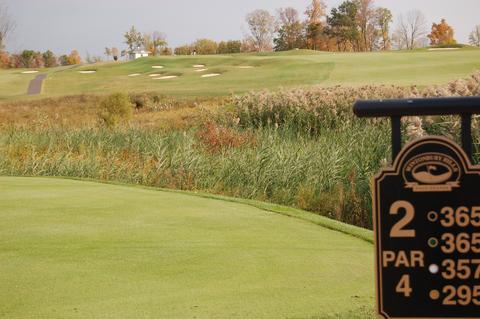 Five years ago, Pete Dye donated his design services for the town of Bloomfield, CT's Wintonbury Hills golf course for $1, or an estimated three million less than Tiger will get for his first American design for The Cliffs Communities.  Bloomfield got a great deal.
Yesterday I played Wintonbury Hills, which is located about eight miles northwest of Hartford, with Ken, Joe and Bernie.  Ken is a HomeOnTheCourse Community Guide subscriber and Joe and Bernie were taking a day off from their management positions at the local Coca Cola Bottling office.  They chose a great, sunny day, with temperatures in the high 60s (F) and the course in very nice shape.  I have played Wintonbury a number of times, and I expected the fairways and greens to be extremely firm, forcing many bump and run shots to greens with pin positions at front.  The course ran true to form yesterday.  Shots at the pin just would not hold, and 20 foot putts or chips through fringe were preferable to 40 foot putts from the back of Dye's undulating greens (Tim Liddy, gets co-design credit on the scorecard).
Ken was right on when he described Wintonbury as a course that "looks like parkland but plays like links."
Indeed, from the clubhouse, the views are wide open to fairways and large greens in the distance, and it does affect a links land feel.  But once you reach the edges of the course, the holes thread through trees and around a few ponds and marshland hazards.

The course features 125 bunkers and firm, medium fast greens.
The course is not long, measuring less than 6,700 yards from the tips and less than 6,300 from the tees we played, but when the wind blows, as it did yesterday, the course's genial ratings and slopes can seem a tad conservative, especially with pins just behind a number of false fronts.  Although few of the 125 bunkers are in play for the better golfer off the tee, those around the green are well placed and built into hillsides.  With its firm footing and small, angled bunkers, Wintonbury is not a bad tuneup for a trip to the Old Sod.
The course is not without its quirks, which keep it from rating an overall otustanding (I rate the course a 7 on a scale of 1 to 10).  Among the idiosyncrasies are two sets of holes - 1 and 10, and 2 and 11 - that are nearly identical in design.  The opener is a straight on par four, with hazard stakes fronting the marsh well to the left and bunkers guarding the slightly elevated green.  Ditto number 10.  The second is an uphill dogleg left, with most of the trouble on the left in the form of rough and trees before an uphill approach to another well guarded elevated green.  Number 11, which takes an identical routing up and left, adds a few pot bunkers at the crook of the dogleg and some bailout fairway to the left of the bunkers.  The better approach to the green is from top right since the green is blind from the fairway on the left.
The routine par 4 16th, which plays downhill to the green, seems self consciously "tricked up," as if the designers couldn't avoid making it short but wanted to make it much more difficult.  The huge mound guarding the front left half of the green is too close to the putting surface; with the pin just over it, as it was yesterday, there was no way for even a well-played short-iron shot from the center to the left side of the fairway to be rewarded with less than a 15 foot putt.
For those who need the practice range before a round of golf, Wintonbury Hills' is up the road, a little too far for a cart ride.  Compensation is in the practice green complex just behind the clubhouse, which includes a few sand traps as well as an undulating surface that previews the greens on the course.  Wintonbury also permits chipping to the practice green.
Despite the firm playing conditions, the turf was in nice shape for mid-fall, and clearly the grounds crew had preceded us with their leaf blowers and collectors.  We never came close to losing a ball in the leaves, not the case at many tree-lined courses in Connecticut.  Greens were not as fast as usual - they had not been cut that morning - but you still needed to be careful from above the hole (I'd estimate the stimpmeter reading at about 9).  A well-struck wedge shot typically bounded six to 10 feet beyond the slight dent it made in the putting surfaces.
Because of Dye's involvement and positive national publicity in the golfing mags, managers flying into the nearby Bradley Airport for corporate meetings in Hartford have been making detours to Wintonbury for a round of golf before their business discussions.  In the summer, tee times are necessary, but the Wintonbury web site makes it quite easy to book a time in advance (or you can call the pro-shop).
Wintonbury's clubhouse is small, but the pro shop is well stocked and the restaurant is first-class for a municipal/daily fee club, serving not only the excellent snack foods (hamburgers, hot dogs) you expect but also including some daily specials.  Green fees, with cart (GPS included), were just $60.  Memberships are available to town residents and non-residents alike, with annual dues (no initiation fees) beginning around $2,000 for residents for a weekday pass (unlimited play Monday thru Friday).  For a course of this quality, that is a bargain, almost as good a deal as getting Pete Dye to design the track for a buck.
Wintonbury Hills Golf Club, 206 Terry Plains Road, Bloomfield, CT.  (860) 242-1401.  Web:  www.wintonburyhillsgolf.com.  Tournament tees: 6,623 yards, rating 72.3, slope 130.  Back tees: 6,283 yards, rating 70.0, slope 128. 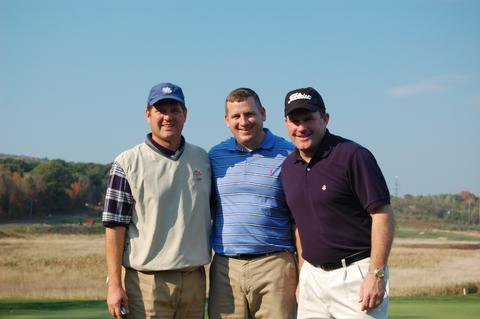 Left to right, Ken, Joe and Bernie were great company at Wintonbury Hills.

More in this category: « Golf Review: Piney Branch, Hampstead, MD My first five-putt on a course like few others »
back to top
Back to Top