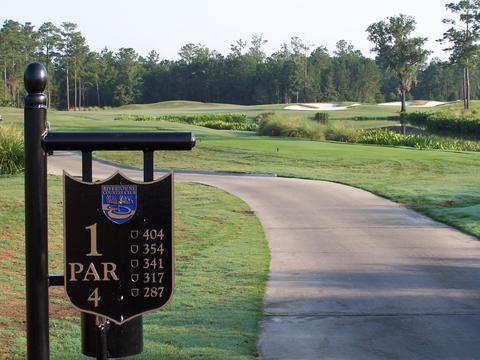 The 1st at Rivertowne is a wonderful starter, and a sign of things to come.  The safe play is left of the traps with something less than a driver.  But if you have warmed up on the range, you might want to take a flyer over the far trap, leaving less than 80 yards or so to the green.  Many drives at the Palmer designed course provide similar options.

Bobby Ginn and the organization that bears his name have a thing for South Carolina, apparently.  In recent years, they have developed Cobblestone Park in Columbia and incorporated the University of South Carolina golf course into the plan; and in Mt. Pleasant, just to the northeast of Charleston and adjacent to Isle of Palms, home to the popular Wild Dunes resort, Ginn has taken over the sprawling Rivertowne development and also bought the daily fee Patriots Point course, with scenic holes that play out along Charleston harbor.  To promote Rivertowne, Ginn convinced the LPGA to stage a tour event there and engaged Annika Sorenstam as the sponsor.  It seems to be working; in the current low-volume real estate market, big homes are sprouting in the community.

I played the Arnold Palmer designed Rivertowne yesterday, and although I am not a big fan of the King's layouts, this one was packed with interesting plays, especially from the tee boxes.  It didn't hurt that, in general, I struck my driver better than I had in months, but standing on the tees and noting the landing areas on the GPS systems in the cart, I didn't see much room for error.  Without the GPS, some of the blind drives over traps and mounding would have been annoying and frustrating.  But with the guidance system, I felt a little like a member in terms of where to aim. (We played the "Members" tees, which also helped us feel like members.)
The GPS, however, didn't help one of my three playing partners, who were all from the Knoxville, TN, area.  Jerry striped the ball a good 275, often with a sweeping hook that added distance on the firm fairways.  Many times we thought he had bombed one down the middle only to find that he had gone through the fairway and into the rough; a few times, we never found his ball.  At Rivertowne, unlike other courses I played in the Mt. Pleasant area this week, it is all about the first shots on most holes, not about the greens.  The pins at Rivertowne are quite approachable from most points on the fairways, and the putting surfaces are smooth and medium fast. I found them by far the easiest to read of the four courses I played in the area this week.
Jerry, along with his friend Wes and son Chad, a high school sophomore who would like in a few years to play on the University of Tennessee golf team, were in the area for a week's vacation with their families.  As indicated above, we played the "Members" tees which, at 6,267 yards, certainly didn't make for a long routing.  And it wasn't a difficult one either as long as you approached the greens from the fairways.  Shorter approach shots typically encountered bunkering in the fronts of the greens; longer holes sported green complexes that were more approachable.  The greens themselves were firm, with well-struck short irons rolling some six feet or more beyond their pitch marks.  On longer irons, you needed to play mostly to the front, no matter where the pin was.  Only on one hole was a putt from above the hole unstoppable at the hole, and that was on #5, where the pin was in a gully in the middle of the green, and our foursome was on the hills left and right of the pin.  None of us stopped the ball within three feet.
Rivertowne's greens fees top the $100 mark, which for the dead of summer in the area is pretty steep, two to 2 ½ times what the local competitors are charging.  But the competitors don't offer the GPS or the insulated boxes of iced-down towels at three of the tee boxes, a blessing on a day with 95-degree temperatures and no wind.  The pro shop and on-course staff combined friendliness with professionalism, a Ginn hallmark.  After my day before at Charleston National, where the service and accoutrements did not match the course layout, Rivertowne was quite a contrast.  Was it worth the relatively steep price?  I think so and look forward to a return visit.  Thanks to Wes, Jerry and Chad for their spirited play and fellowship.
I'll review fully the golf communities in the Mt. Pleasant area in a fall edition of HomeOnTheCourse.  Sign up now to begin your annual subscription with the August issue, which features golfing communities in the Williamsburg, VA, area. 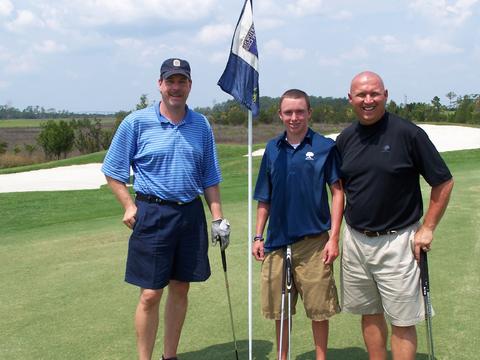 Left to right, Wes, Chad and Jerry bore witness to my best nine holes of the year, a stellar 35 on the front nine (fairways and greens and head still on the putts were the secret).  Alas, it did not last, but I still broke 80...barely.

More in this category: « Raves for Caledonia totally deserved Devil in (lack of) details at Charleston National »
back to top
Back to Top