Devil in (lack of) details at Charleston National
Thursday, July 26, 2007

Devil in (lack of) details at Charleston National 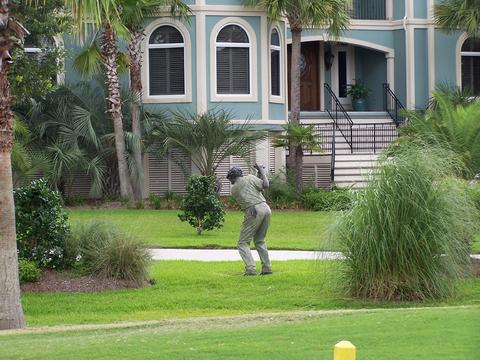 One golfer is a permanent fixture adjacent to the 16th tee at Charleston National.  He comes with the house that has breathtaking views of the marsh, the Intracoastal Waterway and the length of the 16th hole.  It is listed above $3 million.  If interested, let me know .

Charleston National, about 10 miles east of Charleston, SC, is a wonderful Rees Jones layout that winds its way through and around wide expanses of marsh.  I spent an engaging four hours on the course yesterday.  The layout reminded me of Haig Point on Daufuskie Island, another Jones designed course; that's a compliment to Charleston National.  At one point during the round, we drove from green to next tee over two long bridges with nothing but marsh on both sides.  The views were spectacular.

Charleston National winds its way through a natural zoo of sorts.  Scores of snowy egrets roosting in trees next to one tee box made such a consistent racket that it did not affect concentration.  Signs around the course warned that looking for balls in the 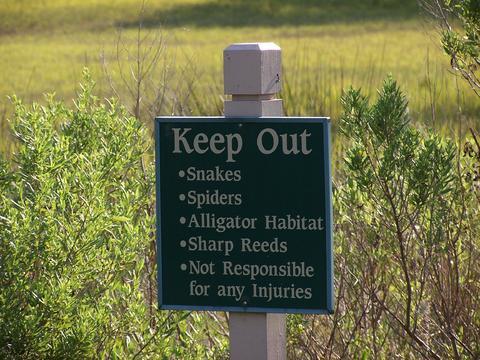 wet stuff might not sit well with the local residents (not the homeowners, but rather the snakes and alligators).
Add to the experience my match-up with Mike, Bill and Jack down from the Myrtle Beach area for the day, which only made the four hours more enjoyable.  They are great comrades, clearly, since no one was offended by the constant and aggressive ribbing the gave each other, and two-foot putts they didn't give each other.  It had been a long time since I last heard the expression, "A lot of chicken left on that bone" to describe a putt of three or four feet.  Yesterday I heard it multiple times.  It sounded good.
All in all, it was a near perfect day, tainted only by a few bad swings off the tee - well okay, maybe more than a "few" - and some silly missteps by the management of Charleston National.  Forget that we were not offered towels to take along with us to mop up on a 90+ degree day.  The towels have become basic at high-end daily fee courses, which Charleston National has the potential to be.  What really took the cake was the scorecard.  It wasn't until the fourth hole that we realized the scorecard was 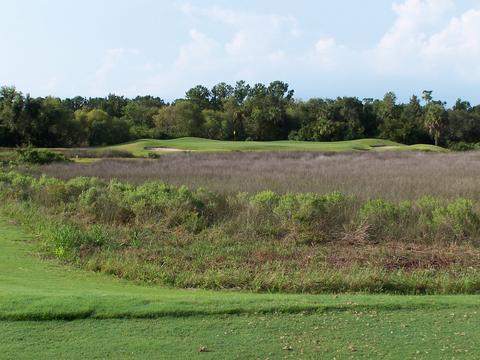 backwards, that we were playing the front nine - according to the nice granite markers at each tee box -- but the layouts and distances on the scorecard were for the back nine.  Neither the young man who took our reasonable greens fees ($46) in the pro shop nor the starter who took our receipts on the way to the first hole mentioned a thing.  After the round we asked the starter, who clearly didn't think it was his responsibility to alert us, what the story was.  "Oh," he said, "they ran out of scorecards and decided to use the old ones [from before the nines were switched]."
I found out later from a real estate contact in the area that the owner of the club is a skinflint.  He switched the nines earlier to cut staff in a snack shack out where the original nine ended.  Now, golfers wanting a candy bar or hot dog and drink after #9 trudge up a long flight of stairs to the grille.  The former front nine ended with a par 3; now the finisher is the par 3.  If you are like me, you don't much care to finish on a hole where you have slim chances to save a round with a birdie.  I doubt Rees Jones was consulted.
Oh well, maybe management will wake up, spend a little to make a little more, and match the service to the quality of the golf course, which was in good shape.  To Mike, Bill and Jack, thanks for letting me tag along.
Note:  The area just northeast of Charleston, a wonderful and historic southern city, is rich in golf course communities, including Rivertowne (Arnold Palmer), Dunes West (Arthur Hills), Snee Farm (George Cobb) and the Wild Dunes Resort (Tom Fazio).  I'll report on the golf lifestyle in the area of Mt. Pleasant, SC, as well as the real estate options there in an upcoming issue of our HomeOnTheCourse community guide.  The latest issue (August), dedicated to the communities in the Williamsburg, VA, area, will be available next week.  Don't miss an issue.  Subscribe now . 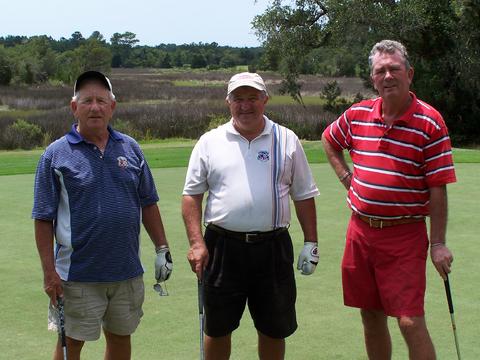 Left to right, Mike, Jack and Bill from Myrtle Beach were great company at Charleston National.  When I asked Bill to try one photo without his hat on, he bragged that he had earned the "Best Hair in Myrtle Beach" title in the late '90s.  I believe it.