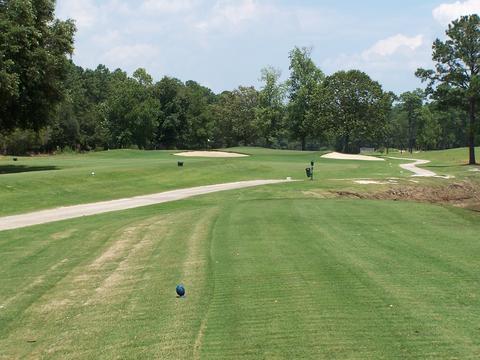 Par 3s at Wedgefield are not a strong point of the design, but on the 13th, a well-placed pin can provide plenty of challenge from the tee.

Wedgefield Plantation Country Club is a daily-fee golf course located two miles from Highway 701 in Georgetown, SC.  It is the southernmost golf course on the famed Myrtle Beach Grand Strand.  Designed by Porter Gibson, Wedgefield opened in the early ‘70s on the site of an 18th Century rice plantation.  The final green sits in front of the old manor house, which was recently refurbished and began serving lunch and dinner.  My rating scale is 1 (for repulsive) to 10 (incomparable).

Golf Course Setting: 6 ~~ Wedgefield was laid out on the site of a former rice plantation, so don't expect rolling hills -- the terrain is almost completely flat.  However, twisted, Spanish moss-laden oak trees frame many of the holes, as well as the pleasant entryway onto the grounds (there is plenty of shade in the parking lot, and it was quite a relief not to return to a steaming hot car).  There are a few ponds and streams placed in interesting spots throughout the course as well.  The only good long-range view to speak of comes at the back of the penultimate green, where the trees open up to reveal the expansive marshland to the immediate north.

Golf Course Conditions: 8 ~~ Wedgefield was in excellent shape, especially in view of the considerable drought that has overcome the Low Country in the last two months.  Fairways and roughs were quite lush, with a few brown areas here and there and only a few bare spots.  The greens, though a little slow for our liking, putted quite well and had very good grass cover.  To my delight, the course is not over watered.  Rather, the greens keeping staff maintains firm and fast conditions tee-to-green (sluggish greens notwithstanding), instead of pursuing obsessively the verdant green hue that most softer courses strive for and that is irrelevant to playing conditions.  Still, well struck irons stopped a foot or two beyond their pitch marks.

Quality of Green Complexes: 5 ~~The greens and surrounding areas at Wedgefield are decent, though not terribly compelling.  Most greens had a modest amount of undulation that made putting a challenge at times.  However, the contours were not terribly bold or "fun."  Most greens were guarded by a bunker or two (two greens boast three bunkers, and the large 5th green is protected by four).  The bunkers are not very deep, and most are set a few paces from the putting surfaces (this is due either to the greens having shrunk over the years, or just a conservative attitude by the architect).  The most compelling 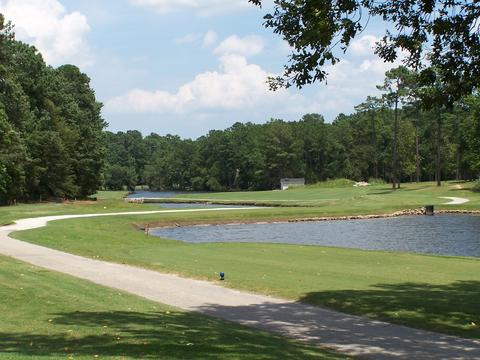 The par 4 14th at Wedgefield provides split fairway.  The safe play is with a long iron or short wood right of the far water.  Over the trees and left of the water is daring, but a well struck ball leaves a relatively short approach.

green complex is at the end of the short par 5 10th hole, where a wide landing area gives the golfer ample opportunity to try to negotiate the greenside bunkers in order to reach the putting surface in two shots.  There is also about 10 yards of grass maintained at fairway height at the back of the green, allowing for a decent variety of possible shots.  However, this green is the exception to the rather mundane green areas at Wedgefield.

Quality of Par 3s: 4 ~~The par 3s at Wedgefield are quite mediocre, with almost no variation among them.  From the rearmost tees, they play from between 203 and 217 yards.  Had it not been for a downwind breeze on the 13th hole, I would have hit the same club on all four holes, which is a terrible waste of an opportunity by the architect to challenge the player's creativity (and his own).  If pressed I would say that the 13th is best among them, owing to its more challenging green complex, with traps guarding both sides.  Overall, however, the par 3s at Wedgefield are sadly uninspiring.

Quality of Par 4s: 6 ~~ The two-shotters at Wedgefield are certainly better than the one-shotters, but they are still less varied and interesting than at Wedgefield's rivals a few miles to the north (such as Caledonia, True Blue and Pawleys Plantation).  Thankfully, there are no forced lay-ups to speak of, except for the 14th hole.   The Club touts it as the "signature" hole, but it is in fact a failed attempt at a risk-reward as the low-handicap player cannot carry from the back tees the tall pine trees guarding the corner (However, it is worth the risk from the more forward tees).  Wedgefield lacks a compelling short par four, but offers a few decent longer "half-par" two-shotters, such as the 440 yard 5th hole and the 455 yard 12th hole.  These two were my favorite par fours on the course, as their length, mostly, posed the greatest challenges.  The rest of the par fours are all between approximately 375 and 435 yards long and are not terribly varied.

Quality of Par 5s: 7 ~~ The par 5s are Wedgefield's strongest holes.  The golf course begins with an interesting par 5 that requires an uncommonly accurate second shot to negotiate a beautiful live oak at the dogleg's right corner.  A successful shot leaves a wedge approach shot.  The other long holes allow the golfer to play aggressively in order to have any eagle chances.  A drive in the fairway on the 17th hole means that the player is left with a very attractive shot through a chute of high wetland reeds to a large green with the wide marsh in the background (see photo accompanying yesterday's posting).  The remaining par 5s -- holes 4 and 10 -- offer two more interesting chances to gain ground on par.

Routing of Golf Course/A Good Walk?: 6 ~~ Wedgefield is not as spread out as most real estate-based Low Country golf courses, but some lengthy green-to-tee journeys would make the course a tough walk on a hot South Carolina day.  Also, despite the abundance of live oaks, many holes have such wide playing corridors that shade is extremely difficult to find, even on the cart paths.

Overall Rating: 6 ~~ Wedgefield, which provides five sets of tees, is a throwback to the early days of Myrtle Beach area golf.  Although its layout can be a little mundane at times, there are enough holes of interest -- especially the par 5s -- to make for an entertaining round.  And with summer greens fees below the $50 rate, longtime visitors to the area certainly will feel as if they are back in the 1970s.  It is good to see the owners making welcome investments in improving the course and facilities, and I look forward to returning in a year of two to give Wedgefield another try. 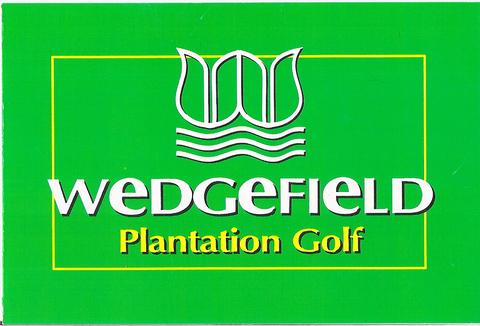 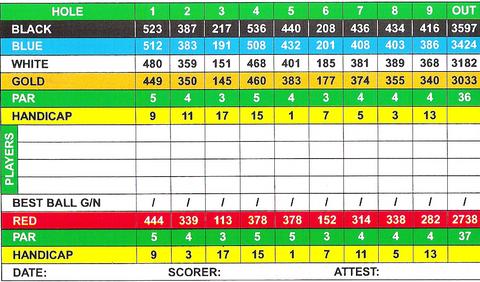 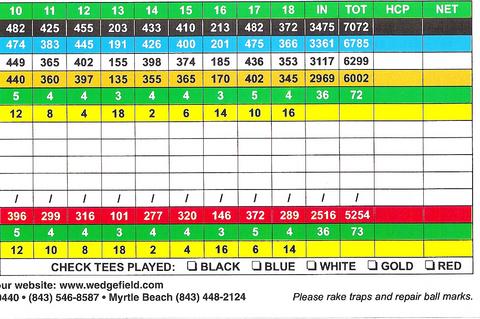 More in this category: « Review: Coosaw Creek Country Club, North Charleston, SC Southernmost Myrtle Beach course on the way back »
back to top
Back to Top