Love not all you need at Chapel Hill community
Friday, June 29, 2007

Love not all you need at Chapel Hill community

You'll need to warm up on the irons-only practice range before you tackle the golf course at The Preserve at Jordan Lake near Chapel Hill, NC.  The Davis Love III course is a stiff challenge, right from its opening hole.  A short par 5 at just 492 from the men's tees (512 from the back), it is one of the toughest starters I have played, with a fairway that slopes severely left toward a creek and marsh area and then forces a second shot that must carry the same creek as it meanders across the fairway (and you better hit a power draw to position for a reasonable third shot).  The pin on the elevated green was rear right, behind a menacing trap.  We prefer our warm-up holes a tad less penal. 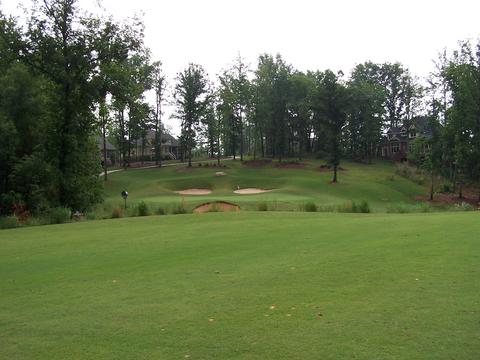 Later, have a Power Bar or two at the turn, because you'll need the energy on the par four 10th.  A dogleg right, it plays 438 from the men's tees (470 from the back) over a stream, with a trap guarding the inside elbow at 222 yards out from the tee box.  If you are fortunate to have hit a 250-yard drive down the left side of the fairway, only 180 yards or so remains to carry the stream that guards the front of the long, deep green.  That is a big "if," since the dog's leg is narrowest where good drives should wind up.  We won't easily forget number 14 either, a 500-yard par 5 that dares you to carry a long second shot (or short-iron third) to pin positions set beyond 30 feet of false front.  "False" is putting it mildly, since the front goes almost straight up.  We wondered if they throw a rope around the guy who cuts the green to keep him from tipping over.
Players with handicaps of 13 or more shouldn't go near the men's tees (rating 72.7 and slope of 140), and many will suffer frustrations from the shorter tees (6,116 yards with a rating of 70.6 and slope of 128).  As for the tips at 7,100 yards (75.1 and 145), the scorecard recommends that routing for handicaps of 6 or less.   The 6-handicap may be a 10 after a few rounds at The Preserve.
The community that surrounds the course has grown quickly since properties were first sold in 2002, the same year its golf course opened.  Lots average ½ acre, although some top one acre, with prices generally running from $150,000.  The developers maintain a list of four "preferred" builders who account for more than 90% of the homes built to date.  The Preserve is not gated and, for the time being, anyone can play the "semi-private" course by calling for a tee time.
The Preserve, which has no townhouses or condos, has a neighborhood feel to it.  Landscaping throughout is well maintained by the residents who are an equal mix of young professionals and "empty nesters," age 55 and older.  However, if you have done your job of raising kids and would like to be in the company of adults-only in your new community, there may be better options than The Preserve.  The young adults have produced a significant number of offspring.
All the customary amenities are available on the property.  The fitness center is modern but small; more than the current two tennis courts may be needed at full build out.  For water aficionados, Jordan Lake is close, but we did not have a peek at it as we made our way around the golf course.
The Preserve, which seems out in the country, is 30 minutes from mall shopping and 15 minutes from a supermarket and pharmacy, but commerce is coming closer every day; a few miles down NC Highway 64, the big handyman chains Lowes and Home Depot are both putting up stores.  The University of North Carolina Hospital is just 20 minutes away.
The Preserve at Jordan Lake is more like The Preserve Near Jordan Lake; the lake is actually across the road from the entrance to the community.  Nevertheless, the community is finding its audience. 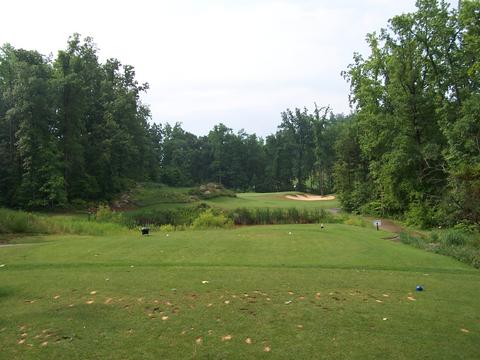 The Preserve course is tough enough without pins tucked behind bunkers.

More in this category: « Review of Vista Links, Buena Vista, VA Of unique communities, Mountain Air is up there »
back to top
Back to Top