I spent a very pleasant five days at a friend’s huge rented home on the beach at Kill Devil Hills, NC, on the Outer Banks, known locally to all as the OBX. (All residents’ license plates appear to begin with the letters OBX.) Kill Devil Hills is famous as the launching pad for the Wright Brothers’ first flight. I visited the Memorial to the events of December 17, 1903, just a mile from where we were staying, and it was a brief but impressive look at the dawn of aviation. Stone markers denote the distances of the flights on that fateful December day in 1903, a few dozen feet for the first three and then one giant glide for mankind on the fourth attempt, just over 850 feet in 59 seconds. A large granite monument atop the highest hill on the Outer Banks looks down on what was once a sandy runway and is now totally grassed over. 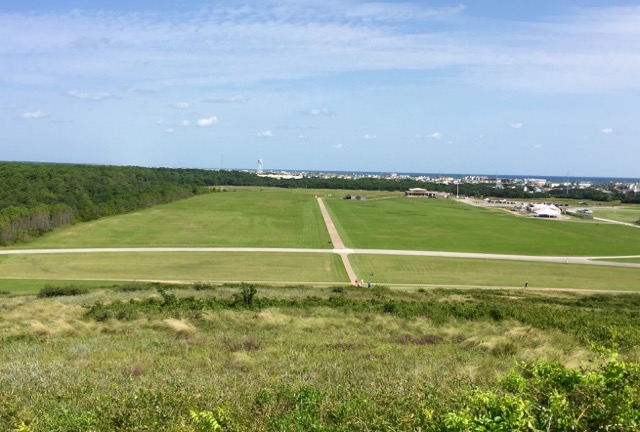 On December 17, 1903, the Wright Brothers flew a plane for nearly one minute at a distance of 852 feet, in the field below. It was a field of sand at the time.
The OBX attracts vacationers for much more than its history. The beaches stretch many miles along the Atlantic, and Kill Devil Hills, Kitty Hawk, Nags Head, Duck and the other towns that dot the banks exhibit all the perquisites of beach resorts, such as many seafood restaurants and other entertainment venues. (My most notable culinary find of the week was at Duck Donuts, a local chain that makes hot donuts all day long and dips them in whatever sugar component you’d like; the maple bacon donuts were terrific). During the rest of the day, the main attraction is the beach. The children in the Carolinas had just returned to school before our week and not every home seemed to be rented at ocean side and traffic was quite manageable, unlike just a week earlier. 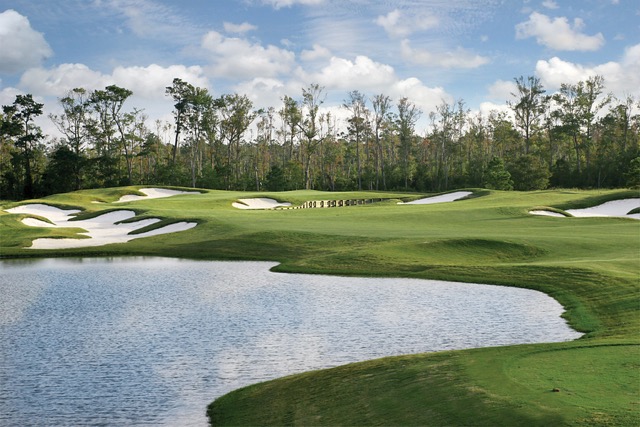 The shorter the par 4 at Kilmarlic, the more trouble surrounds the hole. (#3 shown here)
The Outer Banks is not especially noted for its golf courses, although it is certainly not lacking. Seascape, a course I played for the first and only time in 1971, once sported unimpeded views to the ocean from its perch up on the dunes, but today homes impede those views and the course conditions are less than optimal. The Currituck Club, surrounded by single-family homes and condos, offers some nice views of the Atlantic and a few good holes, but some complain about the price of green fees outstripping the quality of the experience. I and a few of my housemates for the week played at Kilmarlic Golf Club, a course just 20 minutes from Kill Devil Hills; it was in splendid condition except for the pockmarks on the greens that are the bane of resort-area courses. (Interloper players, with no vested interest in the future of the golf course, tend not to make the honorable effort to repair their pitch marks.) Kilmarlic, which I first visited nearly seven years ago (see review here), has seen some significant growth in the number of homes at its perimeter, none of which encroach on the layout. The course, which plays host to a major collegiate golf event every year, was designed by Tom Steele, not a noted architect but one who put together a noteworthy routing that is both fair to the average golfer but with enough in the way of challenges -– elevated greens, marshland surrounds, well-placed bunkers that hide the bottoms of pins -– to give pause to the single-digit handicap player. 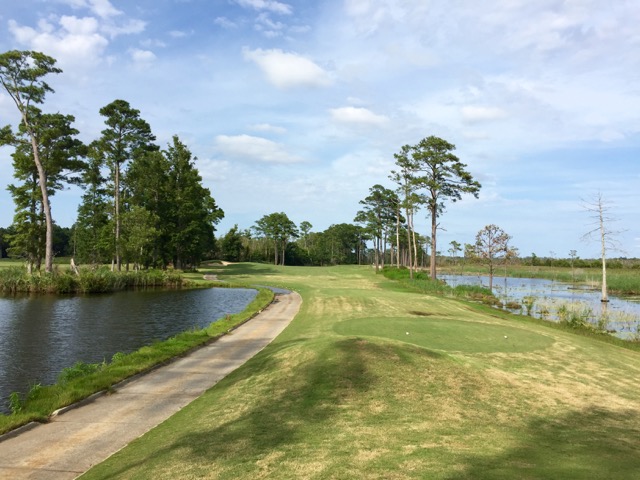 Kilmarlic may be a few miles from the beach, but there is plenty of water on the course, some in play, some ornamental.
Just four miles over the bridge to Kitty Hawk, Kilmarlic and the town of Powell’s Point are well located away from the summer traffic yet within 10 to 15 minutes of the beaches. Although the community of Kilmarlic was developed separately from the golf course, it offers most of the amenities of any larger sized golf community. (The Kilmarlic neighborhood is 650 acres in size.) Homes start in the $400s, fairly priced especially for those looking for a year round vacation spot separated by a few miles from outstanding beaches.

More in this category: « #2 is #1: Pinehurst Area Courses Dominate North Carolina Rankings Developer website calls attention to lawsuit(s) »
back to top
Back to Top