Some golf designers consider themselves artists; suggest to them what to paint, and they are likely to walk away from their commissions. Founders at Secession, for example, the circa 1991 wonderful private golf club in the Lowcountry near Beaufort, SC, suggested to Pete Dye that the green on one hole was in a position way too difficult for even skilled players. Dye bolted and Bruce Devlin finished the course.

Sometimes, developers leave the architect with a blank canvas and no guidance. I appreciate the work of the designer Arthur Hills, for example, but there is no way that the developers of Colonial Heritage, a 55+ golf community in Williamsburg, VA, wanted Hills to build the kind of course he did in a community populated by senior citizens. It was one of the most brutal layouts I’ve played, with blind shots and forced carries of considerable length, unsuitable for both sexagenarians and younger public players. In cases where a prospective property owner plays such a course before she buys, the layout could send her and her husband to another golf development. 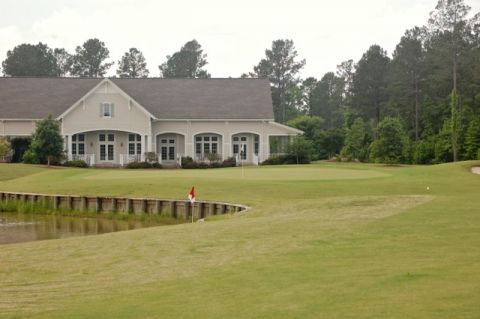 The 9th at Carolina Colours brings you back to the clubhouse...and one of the best "at the turn" burgers you will ever have.

I use the “she” pronoun purposefully because so many female spouses either come to a golf community already playing the game, or decide to take it up seriously as a way to meet new friends quickly and share quality time with their husbands. That is why more and more golf clubs are offering free lessons and other encouragements to new golfers.

The Carolina Colours golf course in New Bern, NC, was designed to appeal to virtually the full range of golfers, although the lowest single-digit players may find it a mild challenge at best, even from the tips at 7,000 yards, a rating of 72.9 and slope of 132 (especially until the firm fairways soften up in a year or two). I played well enough from the Green tees at 6,406 yards and 70.5/125 to shoot an 81, which is right on my handicap. Carolina Colours is very much a “Goldilocks” layout –- not too hard, not too easy, just right.

The semi-private Carolina Colours course is the product of Bill Love, a respected designer who served as president of the Golf Architects Association of America. Ken Kirkman, Carolina Colours’ developer, could easily receive co-credit for the design, since he carefully defined for Love

Most players will find the Carolina Colours golf course not too hard or too easy.
the type of golfer that he expected to play and hold membership at Carolina Colours –- 55 and older and a fair number of women -– as well as public players who wouldn’t want to spend more than four hours per round (many are active military from nearby bases). Love, more artist than artiste, clearly listened and produced a layout that takes advantage of the many stands of pines along the fairways that serve not only as visual alleyways to the greens but also as the only true “hazards” on some holes. Bunkers do come into play but, interestingly, they are either easily cleared or just beyond reach for the higher handicappers playing the shorter tees -- and very much in play for the big bangers. That was clever on Love’s part.

Designed to also make friends with the ladies

Carolina Colours is extremely friendly, but by no means a pushover, for female golfers. With not a single bunker in the middle of any fairway, those women who hit the ball straight, if not far, and avoid the few bunkers to one side of most holes, will be rewarded with clean lies at Carolina Colours and the opportunity to enter most greens with a high shot or a roll up. I counted only one forced carry for a tee shot from the ladies tees (4,913 yards, 63.8/102), and that carry was maybe 80 yards. At the par 3 16th, with a 30-yard wide stream in front of the green, the women’s tee box was at a right angle to the other tee boxes, with no carry over the water or the three bunkers at greenside. The only other water hazard seriously in play from the ladies tees is a stream 90 yards in front of the 405-yard par 5 3rd green, but a decent tee shot and well-placed second will leave an easy shot over the water and the possibility of a routine par (or better). The small group of women golfers I met at a Friday night members gathering at the clubhouse raved about the course, which opened in 2010. 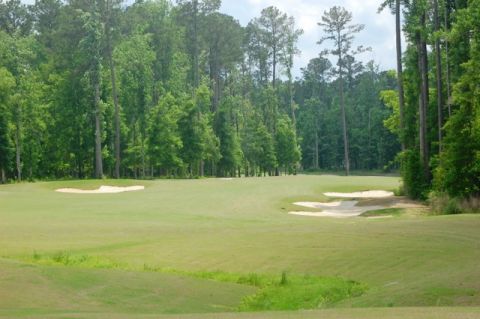 The 11th hole at Carolina Colours is one of the few in which fairway bunkers protect both sides of the fairway, and protect some errant shots from finding the pine woods.

This is an excellent time to play Carolina Colours for those who disdain housing within view of the fairways of a golf course. Because most of the homes at Carolina Colours are yet to be built, only a few are visible from the golf course. But even when fully built, says Kirkman, homes will be sited on only one side of each hole. And out-of-bounds stakes at the rear of properties will be reached only by the wildest of shots. Those who have played the fairways of Scotland links golf courses will take comfort in the current lies at Carolina Colours, which are tight with a firm underpinning (even after a hard rain the day before). The bent grass greens will seem familiar to other New Englanders as they were to me; after putting the previous two weeks on Bermuda hybrid greens, the greens at Carolina Colours were a homecoming, and I felt confident in both my reads and stroke.

Carolina Colours has active men’s and women’s golf associations that get together for play twice each week. Although residents certainly can pay green fees as they go, those who play at least a couple of times a week will find the reasonably priced memberships especially attractive. The club offers two basic golf membership plans for residents. The most elaborate plan is an equity membership with voting rights that carries an initiation fee of $8,000 and a mere $175 per month in dues per couple. The club also offers an annual membership for just $350 per couple, with dues of $190 per month. An interesting golf cart program priced at $1,975 annually for unlimited use also offers a second cart at no additional charge when they are available (if, for example, the members are hosting guests for a round). Those wishing to use their own golf carts on the course pay an annual “trail” fee of $1,200.

One of the great clichés in golf is, “It’s a golf course you could play every day.” I don’t know anyone who plays every day. But Carolina Colours is a golf course its members can play, with pleasure, every other day and feel they are getting more than their money’s worth. 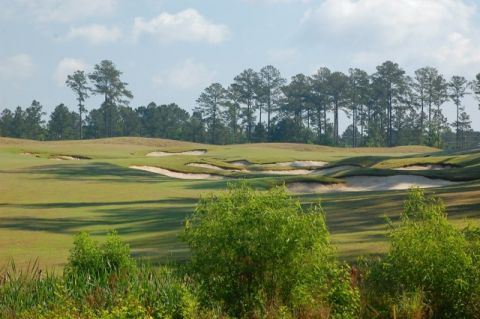 One of the few visually intimidating driving holes, the 17th at Carolina Colours, but there is more room out there than meets the eye.

Carolina Colours offers reasonably priced, high-value properties and new homes. Lots start in the $40s and homes start in the $200s. The charming historic town of New Bern -– it celebrated birthday number 300 a few years ago -- is just 10 minutes away. I sampled meals at a few of the town’s most praised restaurants, including Morgan Tavern & Grille and The Chelsea, just down the street from where a local pharmacist invented Pepsi Cola. You will not find a better breakfast venue than Baker’s Kitchen, which opens at 7 a.m. and serves a French toast that would make a Francophile smile (with a warm maple butter sauce that only makes it better).

Although New Bern is a good 40 minutes or so from the nearest beach, the confluence of the Trent and Neuse Rivers, and its downtown marina, give it a near-coast feel. Boats US magazine recently named New Bern one of the 10 best boating communities in the country. Most of the residents at Carolina Colors, the vast majority retired or near-retirement,

New Bern is a half day drive from New York and New England.
are from along the Interstate 95 corridor up to New England. One of the strong attractions for many who moved to Carolina Colours and the New Bern area is the proximity to family and friends farther north; New Bern is a 9 hour drive from New York City, 7 ½ hours from Philadelphia, and a mere 5 hours from Alexandria, VA, just outside of Washington.

Carolina Colours’ developer Ken Kirkman steered the community through the messiness of the recession, which slowed construction of some of the promised amenities, including the golf course, which was completed almost three years ago. Faced with piling on debt to finish his amenities or conserve operating cash, Kirkman opted to slowed things down and did a good job of communicating constantly and consistently with his residents, who didn’t have to go far to ask him questions, since he and his wife live in the community and show up for most of the Friday night cocktail hours and dinners in the clubhouse. 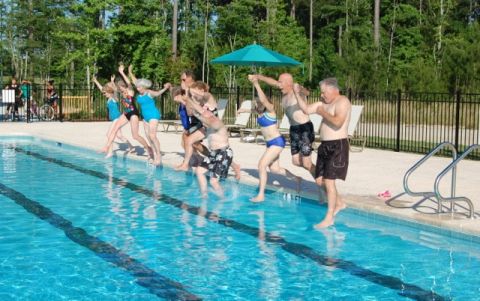 Everybody into the pool:  Carolina Colours residents celebrated the grand opening of their long awaited pool.

Last month, to ensure that promises made would be promises kept, and to secure the future of the community, Kirkman sold a majority interest in the development to the deep-pocketed Preston Development Company, but he remains on site and in charge of development and association activities.  And on the Friday before Memorial Day, he announced to the 50 or so residents at dinner that water was going into the new pool, which opened the following day.

Things seem to be going swimmingly at Carolina Colours. 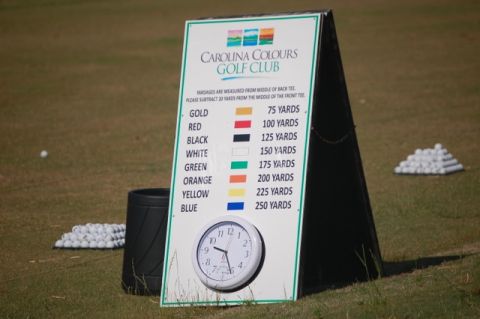 Carolina Colours does not make you guess at the distances on its practice range.

More in this category: « Mountain Golf Home for Sale near Asheville Champion Hills celebrates the number 25 »
back to top
Back to Top