One way to own a home on Shinnecock, Pine Valley or Winged Foot
Wednesday, May 29, 2013

One way to own a home on Shinnecock, Pine Valley or Winged Foot

The neighborhood in New Bern, NC, known as Greenbrier preceded by a decade or so the Emerald Golf Club that wends its way through the golf community. The original streets of Greenbrier, developed in the 1980s by the paper company Weyerhauser, bore the names of spices like Basil Drive, Thyme Court and Rosemary Road. According to Steve Tyson, a New Bern real estate broker and builder of 60 of the early homes in the community, Greenbrier was so popular when it first opened that Weyerhauser decided to build a golf course on the adjoining tree farm it owned. That helped sell even more of the most upscale properties in New Bern at the time.

A top-rated course in its time

The Rees Jones layout opened in 1988 and was an immediate hit with residents, other area golfers and raters; Golf Weekly named it one of the top 50 golf courses in the Southeast, and the PGA used the course for its Tour Qualifying School in the early 1990s. With the attraction of the golf course and its status as the highest-end community in New Bern, Greenbrier essentially was completed by 1994 (only two lots remain available for sale today out of 700 home sites). 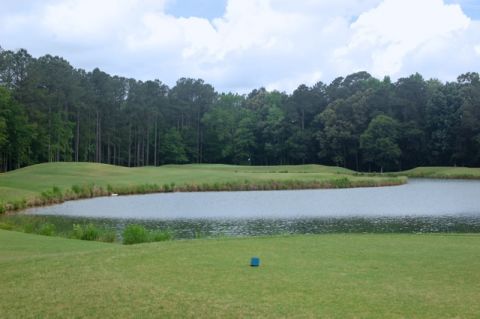 Unless you favor the left side of the fairway on the par 4 4th hole at Emerald, your second shot will be over water...again.

When the golf course was built, Weyerhauser decided to give prospective buyers the opportunity to live on a street named for a famous golf course. Today, a few families live at the intersection of Pine Valley and Shinnecock, and others on cul de sacs like Winged Foot Court. Rest assured that some of the kidders who live in Greenbrier wait for a reaction when they tell their friends that they live “on” Oakmont, Southern Hills or St. Andrews.

The golf club has been semi-private throughout its 25-years of operation; indeed, the only strictly private golf clubs in New Bern are Taberna, which was developed as a golf community but whose course has suffered some financial difficulties

in recent years; and New Bern Country Club, a Donald Ross design along the Trent River which features older homes along its periphery.  Steve Tyson, the local Realtor, sports a 2 handicap and thinks New Bern Country Club is the best course in the area but freely admits that could be because it is his home course and that at around 6,000 yards, and with tiny greens, “it suits my game.” He ranks Emerald #3 in town, behind the more modern Carolina Colours layout designed by Bill Love; I played Carolina Colours the day after I played Emerald and concur with the Realtor’s relative ranking of the two. Taberna and River Bend, a 1975 layout, would be tied for 4th in Tyson’s opinion.

The Emerald golf course may not be championship quality, but it was good enough to host a professional charity event during the 1990s that, thanks to the drawing power of its sponsor, former tour player Curtis Strange, attracted some big names in golf. The last round played in the event in 2000 included Strange, whose wife was a New Bern native, Tiger Woods, Justin Leonard and David Feherty.

That may be an odd assemblage of golfing luminaries, but there is nothing odd about the way the golf course unfolds. Emerald is generously proportioned, reminiscent of a tree-lined New England course with a preponderance of doglegs. The pros probably ate it up from under 7,000 yards, especially if pin positions on the large, generally softly contoured greens were within a few yards of the middle and if the bent grass greens were not shaved low; they were a bit on the slow side on the day I played. But they were in very nice condition, smooth and just long enough to make the direction of the grain more a factor than the green contour. After a few over-read putts, I got wise to the fact they were not going to break as much as it appeared. Hitting the ball straight and putting well will work on any golf course, but at Emerald, it will result in an appreciably lower score. One can imagine the golf gurus at Weyerhauser reminding Rees Jones that a challenging layout was a good thing, but a course that played fast would be even better. Mr. Jones listened. 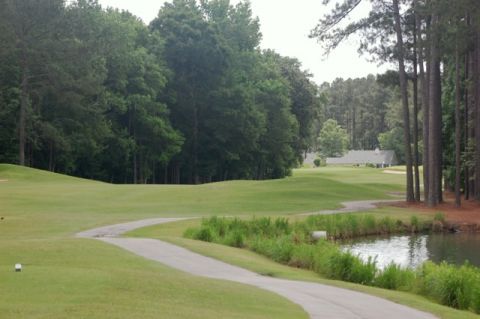 Off the tee, the fairway at the par 5 5th hole at Emerald appears narrower than it is, with woods on both sides.

If I play Emerald again, I will move back one tee box, from the blue tees -– at 6,123 yards and rating/slope of 70.2/126 –- to black at 6,483/71.7/129. It was tough to miss the wide fairways, even on slightly sprayed drives, and the large greens were easily accessible to all but the sloppiest approaches from the 150-yard markers and closer. After a morning rain, the course was virtually empty, and I was able to play the round, which included 150 photos and 78 strokes, in a leisurely 3½ hours. I noted a few hiccups out on the course -– the cart paths are in need of significant repair and the pin on #6 was in the far back, not in the middle as indicated on the pin position chart. But the friendly service at the snack bar and in the pro shop more than made up for those small lapses.

In fact, when I asked about a senior rate, club professional Catie Camacho said they didn’t have one but added that she would be “pleased to offer you a discounted rate of $40.” That was about 1/3 off the rack rate. The discount was a lot steeper than the bunkers, which along with one of my best rounds of the last year, played quickly and quietly, helped make for a gem of a day at Emerald.

Note: Resale homes in the Greenbrier golf community range from $155,000 into the high six figures. The $155,000 home for sale is on the 7th hole of the Emerald golf course and includes free membership as well as lawn maintenance courtesy of the community’s property owner’s association…I will have more to say in this space and in the June edition of Home On The Course, our free newsletter, about the “near” coastal town of New Bern, as well as Carolina Colours, a golf community with an engaged group of residents and members. 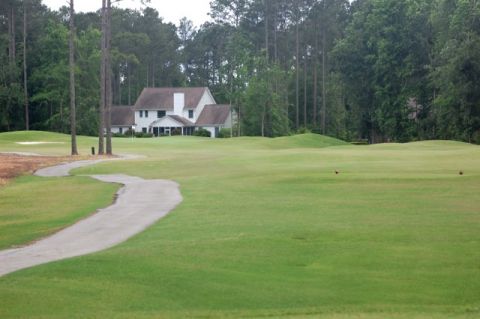 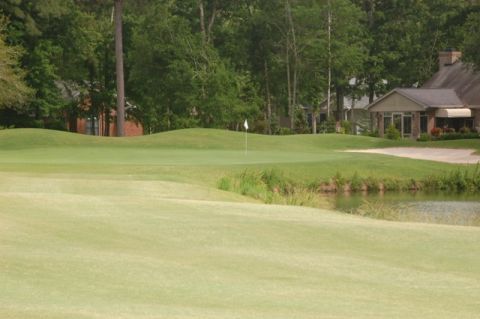