Written by  Larry Gavrich
Rate this article
(0 votes)
Members of most golf clubs have a hole on their golf courses that they love to hate. For those of us at Pawleys Plantation in Pawleys Island, SC, it is the short par 3 13th, with its tiny island green sticking out into the marsh, a brutal challenge even when the wind isn’t blowing (a mercilessly rare occurence).  Coming as it does in the middle of the back 9, it can be a score killer.  Some of our members refer to it as the “shortest par 5 in the Myrtle Beach area.”  A few take Jack Nicklaus’ name in vain. (He designed the golf course.)

At the other end of the Grand Strand of Myrtle Beach, 90 miles away, members at Rivers Edge Golf Club should feel similarly about their true par 5, the 536-yard 9th, where every one of the three shots on the hole is cringe worthy and where, no doubt, muttering may occasionally include the name “Palmer,” as in designer Arnold. 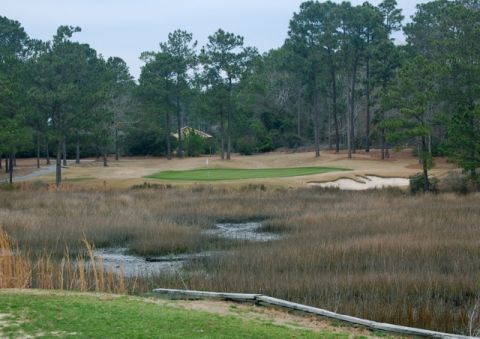 There is plenty of marsh to go around at Rivers Edge.  At the par 3 15th, a shot over the wet stuff is all the more difficult when the pin is set just over the false front of the green.

The journey at #9 begins with a mostly blind tee shot, the fairway tucked over a hill, the wide marsh and Shallotte River along the entire left side, cart path and woods along the elevated right side. The top of a tall tree beyond the green provides something of an aiming line. The trick is to bust a drive over the middle of the hill while turning a blind eye to the marsh on the left (lest you overcompensate and push your shot toward the cart path and woods on the right).  A well-struck tee shot will clear the hill and bound a bit left and down the other side to a wide collection area near where the marsh and a stream cut across the fairway.  Now you face a do and/or die decision:  Do you go at the area near the green, a forced carry of about 200 yards over the marsh, or do you look off to the right, away from the green, and play 160 yards or so over the marsh, just inside the 150-yard marker?  These are the only choices you have, and both seem bad.  (See the series of photos at bottom of the article.)

The approach shot from 150 yards is a knee knocker, maybe the most intimidating approach shot on the Grand Strand.  That narrow green, surrounded by marsh, now runs directly front to back from this angle, and the marsh winds are apt to blow hard enough to force a

shot out over the marsh.  As I stood up to the shot and tried to channel a punch shot, I regretted not having tried to fly the marsh and go for the bunker short and right of the green.  If you do decide to go for it, you face that impossibly narrow green 200+ yards away, running perpendicular to your line, just 40 feet deep, giving you almost zero chance of keeping a well struck shot out of the marsh beyond; your only reasonable play is to the aforementioned sand bunker on the far side of the fairway, about 15 yards short of the green.  With a high lip at its rear and front, the bunker offers all sorts of potential for bad lies.  Still, a third shot out of a bunker near the green on a par 5 is not a bad option.

Although #9 can ruin a round at the halfway mark, there are plenty of opportunities for disaster over the course of the entire Rivers Edge layout.  Marsh that cossets the Shallotte River extends as well to some of the inland holes, necessitating a number of forced carries; although the Rivers Edge women’s golf group plays an average of three times each week, designers Ed Seay and Arnold Palmer could not have been thinking about them when they laid out the golf course. Those who cannot bang the ball, say, 175 yards or farther in the air will be forced to bump shots less than 100 yards up to the marsh to have any chance of keeping their ball dry on their next shot.

Nowhere at Rivers Edge is that more true than at the 9th. If there is a more problematical par 5 on the east coast, please write to me about it (photos appreciated) and we will publish your thoughts here. 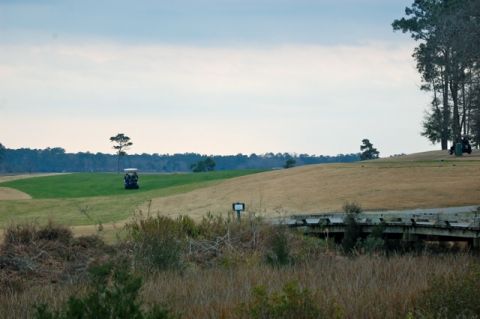 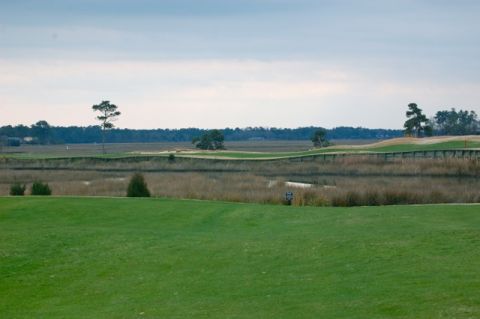 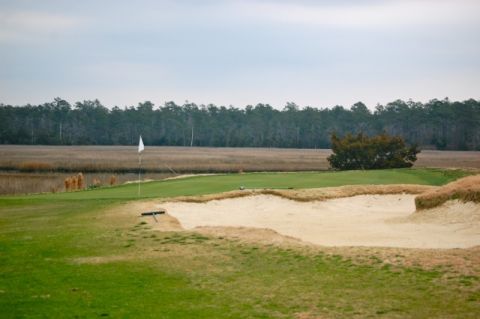 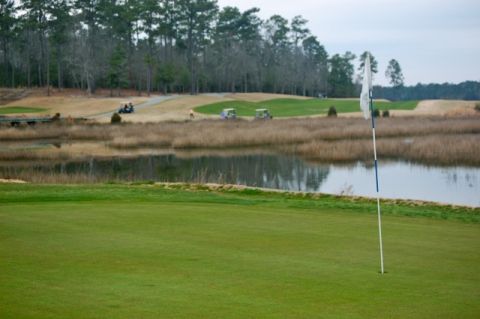 Photos from top:  The aiming line on the blind tee shot at the par 5 9th at Rivers Edge is just to the right of the tall tree in the distance, behind the green; a successful drive will wind up short of the marsh down the left side, offering the alternatives of a go at the bunker just short and right of the green, or the more conservative -- and shorter -- shot to mid fairway, about 140 yards from the green; big hitters who reach the greenside bunker in two will be faced with a tough shot downhill to the pin, the marsh almost immediately behind; as you look back from the green to the fairway, you might second guess your approach to the hole. 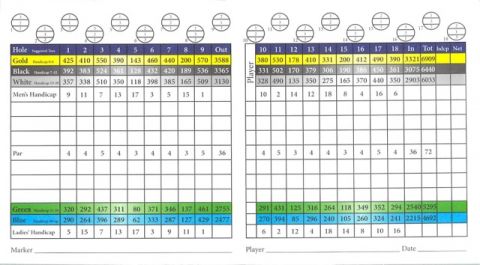 More in this category: « Doing Their Bidding: Foreclosed golf community attracting strong interest Chapel Hill urban center puts you close to everything, including excellent golf »
back to top
Back to Top