Written by  Larry Gavrich
Rate this article
(0 votes)
Only the strong survive in the current golf industry, and Southern Pines, NC’s National Golf Club has plans to survive and thrive in the dog-eat-dog competition of the Pinehurst area of North Carolina.  In the wake of a widely promoted redo of Donald Ross’s famed Pinehurst #2 by
Not so fast: The greens may be easier to putt, but they may be harder to find in regulation.
the Coore/Crenshaw Design group, the National Club’s owners announced recently that they will restore their Jack Nicklaus Signature design’s greens, add a hardier strain of bent grass and soften some of the most severe sloping on the large surfaces.  But club members and traveling golfers should not be too quick to envision an easier layout; the original greens have shrunk a bit over two decades, and in restoring them to their former size, greenside bunkers will come closer to the field of play.  The greens may be easier to putt, but they will be tougher to find in regulation.

Work commenced just before Thanksgiving, and the new greens should be ready for play by mid-March.  The new A1/A4 bent grass replaces the original Penncross bent planted when the course opened in 1989.  Some of the National’s greens’ most severe slopes will be re-contoured under the supervision of Nicklaus Design “shaper” Jeremy Miller.  Frankly, when I played the course last March (read my review here), I thought the greens large enough to accommodate the changes in elevation, but apparently the greens roll a little faster at other times of the year, giving fits to all but the most patient club members and visiting golfers.  With so many slopes and few flat spots, proper pin positioning apparently has been an issue as well.

"There is still going to be some grade,” said GM Ken Crow, “but it probably won't be as steep and run away from you as much."

Chris Cochran, one of Nicklaus’ senior designers, says that one hand may be giving in terms of degree of difficulty by softening the green contours, but the other hand is taking away easy paths to the hole.

"There's going to be so much more variety,” said Cochran, “[that] you're going to be able to put pins closer to features on the greens, closer to bunkers and closer to elevation changes.”

The club’s owners, the Smith and Robbinette families, are funding the unpublished costs of the renovations.  Homes inside the gates of National Golf Club, many with golf course views, start around $400,000.  Full golf club membership is $27,500, but the course can be played as part of golf packages in the Pinehurst area.  If you are interested in a visit to National Golf Club to explore the real estate options and take a turn around the golf course once the greens are done, contact me and I will be happy to arrange it. 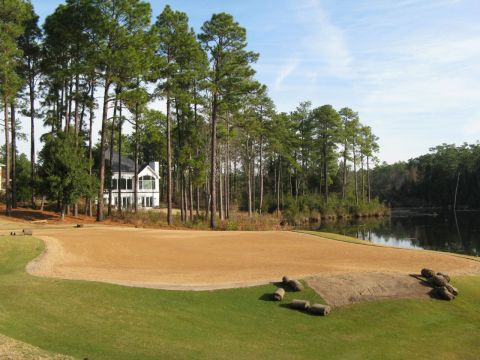 The original 2nd green at National Golf Club (top photo) was typical of many on the Nicklaus designed golf course -- large and double leveled.  The new #2 green will be more gently sloped but just as big.  And the water has not gone away.  [Note:  Thanks to Craig Distl for supplying the shot of the new green in progress.]

More in this category: « Trump This: The Donald has a big week The Donald doesn’t get The Point »
back to top
Back to Top