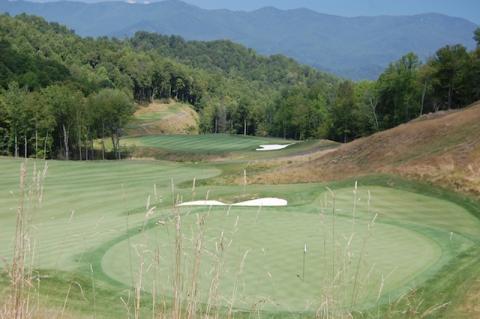 The views from the Arnold Palmer golf course at Balsam Mountain took my breath away.  The course took about a dozen golf balls.

As reported here yesterday, Balsam Mountain Preserve near Waynesville, NC, has recorded its best first quarter sales performance in its eight years. Balsam Mountain caught the market wave early enough in 2001 and built its wide range of amenities before the economic storm.  Now, with everything pretty much built and functioning smoothly, and with the track record and deep pockets of its developers, Chaffin & Light, it appears to be sailing along.
I don't typically do a lengthy follow-up to a review I published less than a year earlier, but those sales numbers piqued my curiosity.  So I called and

If you would like more information about Balsam Mountain Preserve or would like an introduction to the community, please let me know and I will arrange it.  Balsam Mountain's standard "discovery package" does not include a round of golf, but I can arrange that if you contact me to arrange a visit and tour of Balsam Mountain.  We can also arrange visits to other golf communities in the area, among which there are many to choose.

More in this category: « Balsam Mountain accolades keep rolling in... Mountains of problems: Some Carolina communities travel rocky road to survival »
back to top
Back to Top