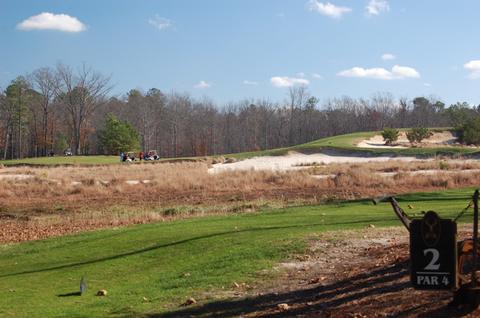 Into a stiff breeze, the carry from the 2nd tee to the raised fairway feels like 200 yards plus.

Tobacco Road in Sanford, NC, made me sick the two times I have played it in the last six years.  The first time it rained and sleeted relentlessly for nine holes before I quit with chills that didn't go away for four hours, despite the welcoming circular fireplace in the rather spare clubhouse.  Last Sunday, I barely made it through 18 holes in sunny 60-degree weather; the treks up and down the steep faces of sand traps and the steps to the elevated greens took their toll on this out-of-shape 60 something.  My feet took me boldly where no cart was free to go, although carts are free to go virtually everywhere through waste bunkers except up their slopes.  The final five holes left me literally breathless, and I went six over par.
There is much about Tobacco Road that will take anyone's breath away, in the best sense of the word.  At times the course's dramatic expanses of scruffy, sandy wastelands, deep bunkers at greenside and swirling fairways and greens seem to channel Pine Valley, the best golf course I have ever played. This being a public golf course, however, Tobacco Road could not exist as such if it were anywhere near as tough as Pine Valley.  Forced

The final five holes left me literally breathless, and I went six over par.
carries from tee to fairway are reasonable, rarely more than 180 yards or so from the men's tees.  The fairways are quite generous as well; you have to work at hitting the ball out of play, something I was unfortunately successful at a few times during the round.  But scoring at the Road depends almost entirely upon the quality of your approach shots to the occasionally ridiculously obscured greens.  Once there, the putting surfaces, though undulating, are generally forgiving, holes more often lying in funneled or flat areas than at the base or crest of the severe slopes.
The course ratings and slope ratings tell much of the story of Tobacco Road's schizophrenic personality.  From the men's tees I played at a modest 6,300 yards, the rating is just 70.8 (against par of 71) but the slope is a robust 141.  In other words, a scratch golfer should not shoot worse than par on the course, but a bogey golfer will have trouble.  It played out that way for my son Tim and me.  I am a "soft" 10 handicap these days, meaning most of my rounds are between 82 and 86, and I play enough bad strokes to be severely penalized on a course with a high slope rating.  At Tobacco Road I shot 84 with three double bogies; I thought I played pretty well except for a few bad drives and approach shots.
Tim, who plays collegiate golf, loves Tobacco Road and all courses designed by the late Mike Strantz and carries a handicap near scratch, shot a splendid 69 from the back tees, which play to a short 6,530 yards.  He didn't think he played any better than he did a day earlier at Pawleys Plantation, Jack Nicklaus' tough course in the Low Country of South Carolina, where he shot 76.  At Tobacco Road, he hit his drive on #1 280 yards over the huge mound that guards the right side of the fairway (see photo accompanying Monday's posting), then put a solid three-wood shot up into the following wind.  His ball wound up just 12-feet beyond the hole.  He sunk the putt for eagle and played even par over the next 17 holes.
The yardage book describes the 2nd at Tobacco Road as a "welcome sight after the testy 1st hole" but it didn't look welcome to me from the tee
The second hole's bark is greater than its bite.
box.  Into the wind, it required a drive of at least 185 yards into the 10 mph wind to clear the expanse of waste that runs from the tee.  A narrow bailout fairway is available on the right but that leaves a long approach shot to a green guarded by fearsome bunkers right and left.  But as with many holes at Tobacco Road, #2's bark is greater than its bite; just hit the drive relatively straight to the fairway, and the approach to the green is pretty straightforward.
The 3rd, a short par 3 (147 yards from the men's tees), is all about the narrow green, which runs 60 yards deep.  We were fortunate the pin was in the middle of the multi-tiered surface.  A shot to above or well below the hole puts a three-putt in play.  And the green is just narrow enough to make the bunkers left and right a factor.
The 4th is perhaps the most reasonable birdie opportunity on the front nine, a 507-yard par five that requires a well positioned drive and second shot to a wide fairway about 125 yards from the green.  That leaves a pretty simple short iron to a kidney shaped green but, as with every green at Tobacco Road, a pushed or pulled approach will almost guarantee bogey.

I'll have further comments and photos of other holes in coming days. 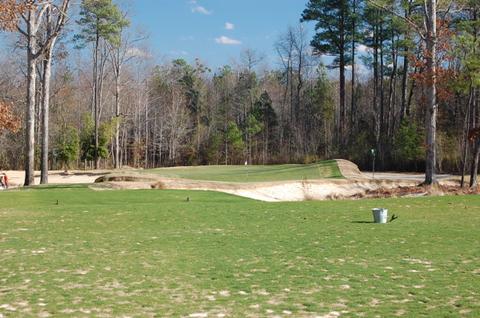 The green at the par 3 3rd hole is deep and narrow and multi-tiered.  The only "easy" pin position is in the depression in the middle of the green... 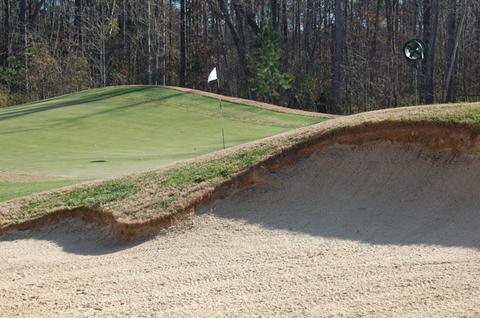 ...but if you come up short and right, it will be an uphill battle for par all the way. 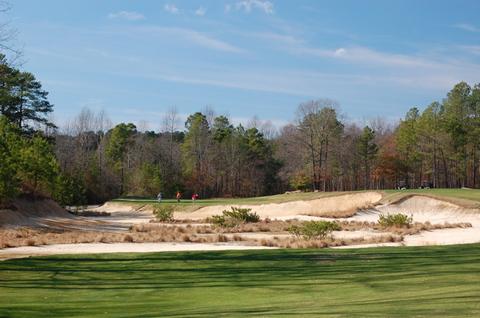 The 4th may be the most reasonable birdie opportunity on the course, a par 5 with a generous landing area for second shots (upper right of photo), leaving a simple wedge or 9-iron approach to the kidney shaped green.