I consider myself fortunate that, last weekend, I was able to play two outstanding golf courses in the Low Country of South Carolina and Georgia that had been dramatically -– and at substantial expense -– renovated in recent years. Both golf courses –- Ford Plantation and Wexford Plantation –- are at the centers of communities of homes valued at $1 million and more, and the conditions and layouts of both are what you would expect from clubs populated by people who are used to the best things in life that aren’t free.
Ford Plantation, which surrounds the golf course, has a rich history. Located in Richmond Hill, less than a half hour south of Savannah, it occupies grounds that served as the winter home of Henry and Clara Ford. At one point, the famous car manufacturer had amassed 70,000 acres in the Richmond Hill area to serve as his family’s winter playground. With Lake Clara at its heart and the Ogeechee River alongside the property, it is a congenial host for fishing, boating, as well as top-flight golf for its property owners, all of whom are required to be club members in some fashion or other. Ford even maintains a position for Director of Outdoor Pursuits, in other words a naturalist available to help members chase birdies and other fauna of a different type than on the golf course. 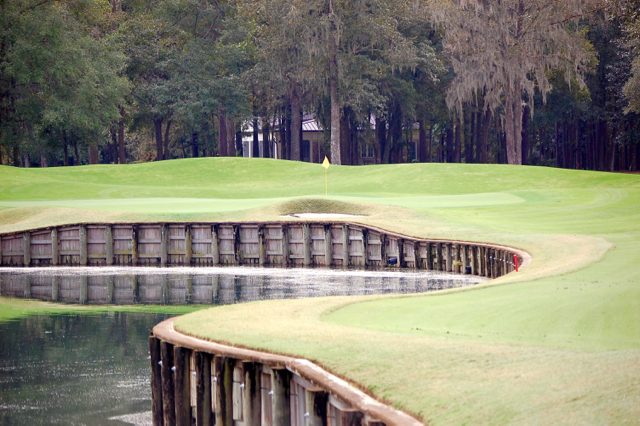 Use of railroad ties was reduced to just this one par 3 at Ford Plantation. "Mr. Dye," the President of Ford Plantation Club's board told us, "has become more member-friendly."
Water is central to the community but water has always been a problem for the golf course since the original developer, from the Mideast who didn’t play golf, bought the land, was convinced by confidantes that he needed a golf course, and hired Pete Dye –- he had heard he was the best -– to lay it out. Dye, reportedly, told his patron that there was not enough dry land to accommodate a full 18-hole golf course, to which he was instructed to fill in some of the marshland to accommodate the extra holes. “Too expensive,” Dye allegedly responded. “Spend whatever it takes,” replied his not-to-be-denied patron.
It took $11 million, one of the most expensive golf course jobs of its era when it opened for play in 1985. That was pretty much before any dwellings had been built on the site. When I played the Ogeechee Golf Club in 2007, before its name change and long after the original developer had fled to the Mideast to avoid some unpleasantness with American law enforcement officials, I thought layout of the course was among the best I had encountered in recent years. On the back nine especially along the river, the course felt links like, festooned with hillocks and pot bunkers indigenous to most Dye designs. I was blessed by good weather back in 2007, and what I did not know was that rains of any duration could render the course unplayable; the original sin of having built some holes on the marsh came back to haunt club members decades later. 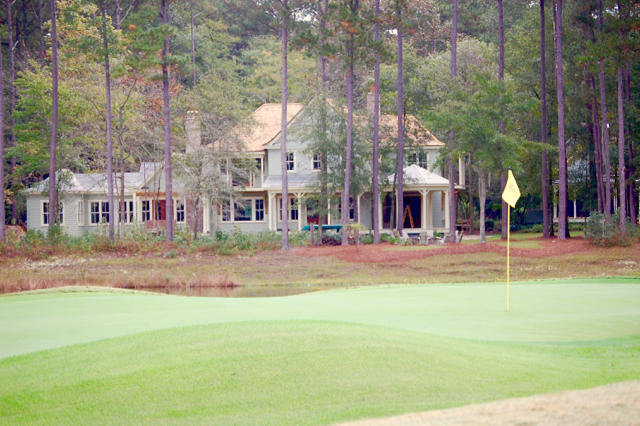 Most homes in Ford Plantation are priced above $1 million. We saw a few currently under construction.
Only a small handful of the club’s members –- 15, I was told -– walked away when the majority voted to assess themselves the equivalent of an initiation fee at a high-end club in order to get the renovation going. Last year, after spending a whopping $7 million, most of it on the drainage issue and a total redo of the layout by Mr. Dye himself, the club re-opened to critical praise and, more important, the plaudits of its club members. I can understand the positive fuss after playing 18 holes there with Paul Wickes, a former New York based attorney with a top international law firm and in his second year as Ford Plantation Club’s President; and two enthusiastic fellow members, one a doctor and one a former specialist on the floor of the New York Stock Exchange.
The layout is sleek and challenging and fun to play, and the turf on fairways and greens is beautifully conditioned. (And after a few days of on-and-off rain, I saw no obvious wet spots on the course.) But this is not, to the casual eye, a golf course that fits the standard Pete Dye oeuvre, even though the back nine retains its feel of a links course (thank goodness). As Paul Wickes pointed out, the Dye signature railroad ties that buttressed lakes and lagoons and the occasional bunker are gone, except for one par 3 where it would have been a crime against art to remove them (see accompanying photo).
“I think Mr. Dye has become more member-friendly in his advancing years,” Paul noted. Dye turns 90 next month. 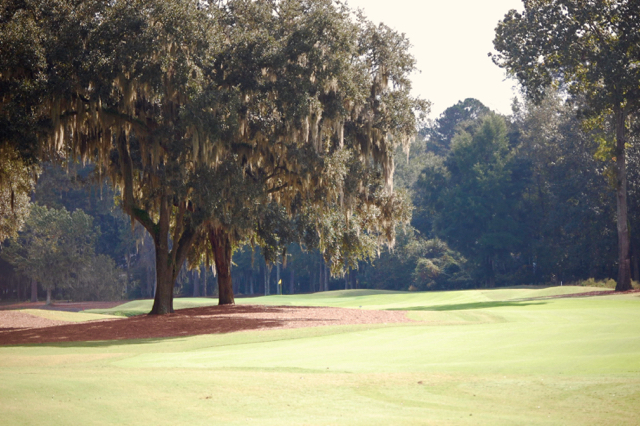 Pete Dye redid the entire layout at Ford Plantation. He fixed a multitude of drainage issues beside the marshland. The layout is a mix of Low Country parkland holes on the front nine (one par four shown here, back nine hole shown at bottom) and more links style holes on the back, by the Ogeechee River.
There were other touches that illustrated Paul’s assessment was spot on. The bunkering was emphatic without being aggressive, which is to say pot bunkers were at a minimum; happily, fairway moguls were also almost non-existent, maintaining the sweeping views across the landscape. The green complexes were challenging and thoughtfully molded, providing a number of opportunities to putt the ball from five yards or more from the surface.
Ford Plantation is solidly in the category of “upscale” golf community, and the price of admission is for high worth individuals only. The least expensive home currently for sale at Ford Plantation is priced a bit deceptively and out of character with its neighboring homes, given that it sits on a 2.9-acre lot that looks out onto the Dye golf course and yet is listed for only $475,000. But a closer reading yields a description of a 1-bedroom, 2-bath carriage house of just over 1,100 square feet, certainly habitable for a couple that likes their surroundings ultra-cozy, at least for a relatively short period of time. Alas, the broker with the listing sees it only as temporary housing. "Live on site," the description reads, "as you build your main home." The cottage is a bargain in another way; if the next owners purchase it by the end of the year, they will save $50,000 because Ford Plantation Club will raise its mandatory membership initiation by that much, to $100,000, at the end of December.
For more information about Ford Plantation, please contact me. I will have some thoughts about Hilton Head Island’s Wexford Plantation in the coming days. 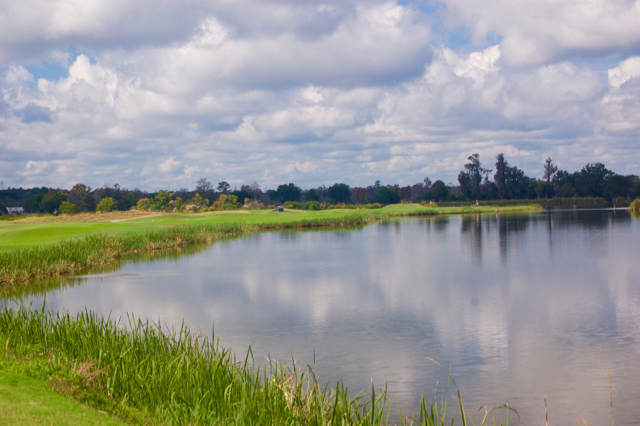 More in this category: « Harbor Club, alternative to Reynolds Plantation, debuts new home model In the Shadow of Goliath, David Makes Giant Strides »
back to top
Back to Top