Jekyll Island: Where millionaires once played, you can too
Monday, March 22, 2010

Jekyll Island: Where millionaires once played, you can too 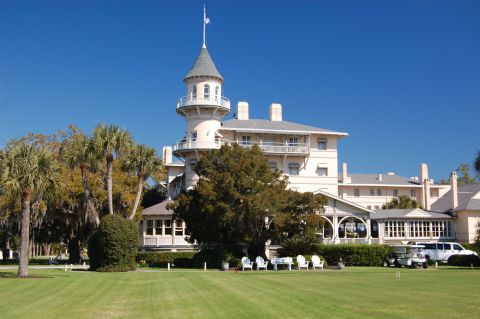 The Jekyll Island Club was built by millionaires as the core of their playground, but mere mortals can enjoy the croquet lawn and other amenities without being rich or famous.

The list of former residents of Jekyll Island reads like a Who’s Who of American tycoons:  Goodyear, Rockefeller, Morgan, Vanderbilt, Pulitzer.  Their progeny have now scattered to more secluded and international domains, but these captains of industry left behind a classic hotel, a few

The tycoons left behind some of their cottages and a classic hotel which the rest of us can wander through at our leisure.
of their impressive “cottages” (now museums), and a beach that you can have almost to yourself if you time your visit right (it was nearly empty on 70-degree days last week).  As I wrote the other day, the architecture on the rest of the island may seem a bit tacky, but if you ratchet back your expectations and don’t mind driving 20 minutes to St. Simons or Sea Island for a meal –- there are a scant few restaurants on Jekyll –-then you can look forward to a reasonably priced golf vacation.

The Jekyll Island Club offers three golf courses.  I walked the Pine Lakes course during a college golf tournament, and it was in very nice shape after a pretty tough winter. Because the island is owned and run by the state of Georgia, government funds supplement golf revenue to maintain the courses.  Pine Lakes was not especially tough - about 6,700 yards from the longest tees and flat – but the greens were tricky and well bunkered, making difficult pin positions possible.  And few of the lakes on Pine Lakes were in play.  Most golfers consider the Oleander course the best of the trio, which also includes one called Indian Mound.

Home prices on Jekyll Island run the gamut.  Within walking distance of the beach, you can find condos that start in the $200s and single-family homes over $1 million.  In 2047, the Georgia state legislature will decide whether to keep Jekyll Island essentially frozen in time, or turn it over to private developers.  At that time, the entire character of the island could change, but for those who don’t have a 36 year time horizon, Jekyll Island is worth considering -- for a vacation at least.

Greens at the Pine Lakes course at the Jekyll Island Club are well bunkered making for some nasty pin positions, if the greenskeeper is so disposed.

More in this category: « Not what “The Doctor” ordered; golf club owned by Julius Erving in foreclosure Jekyll Island: The good and bad of government run islandcare »
back to top
Back to Top