Jekyll Island: The good and bad of government run islandcare

The nation has spent the last few months debating – yet, again – the role of government in the lives of its citizens.  I am listening to the final arguments about healthcare from Jekyll Island, GA, where I am following my son’s golf tournament at the Pine Lakes club, one of the island’s three and a half golf courses.  Jekyll Island could be the poster story for government involvement in something many believe is best handled by private enterprise – real estate development.

Jekyll Island, for those interested in both golf and coastal living, has a history rich in controversy, a frozen in time beach ethos, and an ultimate fate yet to be decided, even after more

It costs a $5 "parking fee" to get onto Jekyll Island.
than half a century of development.  The Jekyll Island story includes all the elements of a great historical novel, including greed, corruption, rich people and poor people, race relations and all manner of chicanery.

In short, the state of Georgia supervises Jekyll Island, and leases property there to others.  A 100 year state law to oversee the island runs out in 2047 when, as has happened before, state legislators will debate whether to turn the island over to private interests for further development.  That decision may hinge on how Jekyll is doing economically at the time, or the fight may resemble what we are hearing in Washington and across the nation today – whether the government can run anything better than private enterprise can.

I give the Jekyll Island experiment a mixed verdict from my casual observation of the last two days here.  The good:  The place is clean and orderly, the infrastructure seems solid (the roads appear adequate to handle even summer traffic), and the dozens of cyclists and beach walkers, even on cool March days, seem less like tourists than their counterparts in Myrtle Beach or on the boardwalks of the New Jersey Shore.  Jekyll Island is about as laid back as a beach community gets.  One more “good,” especially for tourists:  The motels are strung out, Daytona Beach style, along the beach, so that the sand is a few strides from your doorstep if you choose to stay on Jekyll.  The motel where I am staying is charging $100 for an oceanfront room, which seems fair even in the “off season.” (It will be 72 degrees today.)

On the other hand, Jekyll Island is frozen in time.  The housing and motels appear to be circa 1950s and ‘60s, not exactly a high point in the history of residential architecture.   Oddly, there are only two restaurants open on the island, and not many more that will open in the high season.  Ironically, when Rockefellers and Morgans and Carnegies played along these shores, high season was January through April.  Take away the collegiate golf tournament at the three-course Jekyll Island club, with dozens of teams and parents in attendance, and Jekyll Island would be pretty much a ghost town.

One last minor irritant:  As you enter the island, you are stopped at a gate and asked, nicely, to pay a $5 “parking fee” that is good until midnight each day.  The only places I parked were at the motel and golf club.  Parking fee is code for island entrance fee.  Leave the island for dinner on nearby St. Simons Island or in Brunswick, and you will pay another $5 to get back to Jekyll.  For those who don’t like the idea of a “use” tax, Jekyll may not be your kind of place.

I’ll be taking photos on the golf course today and hope to post a few here in the next few days.  In the meantime, here is a link to a terrific article, written a decade ago, about the history of Jekyll Island with some of those elements of a good historical novel I mentioned above. 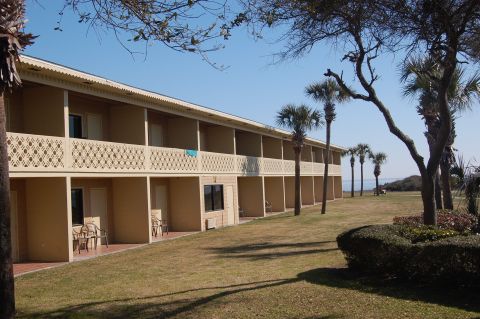 The Oceanside Inn & Suites on the beach at Jekyll Island is indicative of the motel and residential architecture that dominates the island.

More in this category: « Jekyll Island: Where millionaires once played, you can too Million-dollar baby at The Landings »
back to top
Back to Top