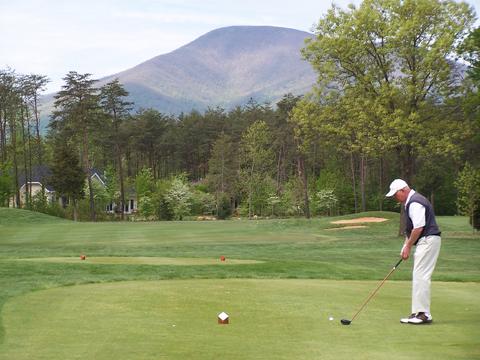 From the first tee at Wintergreen's 27-hole Stoney Creek course, you know you are in for some special views.  A second 18, the Devil's Knob, is on top of the mountain.

The latest issue of Travel & Leisure Golf (October 2007) highlights eight excellent southeast U.S. resort courses that stand out for autumn golf.  All are either within golf course communities or close to residential areas.
We have played three of the eight and have the rest on our list for visits soon.  The three we know offer a range of climates and amenities.  As resorts, they make it easy to stay a week or more, "kick the tires" in the community to see if you like the course, the people and the local culture before making any long-term commitments.
The Wintergreen Resort is in the Blue Ridge Mountains of Virginia about 40 minutes west of Charlottesville.  It isn't exactly in the sub-tropical belt, but some - especially skiers - will find the four-season climate part of the allure.  We played two of the three nines at the Rees Jones-designed Stoney Creek course at the bottom of the mountain at Wintergreen; it was typical Jones, with well-placed bunkers of the tee and at greenside but a fair course all the way around.  Residents told us that on some days in January, you can ski on the mountain in the morning and then drive down to the golf course and play in the afternoon (with a sweater on, of course).  The other 18 at Wintergreen, called Devil's Knob, is an Ellis Maples design built on the very top of the mountain.  Its first tee is a hundred yards from the terminus of the ski chair lifts.  The course, which is closed from October to April, features some gorgeous mountain views and precarious edge of the mountain lies.  For our extended previous review of Wintergreen as well as contact information, click here.
Pawleys Plantation also makes the T&L list, the magazine noting that Pawleys Island "is removed from Myrtle [Beach's] notorious crowds."  Indeed, I maintain a second home at Pawleys Island largely for that reason; far enough away from the honky tonk beach atmosphere but close enough to take advantage of the more than 100 courses in the area.  Pawleys Plantation, a muscular Jack Nicklaus design, is tough and beautiful, especially on the back nine as it makes its way out to the marsh.  Pawley's 13th hole, a short par 3 that is all carry to a tiny green surrounded by marsh, is a sure par if you keep your ball anywhere on the green, and a sure bogey or worse if you don't.
My son and I still talk about our round at Cuscowilla almost two years ago.  It is a most unusual course because of its "normal" layout; no modern affectations intrude on the natural feel and smooth routing of the layout.  Bill Coore & Ben Crenshaw are best known for unfussy courses that

A round at Cuscowilla is golf the way it was meant to be played.
highlight native elements, and at Cuscowilla, always in the top choices of residential golf courses, they have accomplished their goal to the max.  The native grasses frame the holes (and some of the bunkers), the "sand" in those bunkers are a bright red from the good old Georgia clay mixed with the sand, and the entire effect is golf the way it is meant to be played - on foot, with short walks between the green and the next tee.
Other courses on the T&L list are Kiva Dunes on the Gulf Coast in Alabama, Callaway Gardens in Georgia, St. James Plantation in Southport, NC, the Inn at Palmetto Bluff in Bluffton, SC, and the Resort at Glade Springs, WVA.  We hope to play them all in the coming year and report on them here and in the HomeOnTheCourse Community Guide. 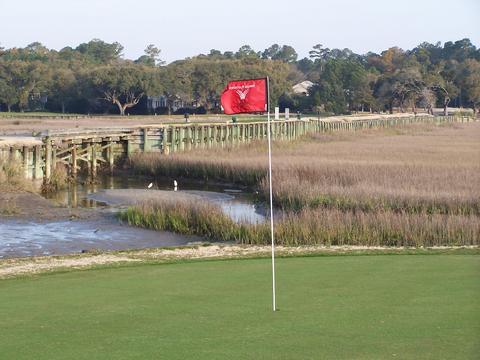 The short 13th at Pawley's Plantation plays from a dike to a tiny green surrounded by marsh.