True links golf is hard to come by in the U.S., especially near urban areas like New York. With few exceptions, golf courses built on sandy soil near an ocean and within commuting distance of a big city were converted into real estate or public beaches long ago. Or, in the case of the early 20th Century masterpiece Lido Golf Club in Long Beach, NY, on the south shore of Long Island, into a crowded town beach and middle school.

The Lido club’s genes are as impressive as those of the most iconic American golf courses. Charles Blair Macdonald, he of Yale Golf Club, National Golf Links and Greenbrier White Course fame, designed the original Lido course in 1914, assisted by Seth Raynor, with some of the holes within sand wedge distance of the ocean. Shortly after it opened, famous golf writer Bernard Darwin described Lido as “the finest golf course in the world.” (Mind you, Shinnecock Hills and the National Golf Links were already open for play.) Macdonald described the making of the course for a news article at the time, and it was preserved in Golf Illustrated magazine. (Click here to access a copy.) 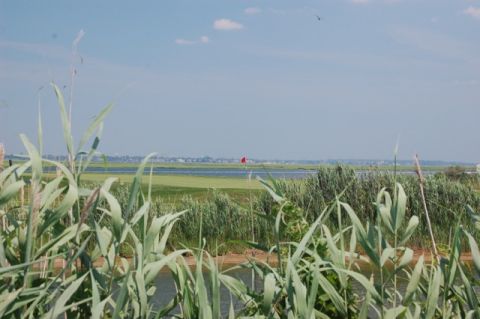 When you cast your eye in certain directions at Lido Golf Club, you might think you are on a links course separated from the rest of the world.  Seconds later (below), reality sets in. 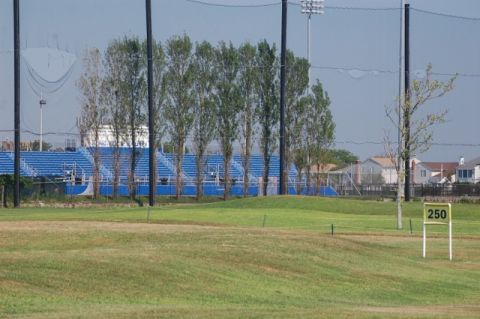 A Pink Lady rises from the beach

A New York state senator named Reynolds envisioned a “paradise” country club resort on the Lido beach and acquired 186 acres adjacent to the golf course in the late 1920s. The centerpiece of Reynolds’ paradise was a huge bubble gum colored Moorish-style hotel, which became known as The Pink Lady, but the hotel was about all the senator was able to complete before the Great Depression dashed his grander plans and may

Lido Golf Club's history includes C.B. Macdonald, assisted by Seth Raynor, and Robert Trent Jones.
have contributed to his early death in 1931. Eventually, the hotel fell into receivership and was used by the U.S. Navy as a “discharge center” in World War II. In 1962, a new owner sold 175 acres of the resort’s property to members of the Lido Golf Club who, later, sold most of that land to the towns of Hempstead and Long Beach. (The municipalities used the land for the aforementioned public beach and school.) Robert Trent Jones was commissioned to build a new layout a quarter mile inland from the ocean and on the Reynolds Channel where the current layout opened in 1948.

Lido has come a long way, but it has a long way to go. The golf course could be among the finest on the east coast if it weren’t for such pesky idiosyncrasies as civilization and Mother Nature. The adjacent middle school, for example, and a football field used by Long Beach High School line the 9th hole, necessitating the use of an obnoxious four-story high net to catch sliced drives. (It saved me a penalty stroke when I uncorked a wild drive, but still…) Along the southern boundary of the course is a fence that protects errant golf balls from Lido Boulevard and the modest row houses along the thoroughfare; the homes are barely an eighth of a mile from the beach, but you never see the ocean from the almost perfectly flat layout. As you make your way out toward the Reynolds Channel, which is punctuated beautifully by fingers of bright green marshland, smokestacks and other signs of commerce line the horizon. The pleasure boats that bob along the bay form a kind of odd counterpoint to the belching smokestacks and make you appreciate, even more, what the ocean views from the original Macdonald 18 must have been like. 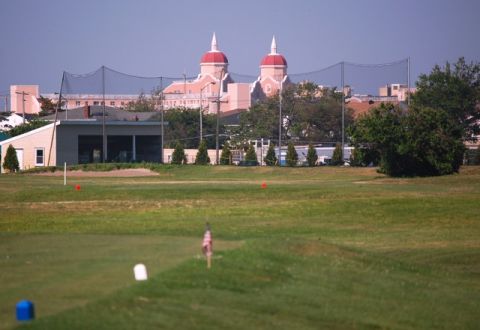 The view to the famous Pink Lady would have been uninterrupted when it was first built in 1929.  The present day Lido Golf Club was not opened until 1948, but we like to think that the protective netting and practice range bays would not have been around to obstruct the views then, either.

Links golf on a budget

If it were possible to somehow silhouette out some of the visually unappealing adjacencies, Lido would be one of the finest layouts east of the Mississippi, given that it is the product of arguably the most skilled of all the Jones boy golf architects. From what one can tell today, Jones honored the idea of links golf by imposing bunkers only where it made perfect sense and not mimicking too much the round shapes and sod faces of traps on the classic Scottish layouts. The course is unfussy, the way a true links course should be, but certainly with potential for odd bounces and alternative shot choices, especially if the wind is blowing. It is hard to know what, if any, effects the intervening 65 years has had on the bunkering around Lido, but there are few penal high lips to contend with; and the sand –- my local playing partners told me much of it is from the Atlantic beach about 600 yards away –- quite yielding to a wedge.

I would not describe Lido Beach as a difficult golf course –- rating 71.7 and slope 122 from the blue tees at 6,522 yards –- because many of the fairways are adjacent and generous to pulled or sliced shots and, in typical links fashion, you have the prerogative –- sometimes it feels like an obligation –- to roll the ball up to the smallest of the elevated greens (more about the greens below). Of course, like any links turf, a well struck tee shot will bound down the fairway an extra 20 to 30 yards on all but the soggiest days.  But a par 5 and a par 3 among the finishing holes may have you reaching for one club, and then another, before you settle on your final choice.  More about that in the next part of the story.

Next: Great past, but what about Lido’s future?

More in this category: « The road back for Lido Golf Club (Part 2) And we thought golf was slow »
back to top
Back to Top