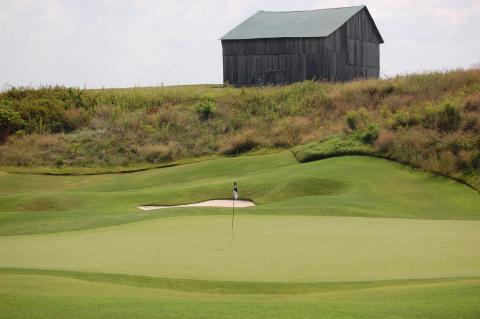 Those who want to avoid a state income tax could live and play at The Ridges in Jonesborough, TN.


No one can predict with certainty what is going to happen to southern golf community real estate prices in the coming months.  But over time, prices -- like the South itself -- will rise again.  They always do.  Indeed, there are signs that in the most stable golf communities, prices may be leveling off and preparing for a return trip upward.
With the recent rebound in the stock market and a bit more consumer confidence, the large numbers of Baby Boomers who have been on the sidelines will pursue their dreams of a home on the course.  If that happens, prices in

Once the balloon of pent-up demand bursts, prices in the south will rise more quickly than those in the north.
the south are likely to rise faster than comparable properties in the north.  As the spread between the two widens, Boomers will get the picture quickly that the equity in their primary homes will buy less and less home in the south the longer they wait.  Real estate pricing operates on the simple principle of supply and demand, and once the balloon of pent-up demand bursts and the Boomers begin the strong migration north to south, prices in the Carolinas, Georgia and even in some parts of Florida will begin to trend back upward (and, potentially, prices up north won't move very much, at least for a while).
In the most popular and stable southern communities, and across all price ranges, the upward trend in pricing could be swift, and some who wait too long could be priced out of the market or have to settle for a smaller piece of property or home.  Boomers with equity in their primary homes are in the best positions to make a move soon, and for a few good reasons:
1)    They are likely to downsize anyway, what with their children grown and off on their own.  The value of their 3,000 square foot home, say, in suburban Boston, will translate into a nice 2,300 square foot residence in a prime golf community.  The lower price for less real estate could more than pay for golf club membership.
2)    In all but a few cases, the cost of living in the south will be lower -- in some cases significantly lower -- than in the town they are leaving in the north.  Southern property taxes are lower, and Boomers with retirement income to protect will flock to states like Florida, Tennessee and Texas, which have no state income tax.  A move from Boston to Knoxville, TN, for example, will result in a cost of living improvement of 34%, according to Where to Retire magazine.  That same move to Asheville, NC, which does have an income tax, will still result in a 25% COL improvement.  A couple could give themselves a healthy raise simply by moving to their dream home.  (Contact me if you would like other cost of living comparisons.)
3)    When the real estate market nationally turns around, as it always does eventually, sheer demographics will increase prices faster in the south than in the north for comparable properties.  That great whooshing sound we hear will be all those Boomers heading south.  Those on the leading edge will get the best selection of properties at the best prices; those on the trailing edge will pay more for less.  Again, supply and demand rules the market.

4)     I am not an economist, and this is not a political statement, but it does strike me that, with all the money the nation is borrowing, inflation is a big risk.  In that case, prices of properties will rise even faster than their natural inclination to do so, making any real estate purchased prior to inflation a pretty good deal.

Those who are not ready to retire but have the same dream of a home in the southern U.S. should keep a close eye on the market.  One hedge against the scenario of higher prices described above is to consider purchasing a home

Those not ready to move could hedge against future price appreciations by purchasing a home site or townhouse now.
site or townhouse in a stable community.  My wife and I did this in Pawleys Island 10 years ago by purchasing a condo.  We considered that, in the long term, we would build or buy a home in Pawleys Plantation but feared that price appreciation over time could make that difficult.  Therefore, we bought the condo more as a hedge than as a vacation retreat (but we have certainly used it for vacations).  Although our strategy hit a bump in the road with the economy, the market value of our condo is about 40% higher than what we paid for it a decade ago.
The notion of hedging against faster price appreciation in the south than in the north seems even more appropriate now that the market appears to be at or near its bottom, and poised for possibly dramatic price increases in the coming months.

Tomorrow:  Preparing to purchase property in a golf community

More in this category: « Asked and answered: Choosing the right golf community for you Work and play: Some Connecticut homeowners steps from jobs and first tee »
back to top
Back to Top