Work and play: Some Connecticut homeowners steps from jobs and first tee
Friday, May 1, 2009

Work and play: Some Connecticut homeowners steps from jobs and first tee 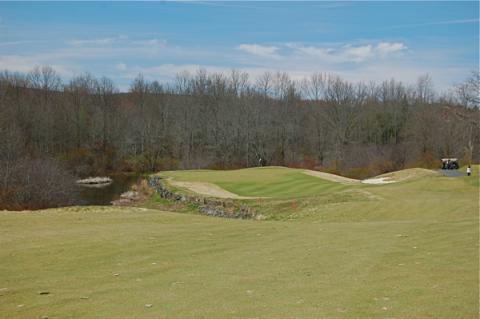 Before renovations, the extraordinarily hard-to-hit 3rd green at Gillette Ridge actually featured a large bunker directly in front.  Such sadism had earned the course criticism from those who played it.


When Bloomfield, CT's Gillette Ridge Golf Club opened in 2004, players and other reviewers savaged it for its degree of difficulty and iffy conditions.  The Arnold Palmer designed course, which threads its way among gleaming corporate offices and recently constructed villas, was unfriendly for any but the straightest-, longest-hitting players.  Course managers decided that Gillette Ridge's survival was a matter largely of removing some of the treachery around the greens, specifically the parade of bunkers that made greens in regulation nearly impossible for most.
Today, less is definitely more at Gillette Ridge, with the removal of bunkers that were just too penal.  Some resentment lingers, though; contributors to the latest Zagat "America's Top Golf Courses" rating guide call some

holes "over-demanding" and "not very playable." Based on a round there recently, I can stipulate that Gillette Ridge is challenging but that it can take its place among the most imaginative of the upscale daily fee courses in the Hartford/Springfield area.  And for those looking for a New England home on a course for the warm weather months, the reasonably priced adjacent residential community would pair up nicely with a winter home in the southern U.S.  Best of all, for anyone who works in one of the nearby corporate offices, a home in Gillette Ridge puts them literally steps from both work and play.
Bloomfield has become something of a daily-fee golf destination in recent years, what with Gillette Ridge and Wintonbury Hills, one of the best municipal courses in the land, opening earlier this decade.  Designed by Pete Dye for a mere $1, Wintonbury Hills, like Gillette Ridge, is just 15 minutes from Bradley International Airport and an equal distance from insurance center Hartford.  Visiting corporate managers have been known to disembark at Bradley and sneak in a round at Wintonbury before heading for a meeting.
Wintonbury had the clear bragging rights until Gillette Ridge's recent renovation; but with the softening at Gillette Ridge, including the elimination of severely sloped bunkers that made rollups to most of the firm greens impossible, the mid-teen to high-teen handicapper can enjoy some of the satisfaction single-digit players enjoy.  Gillette Ridge is by no means a tiger turned pussycat; after a round there, I'd say it is more a puma or mountain lion or something like that.  It rewards good shots, punishes bad and provides some unusual visual notes.
First, as mentioned, are the office buildings.  The 1st and 10th tees are a few strides from one of the worker cafeterias, and it can be a bit daunting to look back before you strike your tee shot and see dozens of eyes

peering out at you (or at least you think they are peering out at you).  Nowhere do the buildings come anywhere near the field of play, but they do occasionally provide some distant aiming lines; if the angle of the sun is just so, they can also affect your eyesight as much as your line of sight, what with the glare off the glass windows.
Local heavily trafficked roads surround the periphery of the course, and traffic noise is occasionally distracting.  But the encroachment of civilization can work to the advantage of a coffee drinker who, after putting out on the 8th hole, can steer the cart toward an adjacent strip mall and Starbucks, before heading for the 9th tee.  On the back part of the course, the tower of St. Thomas Seminary looms large beyond a grove of trees, and as you come up the 17th hole, a troika of monolithic stone structures clustered at the right edge of the fairway bears witness to a difficult approach to the toughest green on the course.
The pleasantly designed townhouses only come close to the course along the tee boxes at the 17th.  Otherwise the real estate is a couple of hundred yards away at its nearest point.  GDC Homes, which has been in business for 45 years, developed The Greens at Gillette Ridge, a group of town homes with prices beginning in the mid $300s, and single-family homes that begin in the $500s.  Amenities include a clubhouse with fitness center, lounge and outdoor heated swimming pool.
Besides the proximity to the airport and Hartford, Gillette Ridge is just up the street from the University of

Hartford, which offers some interesting courses for non-students, as well as a Division I sports program.  The school's womens basketball team, coached by former University of Connecticut star Jen Rizzoti, has made it to the NCAA championships in recent years.  The town of West Hartford, less than 10 minutes away, boasts a thriving entertainment and shopping scene, including many restaurants that could hold their own against big city establishments.
The golf course was a surprise to me after all the early bad notices and my own impressions.  I had followed a high school golf tournament there before the renovations, and I vowed never to play it.  Coincidentally, when I did play it two weeks ago with my son, we were matched with two juniors who were practicing for a tournament that began at Gillette Ridge the following day.  They showed no signs of the same frustration the high school golfers experienced a few years earlier.
From the tips, Gillette Ridge plays to a robust 7,191 yards, a stout rating of 75.4 and slope of 141 (you can imagine what it was like before).  From the shortest "men's" tees at just 6,133, but with a slope of 134 (70.0 rating), double-digit handicappers will get all they can handle.  Reference to the yardage book, which shows the original, pre-renovation layout, demonstrates just how difficult the prior design was.  The par 4 3rd hole is long at 431 from the tips, 380 from my shorter tees.  A long drive must avoid two bunkers at mid fairway left in order to have any go at the green.  The green is narrow and is protected on the right by a yawning bunker and on the left by a steep drop off to water literally below the green's edge.  The yardage book indicates that a large bunker directly in front of the green has been removed.  You wonder what Arnie was thinking, or wasn't, when he designed the hole originally (see photo at top).
The front nine, which I found the harder of the two nines, presented other difficult approaches.  The second shot on the short par 4 5th must carry water and a stone wall before coming to rest on a green that slopes back to front and, naturally, toward the water.  The three shot par 5 7th, one of the longest in the state of Connecticut at 612 yards from the back tees, demands that the second shot negotiate a narrow spit of land between an ugly bunker on the right and rough and trees on the left.  The shot to the green then must carry a stream and ravine.

Large, undulating greens are challenge enough, but the King was not content to give Gillette Ridge players a putting challenge alone; no, he has to front such greens with a string of menacing bunkers, as he does at #10, making it an all-carry affair, and again at #16, a sizeable par 4 with grass at greenside only occasionally

interrupting large and amoebic shaped bunkers.  Just when you think Arnie is really messing with you, he gives you a reachable par 4 at #13 (242 yards from my tees, 294 from the back), where a shot shaped right to left actually can result in a putt for eagle.  Too far left and you have to bring the rake with you to the middle of the huge bunker and then figure out where to aim your shot to the steeply two-tiered green.  The round ends on a classic note; the 18th is one of the best designed on the course, with a reachable bunker at fairway right.   Another bunker at the right front of the green actually offers a little protection from the water that borders the entire right side and rear of the green.
You have to bring your ‘A' game to Gillette Ridge.  Scoring well there takes some work.  I suppose that is only fitting in such a corporate setting.

Gillette Ridge, whose green fees range from $65 to $80, offers two levels of membership.  Platinum membership includes unlimited play and cart for $3,000 annually, an additional $1,200 for spouse and $300 for each child under 17.  Gold membership, at $1,800 ($900 additional for spouse), offers unlimited play with a cart fee of $25.  Members can call for a tee time 14 days ahead.  I don't typically quote a corporate fee, but it seems fitting for the surroundings.  Corporate memberships are $7,000 per year for four designated employees and provide the same features as the Platinum Membership.  The Gillette Ridge Golf Club can be reached at (860) 726-1430; the website is GilletteRidgeGolf.com.
For more on real estate opportunities at Gillette Ridge, please contact me. 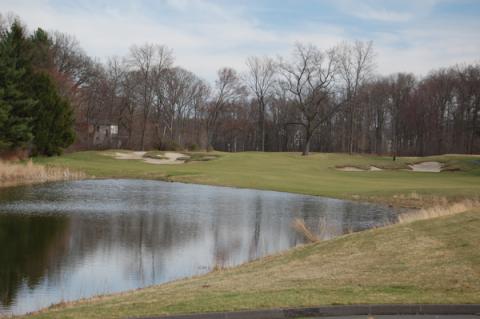 The green at the short par 4 13th at Gillette Ridge is driveable, but a tee shot that finds the bunker short and left of the green could just as easily result in bogey as birdie.

More in this category: « Real estate prices: The South will rise again...perhaps soon A moving dilemma: Put lipstick on the pig or buy a new pig? »
back to top
Back to Top