Grand buffets: How to gorge on golf without exploding your budget
Wednesday, April 29, 2009

Grand buffets: How to gorge on golf without exploding your budget

The six courses at The Landings combine the water, sand and marshland that are characteristic of Low Country layouts.


Yesterday, we discussed two of the best multi-golf course communities in the eastern U.S., the ultra-luxe Cliffs Communities and Reynolds Plantation (see article immediately below).  Their golf courses –- soon six at Reynolds and eventually eight at The Cliffs -– are superbly conditioned and laid out, but at $100,000+ for membership, they will appeal primarily to those whose substantial portfolios were not ravaged by the economy.   The rest of us with big golfing appetites will have to look elsewhere, but with some small compromises here and there, the menu is large and tasty.


The Landings on Skidaway Island

At a relatively mild $50,000, membership in the six private golf clubs at The Landings on Skidaway Island in Georgia is one-third the tariff at The Cliffs.  And because some homes in the 25 year old community require a little bit of updating, real estate prices are quite reasonable.  (Note:  I helped a couple find a handsome home on a green at The Landings last year and am working with another couple who plan a second visit to the

community later this summer).  The six courses at the 4,500-acre Landings are of a totally different character than The Cliffs and Reynolds, playing through forests of live oaks and along sweeping marshland.  But they are no less well conditioned, despite their popularity with more than 1,000 golf hungry members.
The Arthur Hills Palmetto course, for example, is as finely tuned a Low Country layout as you will find, and acknowledged by most club members and independent raters as the toughest course of The Landings’ half dozen.  Tom Fazio’s pleasant routing at Deer Creek is a favorite among golfing couples –- eminently fair from the women’s tees but just enough of a challenge for hubby that a good golfing pair can have an engaging match without one having to spot the other too many strokes.  The other courses at The Landings include another by Hills, one by southern designer Willard Byrd, and two early examples of Arnold Palmer’s handiwork; taken together, they all provide as much variety inside the gates as you will find anywhere.  One modest caveat to those who just like to walk up to the first tee of their private club and play:  Because of the popularity of The Landings courses and the consequently higher volume of play, a little planning –- say a day or two ahead –- is wise.

The golf courses in LandMar communities may lack some of the panache of exclusivity at The Cliffs and Reynolds Plantation, but they more than make up for it in comparative savings.  For a modest initiation fee and reasonable dues, members of one LandMar club can expand their club membership to multiple other high-quality courses (only a few, though, are private).  For example, membership in the private Osprey Cove Club, in the St. Marys, GA, community of the same name, opens up for play a number of other clubs managed by Hampton Golf, a Jacksonville, FL company with which LandMar (and Crescent Communities) maintain an affiliation.  Full golf membership at Osprey Cove is just $15,000 for the nice Mark McCumber designed course, with dues an ultra reasonable $4,000 per year.
Although LandMar’s other private courses are a couple of hours or longer drive from Osprey Cove, some outstanding public play courses are within a half hour, in the Jacksonville area.  They include the Arnold Palmer designed North Hampton golf course, which many believe to be one of the best in the golf course laden state of Florida (I played it and loved it); South Hampton Golf Club, another Mark McCumber design in St. Augustine; and Eagle Harbor Golf Club, designed by Clyde Johnston.  LandMar members pay only a $25 cart fee to play.

You won’t find the designs of Greg Norman, Davis Love III, Tom Fazio and Pete Dye clustered inside any community but one, the Barefoot Resort in Myrtle Beach.  The resort has been in the news the last week, and not because it wanted to be –- brushfires consumed some parts of the courses and more than 60 homes at Barefoot.  According to Barefoot officials, however, the only damage to the courses, other than a few burned spots, were the wooden bridges that traversed some of the layouts’ marshland.  Things are returning to normal now, normal being an active set of resort courses open to most anyone staying on premises or in local hotels.  Only the Pete Dye course, which requires a separate membership ($60,000) from the other three courses’ $20,000 fee, pretends to any kind of privacy (the club refers to itself as “semi-private”).  To join Barefoot, which boasts about 1,250 members, just 200 of them full-time residents, you must be a property owner.  For the time being, the developer is waiving any initiation fee with the purchase of a new property.  The only requirement is $125 in monthly dues, which is rather modest for such name designer golf.

Of course, the most reasonable approach to buffet golf would be to buy a home in a golf rich area -– say Pinehurst, Myrtle Beach or along the Robert Trent Jones Trail in Alabama –- and pay as you go.  By taking the “supermarket” approach to golf, you skip initiation fees and dues and get to play as many as 110 courses, as is the case along the 90-mile stretch of Myrtle Beach.  That works out to a different course every day for about four months.  And with the purchase of one of those ubiquitous golf passes, like the Myrtle Beach Passport ($39) or the Robert Trent Jones Trail Card ($39.95), the discounts are substantial.  By my rough calculations, you could play 120 rounds per year along the Jones Trail for the cost of the annual $6,000 dues at The Cliffs.
And by the end of the year, you would have also saved the $150,000 in initiation fees, which you could apply to the gas you will need to drive the Jones Trail...as well as annual jaunts to Pebble Beach, Bandon Dunes or St. Andrews –- and still have enough left over to dine at the best buffet restaurants. 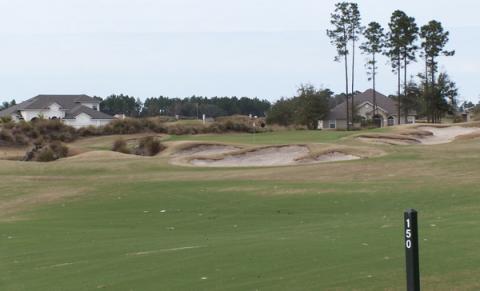 Members of any LandMar community golf club in the Jacksonville area can play the splendid, links-like Palmer designed North Hampton for just a $25 cart fee.

More in this category: « A moving dilemma: Put lipstick on the pig or buy a new pig? Smorgasbord golf: When membership in six or more courses is an option »
back to top
Back to Top