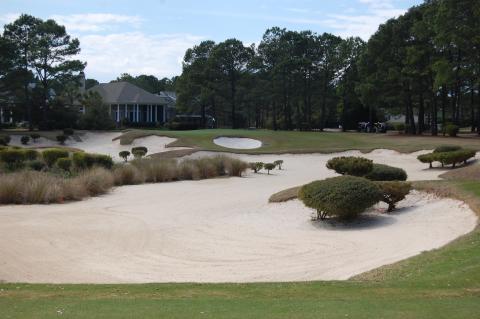 On the 17th hole (above) and 16th (bottom) at Belfair Golf Club, designer Tom Fazio adds a second hazard to his gaping sand bunkers in the form of bushes and trees.

Tom Fazio is up there among my favorite golf course designers, and I am certainly getting my fill this week of Fazio layouts.  I write this from Callawassie Island Club in Okatie, where I will play 18 of Fazio's 27 holes there tomorrow.  On Sunday, I played the Arthur Hills Morgan River layout at Dataw Island Club but my host took me over late in the day to play the three

scenic finishing holes on Fazio's Cotton Dike course.  Then Monday I had one of Fazio's two courses at Berkeley Hall in Bluffton to myself late in the afternoon, along with a mandatory forecaddie, Trey Long, who helped neutralize the pain of some bad swings with his good humor and guidance on the subtly contoured greens.  Yesterday, it was Fazio's dramatic layout at Belfair, also in Bluffton, where he imported a lot of sand -- I mean a lot, big gaping bunkers that often cover half the lengths of entire par 4s.

Fazio's bunkers are not to everyone's taste.  I like the way they frame holes and add a little extra drama, but they are hazards that require no additional embellishments.  Yet at Belfair, as you see in the photos, the designer was probably so conscious of the wide expanses of sand that he felt he had to splash them with a little color, in the form of bushes and little trees.  They do add contrast, but for those unlucky to wind up in or behind one of them, they add a double penalty that is excessive and unnecessary. 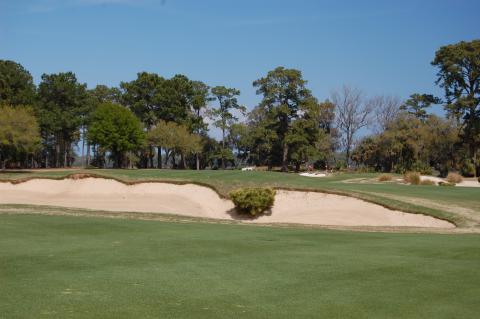 More in this category: « Walk this way? Uh, no thanks Easy does it »
back to top
Back to Top