Bad news on boomer wealth should not be stop sign for those who dream
Monday, March 2, 2009 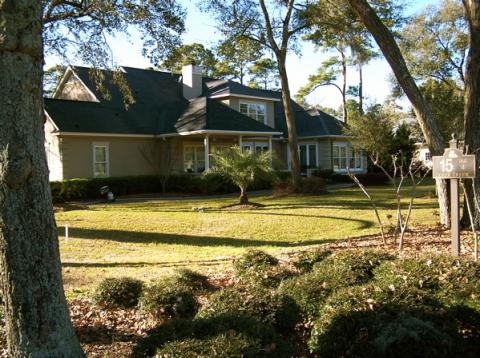 The Landings at Skidaway Island is a sprawling community that features six excellent golf courses, a range of home styles and prices and a location just 15 minutes from Savannah, GA.  Home prices in Savannah have dropped an average of just 3.3% over the last year, according to Zillow.com

I may be the last one who should advise others to ignore the loss in their home's value, take what equity they have and move to that dream home on the golf course in the southern U.S.  After all, I have stood as still as Lot's wife watching what stocks I own drop by as much as 50% (or, in the case of Bank of America...well, never mind).  At each 10% increment on the ride down, I would suggest to my wife that we should cash out a substantial part of our modest stock holdings and stow the money in something ultra-safe, like FDIC-insured certificates of deposit.  After all, a safe 2% annual gain is a lot better than a 2% loss on what seems an almost daily basis.  And yet the feeling that it can't get any worse would creep in and the urge to sell would pass.
We don't need a white paper to tell us all we have lost an enormous

Remember those renters we used to laugh at?  Who's laughing now?
percentage of our wealth in just the last five years, especially those baby boomers like me who own a home, a 401K and other stock market investments.  The world has been turned upside down, and we are living in something of an alternate universe.  One example:  Remember all those renters we used to laugh at because they were passing up real estate appreciation and tax deductions?   According to a recent report by two economists at the Center of Economic and Policy Research (CEPR), a Washington think tank, those idiot renters will have more wealth than us homeowners by the end of this year.  Who's laughing now?
CEPR's study is illuminating and depressing in its comparison of home equity and net wealth amounts for baby boomers between 2004 and 2009.  Their most riveting information is that "nearly 30 percent of households headed by someone between the ages of 45 to 54 will need to bring money to their closing" when they sell their home.  (In 2004, the figure was a mere 3 percent of owners.)  In other words, the sales price on these homes will generate less than 6% in equity for the sellers (the 6% represents real estate commissions and other costs of closing).  In the older group of baby boomers, ages 55 to 64, more than 15 percent will need money at closing, up from just 1 percent in 2004.
The glass-half-full story, though, is that more than 20 million boomers do have equity in their homes, at least for now.  Those with equity, especially those who have paid off their mortgages, should have no financial impediments to relocating to their dream home, assuming they have no personal or family obstacles.  As I have written here before, my wife and I are ready to go except for a high school junior whom we do not want to uproot before graduation (and except for the accumulated stuff it will take us two years to dispose of).
Today I looked at some year over year housing trends in the southern U.S. and compared them to those in my Connecticut town.  Where I live, home

prices have dropped 8% over the last year, not a disaster but it still hurts.  In many areas of New York, Massachusetts and New Jersey, for example, the dips have been steeper.  In some southern markets where many large golf  communities were developed within recent years, the drops have been similar.  For example, Mt. Pleasant, SC, just north of Charleston, has seen an 11% dip in year over year numbers.  But in other areas where development was more measured, like Knoxville, TN (down just 1%) and Savannah, GA (down 3.3%), the slide has been more gradual.  (Note:  Figures are from Zillow.com).  Should the trends continue at similar rates in my town in Connecticut and these towns in the south, the spread between the price I will get for my house and the one I might buy in the south will widen.  Cost of living figures in the south are generally lower than up north, so as each year goes by, I am losing out on those savings as well.
Waiting for my primary home's price to improve before I relocate has another downside.  When the market does stabilize, all those baby boomers who have been waiting to relocate will swell the migration numbers headed south.  Home prices in the Carolinas and Georgia and, yes, even Florida, will recover more quickly than those of the northern states.  Who knows?  Maybe think tank studies five years from now will show that those who made the move in 2009 and 2010 were as smart as those who chose to rent instead of buy from 2004 on.
The CEPR study is fascinating, if a little depressing.  You can access it by clicking here.  If you would like me to explore the difference in home price trends in your hometown and towns where you might like to move, let me know and I would be happy to run the numbers and research some potential properties for you.  There is no charge for this service.

More in this category: « The high and low of golf community "discovery" tours T&L Golf readers choose Carolinas & Georgia as best area to live; Florida finishes second »
back to top
Back to Top