Carolina mountains high spots for McCain, although Asheville and Charlotte solid for Barack 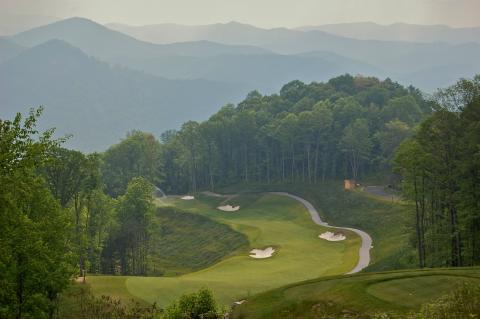 The Nicklaus Design layout at Bear Lake Reserve might make you forget it is only nine holes.


Conservative golfers looking for kindred spirits could find a home in the mountains of the Carolinas.  Upstate in both North and South Carolina, I counted only three counties of 25 that went for Obama.  Most notable was Buncombe County, North Carolina and its largest town, Asheville, surrounded by red counties but which voted 57% for Obama.  Many artists and craftspeople live in Asheville, which is often described as a small-scale San Francisco.  The city of 75,000, home to the helpful Center for Creative Retirement at the local branch of the state university, has undergone a significant transformation over recent years as newcomers arrived from the northern and Florida.
In the Asheville area, those looking for a golf community have a wide range of choices, from the upscale and private Cliffs at Walnut Cove to the open and public Reems Creek, which features a sloping and challenging British-designed layout.  Yancey County, just north of the city, went slightly for McCain (52%).  Its Mountain Air community, with breathtaking views and top-of-the-mountain airstrip, is about a half hour from Asheville. Henderson County, on the other side of Asheville, and home to the mature and member-run Champion Hills community and its classic Tom Fazio golf course, gave McCain a 60% victory.
Brevard, Lake Toxaway and Sapphire comprise Transylvania County, just above the South

Carolina border in the western panhandle of North Carolina.  The county went 56% for McCain.  Earlier this year, I played an enjoyable round of golf on the well-conditioned Connestee Falls course in the community of the same name, just outside the charming and vibrant town of Brevard.  Other area choices include the recently renovated Sapphire Valley and Glen Cannon, whose par 3 2nd hole plays to a green backed by a dramatic waterfall.
Just west of Transylvania, 52% of Jackson County voters went for Obama, something of a surprise to me after a recent visit to the rural county.  Perhaps the presence of Western Carolina University in the county seat of Sylva tilted the numbers Democratic.  A few miles down the road from the school, Bear Lake Reserve offers a course at the top of the mountain that is so dramatic in its views that you might not care that it is only nine holes.  Neighboring Haywood County (McCain 53%) is chock-a-block with interesting golf courses, including Laurel Ridge, Waynesville Country Club (originally designed by Donald Ross), Maggie Valley, Springdale and the jaw-dropping Balsam Mountain Preserve, whose views from the Arnold Palmer course are distracting, in the best possible meaning of the word.  The Windover Inn in Waynesville, a bed and breakfast, is a great place to stay in the area.
The counties surrounding Greenville, SC, home to a number of the Cliffs Communities, all went strongly for McCain, with the mostly rural Pickens County totaling 72% for the Republican candidate.  Greenville County, whose population is mostly in the city of Greenville, opted 61% for McCain.
In the lower lying areas of the Carolinas where golf communities are plentiful, voting tended to skew Republican.  However, Obama's most commanding victory in the Carolinas was in the Charlotte area and Mecklenburg County, where the economy has soured quickly and the Democratic candidate took 62% of the vote.  Charlotte, which is home to the evaporated Wachovia Bank, as well as Bank of America, had maintained its financial footing until September's banking crisis.  Now prices on homes in the popular Lake Norman area and such communities as The Point (Greg Norman course) are eroding in the wake of corporate consolidations and layoffs.
In Aiken County, South Carolina, home to Mount Vintage, Woodside Plantation and Cedar Creek, 61% of voters opted for McCain.  Up in the Pinehurst area, in Moore County, 60% voted for McCain.  Yet in the area of Winston-Salem (Forsyth County), Obama copped 55% of the vote.  Most of the good courses in the Winston-Salem area are semi-private or public; you could do a lot worse than a reasonably priced annual pass to Tanglewood, where two excellent courses, including the venue for the 1974 PGA Championship, await.
Speaking of annual passes and reasonably priced public access golf, I was smitten by the few courses I played earlier this year on the Robert Trent Jones course in Alabama, a state that gave McCain a huge 60% to 39% tilt.  But Democrats do not despair because 13 counties in Alabama actually gave the nod to Obama, a few of them located along the Jones Trail.  Most notably, Jefferson County, which surrounds Birmingham, voted 52% for the President-elect.  I loved the course I played at Oxmoor Valley, inside the city limits, but others think the tournament venue Ross Bridge even better.   Finally, when I played the Robert Trent Jones Trail golf course at Silver Lakes, near Gadsden, AL, I was struck with the excellence of the golf and the unbelievably low prices of the adjacent housing.  However, if your politics tilt Democratic, understand that you will be in the minority in the surrounding Etowah County; 69% of its citizens voted for John McCain.
For those relocating in the next few years, political discussions are apt to be lively, no matter where you choose to live. 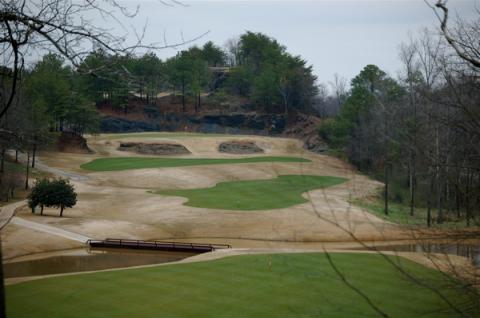 Birmingham's Oxmoor Valley is one of the oldest along the Robert Trent Jones Golf Trail.  The county around the city went for Obama but the entire state of Alabama went strongly for McCain.

More in this category: « Bottoms up: Timing the housing market In election, Atlantic coast communities see red »
back to top
Back to Top