An Alternative to the Typical Scotland Golf Trip
Wednesday, September 19, 2018

An Alternative to the Typical Scotland Golf Trip

When I think of St. Andrews and all the wonderful courses in the area, I am reminded of the old Yogi Berra attributed quote about a particular restaurant: “No one goes there anymore. It’s too crowded.” Anyone who has tried knows how difficult it is, for example, to get on the Old Course. Pick a day, throw your name in for the lottery, and pray. Kingsbarn, arguably the course in the area that gets the most positive reviews, now commands Pebble Beach type fees –- and gets them. If the economy and stock market remain robust, there is no telling how long it will be before true commoners have easy access again to the courses in the Kingdom of Fife.
I have found in the past two days that there is an alternative not only for those who might want to play Scottish golf courses that don’t command back flips or second mortgages, but to have access to additional activities that include things other than golf and whiskey –- not that there is anything wrong with those. To wit, a stay in the cosmopolitan city of Edinburgh and, get this, an easy and cheap train ride to a number of world-renowned golf courses, and a few others that perhaps should be.

Training Day
On Monday, I threw my clubs on my back, stuck my shoes in a bag and carried all to Waverley Station, Edinburgh’s main train station just a five-minute walk from my hotel on George Street in the New Town section of the city. (The easy, downhill walk from the train station in North Berwick to the golf course takes about five minutes.) Along the way, not a single person on the crowded streets near the train station gave me a sideways glance as I bumped a few of them with the bag. This is Scotland, laddie. 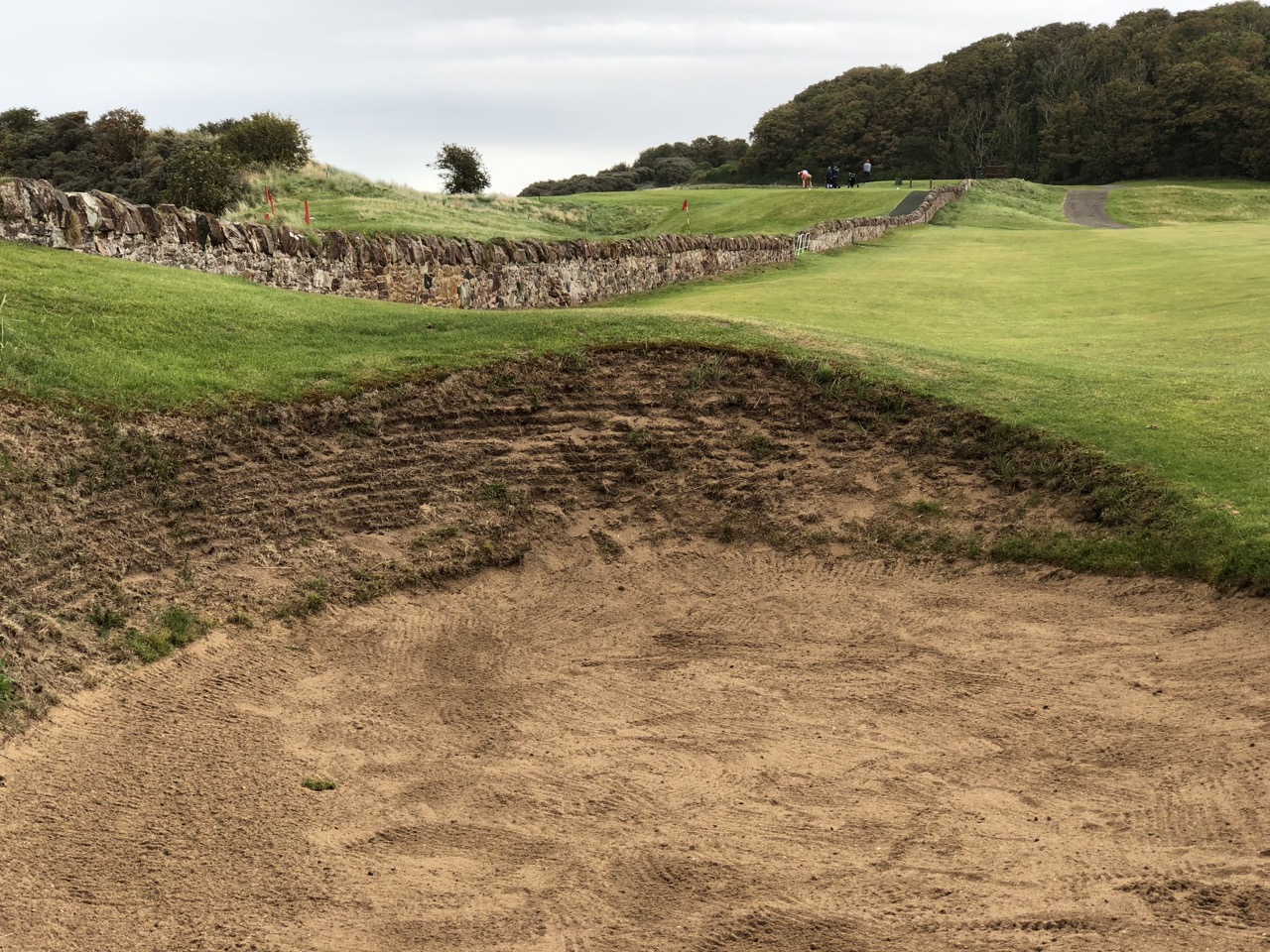 Sod-faced bunkers and old stone walls are part of the challenge, and beauty, of North Berwick.
My train trip to North Berwick took just a half hour, with stops that included Musselburgh, home to a golf course reputed to be the oldest in Scotland. North Berwick is a legendary links layout from which other great courses inherited such features as the “redan” green which runs, rather severely, from front right to rear left. I have played redan style greens in the States, but never one like #15 at North Berwick. The green runs a good 60 yards from front to back with a huge depression between the two halves of the green and bunkers along the left half of the green making it foolhardy, if not impossible, to play toward a back pin position. My playing partner from Australia left his approach on the front right edge of the green with the pin sitting near the back and actually two-putted from about 150 feet. I’ll bet he will be talking about that one back home.
North Berwick features other “quirks, such as old stone walls that run alongside fairways and greens and definitely come into play. One man’s quirk is another man’s “cool.” I think walls on a golf course, especially those that might actually redirect a wayward shot (i.e. close behind a green), increases the chance for creativity on the golf course. That certainly adds to the fun quotient. 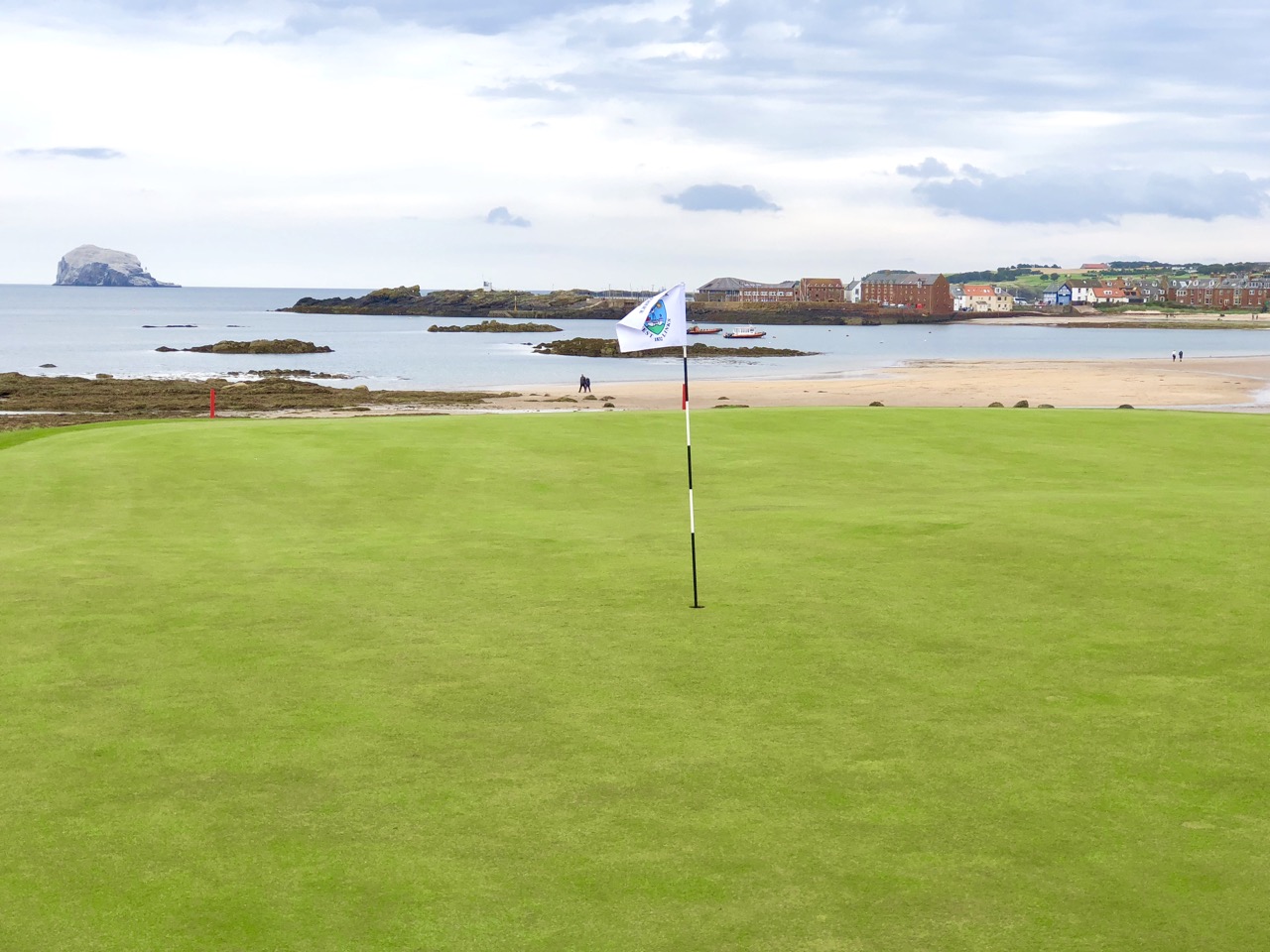 The town of North Berwick and Bass Rock form the background for one of golf's most famous courses.
On Tuesday, I had my fill of creative shots at Dunbar Golf Club. I repeated the now familiar routine of walking with clubs to the Waverley train station, buying a round-trip ticket from an easy-to-use machine and heading for Dunbar, about 13 miles south of North Berwick along the same coastline. Even though a longer distance and slightly more expensive trip, the train made only one stop, in Musselburgh, and arrived at Dunbar a few minutes faster than the trip to North Berwick. The trip from Dunbar’s train station to its eponymous golf club required a taxi for the five-minute ride. The golf course may not get the attention of North Berwick, but it costs about half the price (80 UK pounds, or around $100) and is actually in better condition, the greens much slicker and smoother than those at North Berwick.

My golf ball in ruins
Walls again play a great part in a round at Dunbar, with a particular stretch of par 4 holes late on the front nine presenting the most-narrow fairways on the course, the wall encroaching on the right. (Of course I chose one of those holes to hit my only slice of the day out of play.) But it was another feature, on the par 3 10th hole that I will not soon forget. The long par 3 at 202 yards required a three wood shot that I pull-hooked short and left of the green –- into the ancient ruins of what must have once been someone’s home overlooking the North Sea. Miraculously, my ball bounced off the old stones onto a perfect patch of grass far enough away from the house’s southern wall that I was able to lob a 20-yard shot onto the green. (If I had made the putt for par, I certainly would have been regaling friends back in the States.) 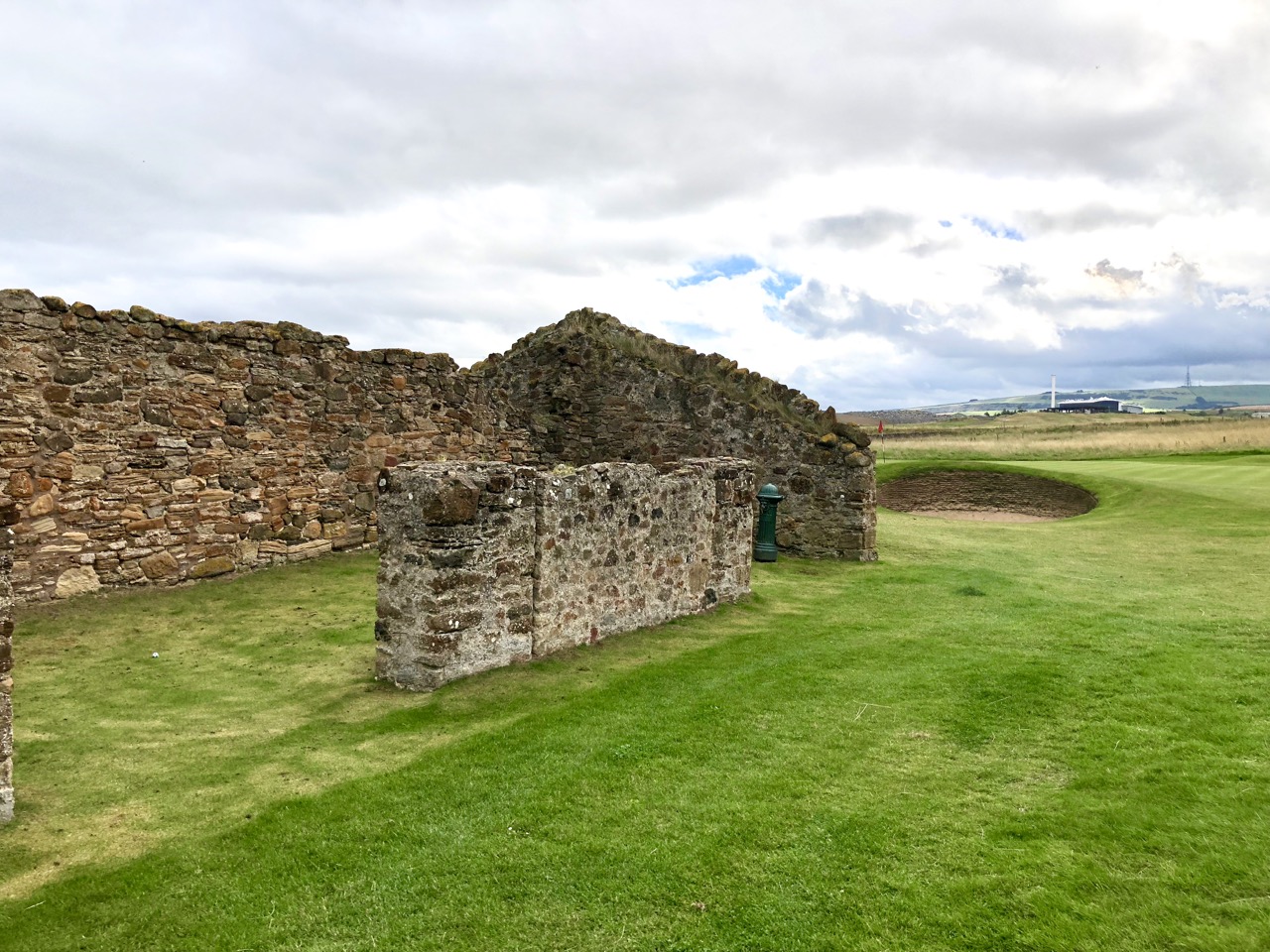 If you look closely, you will see a ball at rest inside the ruins of an old home on the Dunbar golf course. It's mine. I was able to loft it over the wall and onto the green, but missed the putt. Nevertheless, it may be the most unusual shot of my 60-year golfing experience.
It is the North Sea, as it is at North Berwick, which provides most of scenic drama on the layout, although only bits and pieces of it come into play. Oddly, the fierce gale winds that kicked up on the back nine blew toward the ocean, not from it, and they were the strongest I have ever played, a good and steady 35 mph or so straight at us on virtually every hole on the incoming nine. (Typical “links” courses are laid out with nine holes heading directly away from the clubhouse and the second nine pretty much straight back in.) On the par 3 16th, called “Narrows,” I hit my 170-yard club toward the green 145 yards away, probably my best strike of the day. I had figured on about a three-club wind, and my playing partner, from England, was sure it was going to find the middle of the green. But we watched as it floated back in our direction and landed 15 yards short. 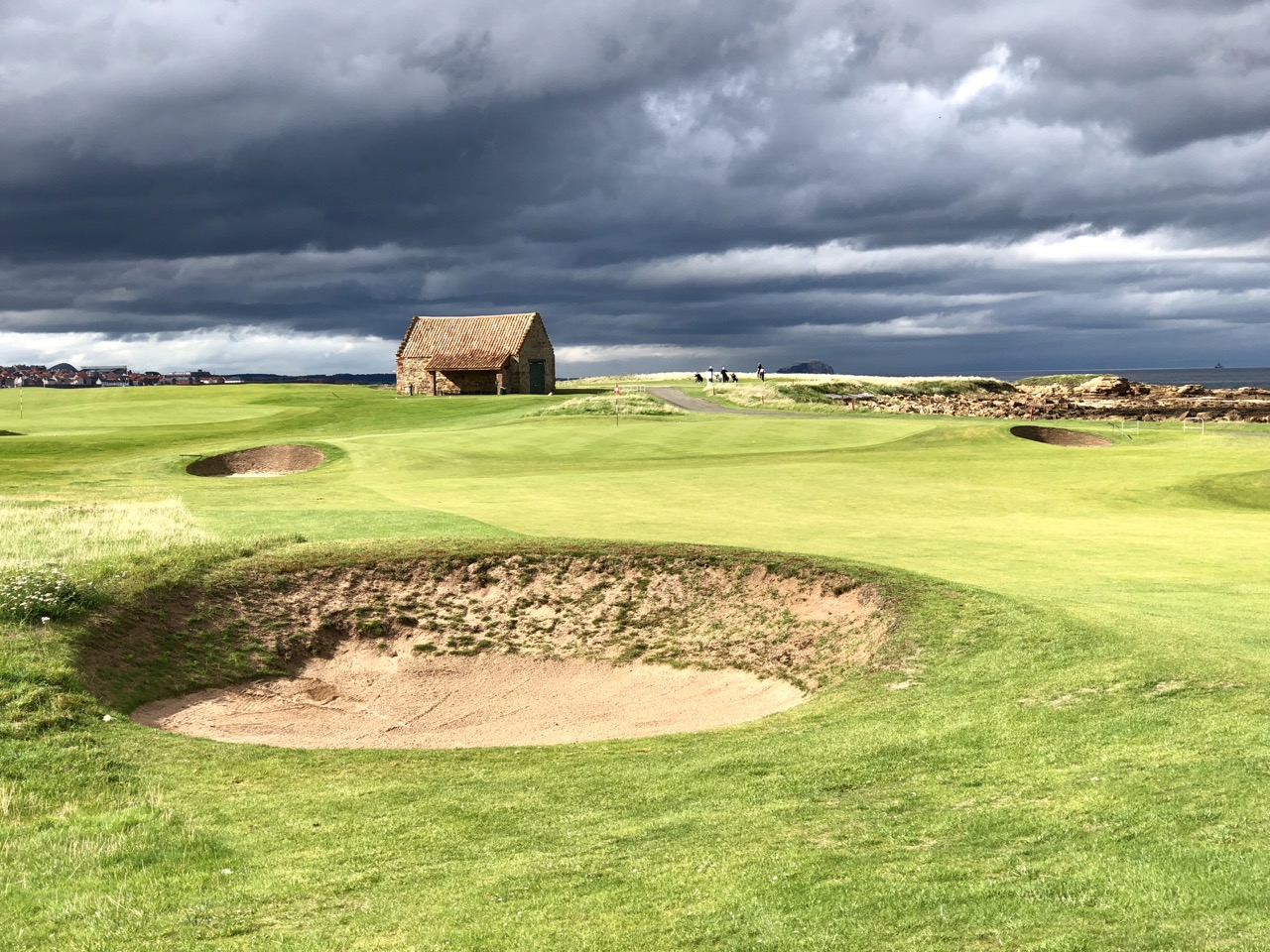 North Berwick and Dunbar share something of a "micro-climate" along the North Sea. Skies may look threatening, but quite often any rain in the area is carried across the Firth of Forth.
For my three-day stay in Edinburgh, these two courses were a perfect choice. But you could easily spend a week using the city as your hub and playing excellent layouts of all stripes. Although North Berwick is not in the Open Championship rotation, it does host the qualifier whenever the event is held at nearby Muirfield. Muirfield, though expensive, could certainly anchor the high-end of any golfing week in the area. Yet there are plenty of fine alternatives, including the historic Old Musselburgh Links, allegedly the oldest course in the world (but only nine holes); Royal Musselburgh Golf Club, which has its own storied history; Gullane, with its three courses by the sea (including Gullane No. 1, host to the Scottish Open); the Archerfield Fidra Course, positioned between Muirfield and North Berwick, which gets its name for a large rock island (Fidra) within site off the coastline; Bruntsfield Links, which was redone in 2017 and is parkland in style; and at least a dozen other viable options within a reasonable distance of the center of Edinburgh.

I did a quick check of golf packages in the area, and they tend to run from 100 British pounds per night on up for lodging and golf and, in many cases, extras such as breakfast. One package that starts at 150 pounds, called the Scottish Links Experience, includes Kilspindie, Gullane, North Berwick, Glen Links and Longniddry Links, all an easy train ride from Edinburgh. Just Google “Edinburgh Golf Packages” for a range of options.

More in this category: « Last Round, Last Laughs Golf, a Miracle Cure for What Ails Ye »
back to top
Back to Top