Test Your Assumptions Before Retirement

A special section of the Wall Street Journal on Monday has me thinking about assumptions I made about my retirement just a few years before I actually retired. The "Journal Report on Wealth Management" contains an article about “testing” your financial life; the article runs through five contrary scenarios – e.g. “Spending on the Usual vs. New Experiences” -- making the good point that sometimes what you assume is not related to what you will really want in retirement.
Suffice to say that if you are in retirement or even pre-retirement mode, you might want to test your assumptions about your future interests by simulating two opposite scenarios.
Here’s two personal examples of how I might have benefited by testing my own assumptions back in 2000: 1) That I would play golf at least four times a week in retirement and 2) That my wife and I would use our vacation condo at least four months per year. The two scenarios are inextricably tied. My wild miscalculation turned out to be expensive.
Eighteen years ago, my wife and I decided to purchase a condo in Pawleys Island, SC, and took the developer up on an offer to pay for half the initiation fee for golf membership. That “saved” us $7,500. I figured at the time we would spend a few months at Pawleys Plantation and I would play golf there four times a week. As it turned out, we have spent an average 10 weeks per year in our condo, and I have played at most two rounds per week, more often than not just one. Dues have ranged from $200 per month to $275 over our 18-year ownership. Quick back-of-the-napkin math indicates I played 15 rounds per year at a cost of more than $2,500, or $167 per round. I would have been better off not joining and paying the going rate to play, which averages less than $100 throughout the year. 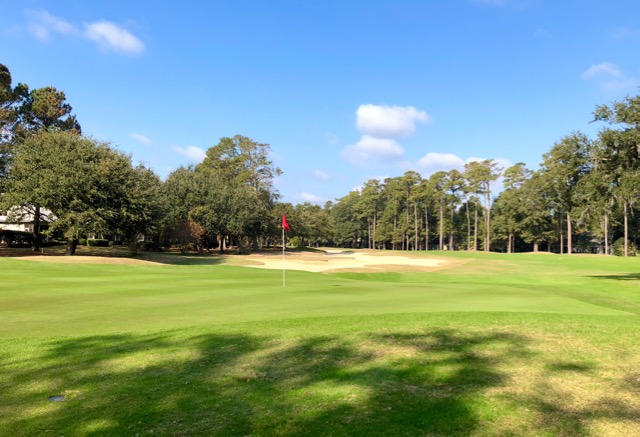 From behind the par 4 12th hole at Pawleys Plantation in Pawleys Island, SC
I have the usual excuses about my miscalculation.  Our home in Connecticut required more attention, our kids were not quite out of the nest yet (they are now), doctor's appointments and even a dog who was medically challenged.  Life has a tendency to intrude on the best laid plans.
I never tire of playing the Pawleys Plantation golf course, a terrific Jack Nicklaus layout. But our condo is within 10 minutes of a dozen other excellent courses and within an hour of nearly 100 others. If I had turned down the developer’s offer of membership and, instead, tested my assumption that I would play dozens of rounds each year at Pawleys Plantation, I could have saved myself a lot of money over the years and enjoyed many more of the golf courses in the Myrtle Beach area. As it turns out, I would have saved on initiation fee too if I had waited; last year, the semi-private Pawleys Plantation reduced its overall initiation fee to $2,500, a bargain for those who can play a couple of rounds per week there throughout the year.
In short, don’t assume you will play as much golf in retirement as you think you will, and if you buy a vacation home, don’t think you will spend as much time there as you plan. Figure out a way to test your assumptions to make sure that real life doesn’t intrude on your dream life or, if it does, that you won’t pay too dearly for the lesson.

More in this category: « A golf community lawsuit worth watching Golf is Dead? Not in Connecticut »
back to top
Back to Top