Movin’ on up…to the next tee box

The sign that greets golfers at the back edge of the 1st tee at Pawleys Plantation in Pawleys Island, SC, does not bear a skull and crossbones. Nevertheless, it quietly screams, “Ignore the distances and play the tee boxes appropriate to your true handicap.” But even that cautionary sign underplays the difficulty of the golf course, especially for those of us who no longer drive the ball much more ten 200 yards off the tee.
Up until I reached the age of about 60, I played the blue tees at Pawleys, at a total distance of 6,549 yards. I carried about a 10 handicap and, according to the course rating of 73.7 from the “Heron” tees, as they are called, I should have threatened a score of 80 or less nearly half the time.
I didn’t; indeed, I hardly shot below 80 10% of the rounds I played. When I became Medicare eligible, I gave up my false notions of masculinity and moved to the white tees, with a total yardage of 6,184. The length of my best drives had dropped to around 220 yards, making the approaches to many of the greens when I played the Heron tees a choice between 3 hybrid and 3 wood. That was not much fun. When you look at the scorecard, you understand that a 10-handicap golfer might also be biting off more than he can chew from the white tees; the rating is a solid 72.0 but the Slope is 139 which, in practical terms, means the golfer will pay dearly for any balls hit off line. 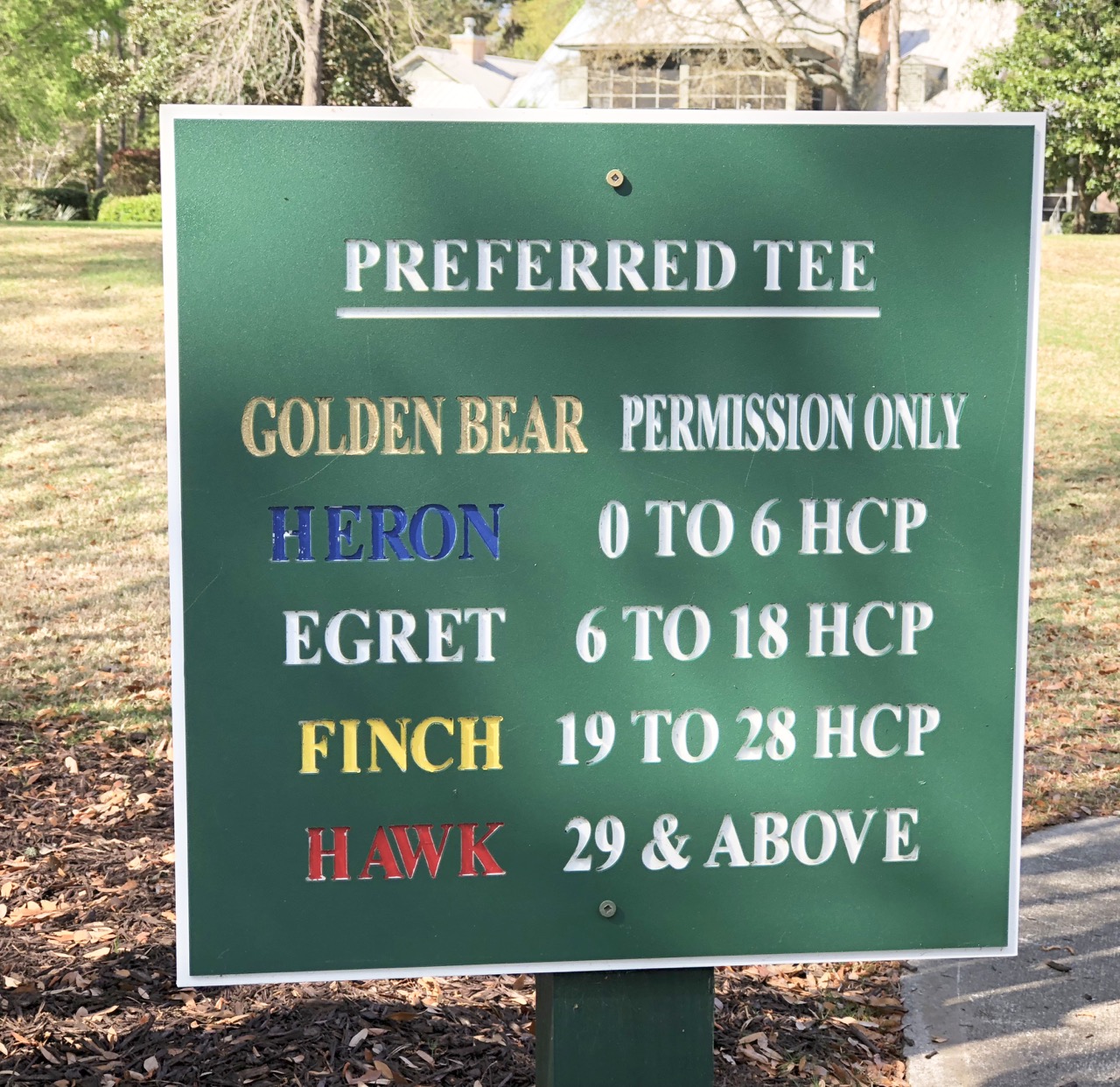 The sign at the first tee at Pawleys Plantation Golf Club implies that choosing the wrong tees could make for a miserable day of golf. But Pawleys is a course where length off the tee is important, and an aging golfer who carries a low double-digit handicap but can't drive a ball much more than 200 yards will find the forced carries to many greens daunting. My advice, based on experience:  Move up one tee box.
As I approach my 70th birthday in a couple of weeks, I’ve decided to move up to the “Senior” tees at 5,560 yards, a decision that was the toughest of all for me since some of these “yellow” tee boxes are set just behind the Ladies tees. (I hope that doesn’t sound chauvinist; I don’t mean it to.) The decision was hastened by the need to get in some practice rounds from the yellow tee boxes for the upcoming club senior championship, which I am playing for the first time. Still, the total distance from the yellows is longer than the card indicates because of the forced carries over water and bunkers on this particular Jack Nicklaus golf course. As you will note from the photo, Pawleys Plantation recommends a handicap from 19 to 28 for the yellow, or “Finch” tees. That is way off the mark for aging golfers who cannot hit the ball as far as they once did.
Those “Senior” tee boxes carry a rating of just 69.2 but a slope of 132, still significantly higher than many of the public and muni courses many of us play regularly. The layout from up closer also adds some idiosyncrasies like big trees in the line of your drives that don’t come into play from the tees farther back and have forced me to keep driver in my bag on some 350 to 360 yard holes. And the shorter distances still do not eliminate the need for forced carries over water and sand –- in some cases, both –- to reach the putting surfaces on many of the Nicklaus holes.
In effect, a few of the holes from the yellow tees carry more risk than do those from the white tees. I know that from the experience of just a few rounds; from the senior tees, I haven’t broken 85 yet, still carrying my 10-handicap. But I have improved each round, and I am salivating at the prospect of having a really good round on a tough course from just 5,500 yards.
And that will keep me coming back for more.
Note:  Our friend Brad Chambers, at ShootingYourAge.com, started a similar discussion recently about when to move to the senior tees.  Check it out by clicking here.

More in this category: « Free Cost of Living Calculators Helpful...When Used in Combination Interstate Migration: Gettin’ a Move On Becoming a Trend »
back to top
Back to Top